Daniel Andrews is the most powerful premier in Australia. Eight years in office, a struggling opposition, a lack of internal challengers, and the departure of former allies who became snipers and critics leave him untroubled by predators. But those apparent advantages can be disadvantages.

Tellingly, New South Wales Premier Dominic Perrottet, who will mark his first year in office in October, flew to Melbourne this week to flank Andrews for their combined healthcare announcement. The semiotics were of an apprentice sitting with the master. 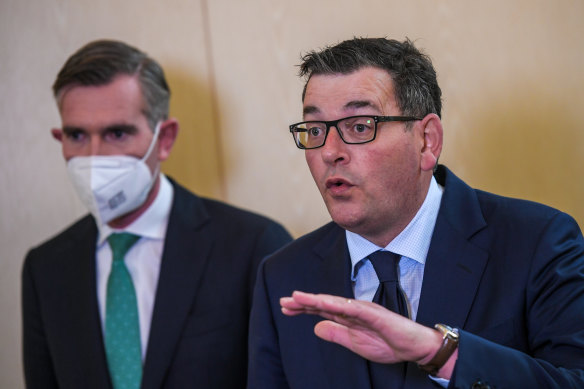 To the acute annoyance and embarrassment of Victorian Opposition Leader “Matt” Guy, his fellow Liberal visiting from Sydney all but endorsed Andrews’ leadership. Answering media questions about their bromance, Perrottet said: “I’m sitting here with a premier who wants to get things done and look after his people.”

Don’t hold your breath waiting for Andrews to reciprocate and campaign for Perrottet in the close contest that will be the NSW election on March 25 next year.

Close watchers of state politics will wonder why the health ministers for Victoria and NSW were not dispatched to announce the new GP clinics. Instead, it was the two premiers, each with an eye on their prospects at looming polls.

An already much-remarked upon legacy of the pandemic is the realignment of our federal structure. State and territory leaders – predominantly now from the ALP – are co-operating with each other more than ever before, with much higher public engagement and thus recognition. 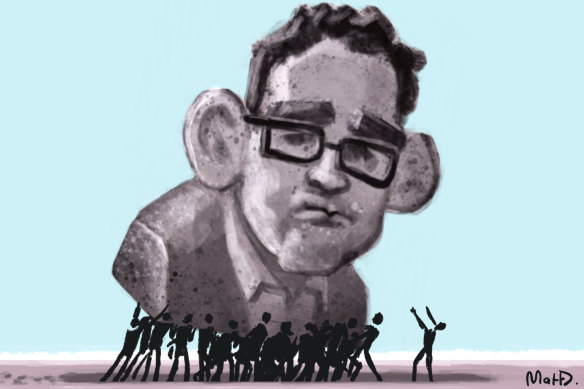 ALP insiders acknowledge that Andrews performs better when he is under pressure.Credit:Matt Davidson

Less recognised is that during the pandemic, Andrews did what many thought was impossible by even further concentrating Victorian government decision-making into his own expanded private office.

Governance in Victoria today has become even more centralised than during the peak of the Kennett regime more than 20 years ago, when staff jokingly referred to ministers as “warm props” to the dominant premier.

Just like 20 years ago, resentment again simmers within government ranks over the absence of autonomy. Even senior figures have to tolerate significant delays as decisions and announcements are vetted, approved and often taken over by the premier. Relentless central control has again become the norm.

Need we be reminded that the last time this happened in Victoria, it did not end well? The then Bracks opposition characterised the Kennett Coalition as a one-man band. And a noisy one. 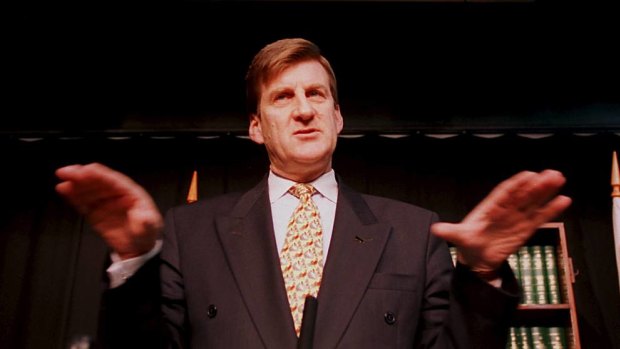 Jeff Kennett was referred to as a one-man band during his time as premier.Credit:Andrew De La Rue

Micromanagement takes its toll. As Andrews’ private office grows in both number and influence, they need to balance the risks. On the one hand, it avoids the common syndrome for loose governments where the left hand does not know what the right hand is doing.

It also allows the “daily announceables” to feature the premier by cherry-picking the events and stunts prepared for all ministers across the entire operation of government. Mental health one day, a factory or a TAFE the next, infectious diseases research the day after and then a touch of footy fever just to round out the leader’s image.

Months of planning means we are set for a relentless barrage of scheduled events for next 90 days until we vote. The premier will star in back-to-back photo opportunities as he gets out and about, denying the opposition – and his colleagues – any media oxygen.

Centralised control not only slows decision-making, it also leaves ministers and senior public servants feeling disempowered, relegated to simply managing what is approved and endorsed elsewhere.

At the request of the Upper House, where the ALP does not command an outright majority, Ombudsman Deborah Glass has started an inquiry into the politicisation of the public service. Over eight years in office, the ALP has gradually installed those with a sympathetic mindset and a values match, if not actual Labor Party membership, across the broad operations of government. That is not in any way surprising – it is the very point of getting elected and wielding power. But it carries risks.

When Scott Morrison took on additional ministerial powers without any apparent objection from his departmental head, we saw how the absence of an independent public service can remove one of the essential structural checks on power. Loyalty to a leader or party ought never supplant serving the public.

ALP insiders acknowledge that Andrews performs better when he is under pressure. It would benefit the government if there was a stronger opposition.

His dominance leaves the ALP vulnerable to the “one-man band” critique, more so with the retirement of respected former deputy James Merlino and with whispers of a Kirribilli-style succession deal with new Deputy Premier Jacinta Allan. Those who have been on the wrong side of Andrews are mischievously predicting he will never hand over power, regardless of any promises made.

Victorian premiers who serve 3000 days in office are entitled to a statue in Treasury Place. Of 30 who have occupied the office since Federation, only four have qualified – Albert Dunstan, Henry Bolte, Rupert Hamer and, through the 1980s, John Cain. If re-elected, Andrews would pass the 3000-day milestone in February 2023. And after that?

During the COVID-19 crisis, Andrews’ attitude was that if his political fate was to be decided by how the pandemic was managed, then he would personally take charge and not allow his fate to be determined by how competently someone else did their job.

If the latest opinion polls are accurate, that strategy would seem to be working.