Follow
Home » World News » ‘This is not life’: Afghan doctor’s desperate bid to rescue his family

‘This is not life’: Afghan doctor’s desperate bid to rescue his family

Mustafa* has the haunted look of a hunted man.

“I can’t live this life; because this is not life,” he says.

Mustafa’s life in Australia is spent in the anguish of constant worry. 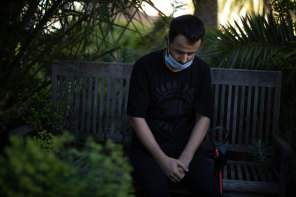 He checks his phone reflexively, weeping over graphic photos of loved ones he says were killed or injured by Taliban forces, including horrific images of a little girl’s tiny body. He is in constant physical pain from a chronic injury. Beside his bed are piles of medications for depression and post-traumatic stress disorder, and a dog-eared medical textbook.

Mustafa, 38, has the elegant, long-fingered hands of a surgeon. He was a surgeon once, performing hundreds of operations – perhaps as many as 1000, he says – at one of Afghanistan’s top hospitals. But one day, three near-dead Taliban fighters were rushed in for treatment and everything changed.

“I call to the police: ‘Why you bring them here to us to die, it is not good for us’,” he recalls.

The men did die and almost at once, Mustafa says, his life was also in peril.

Blaming Mustafa for the men’s deaths, militants from the Haqqani Network, closely aligned with the Taliban, made repeated attempts on his life. Mustafa says bombs were affixed to his house and he was shot on three separate occasions, surviving bullet wounds to his abdomen, chest and left leg.

He spent two years in fear for his life before fleeing the country and resettling in Australia.

Thousands of Afghan-Australians are now enduring the same anguish, watching from afar as their former homeland again falls victim to Taliban control.

Almost 200,000 people, including Australian of the Year Grace Tame, have signed a petition calling on the federal government to increase the number of refugees Australia will accept from Afghanistan from some 3000 to 20,000.

Arif Hussein, a senior solicitor at Refugee Advice and Casework Service, is part of the Afghanistan-Australian Advocacy Network, which is campaigning for a greater intake of Afghan refugees and for family reunification of those already here.

This month marks the 20th anniversary of former prime minister John Howard launching Australia’s involvement in the war in Afghanistan.

“Since then, every single prime minister we’ve had has talked about our commitment to the Afghan people in terms of women’s rights and the rise of girls getting education and minority rights, and that’s been one of the reasons why we’ve remained there for 20 years and some of the reasons we deployed – over 20 years – 39,000 troops,” Mr Hussein said.

“So we are asking for Australia to be the lifeline that it promised to be over the last 20 years.”

What most tortures Mustafa is the thought that with him out of the country, terrorists have turned their sights on his family. Since the Taliban took control of Afghanistan, he says militia have killed three members of his family in payback – his brother, his brother’s wife and a niece aged just 18 months. He shows a photograph on his phone of the toddler’s burnt body.

After Afghanistan fell to the Taliban in August, fighters came to Mustafa’s family home searching for him. When no one opened the door, he says, militants burst open the door with explosives, killing his tiny niece.

His family scattered and the fighters took control of the home, raising the Taliban flag. They killed his dog.

Mustafa says his wife, mother and other family members remain in grave danger. His teenage nephews have been seized and whipped – more photographs are produced of terrible injuries. Several family members are missing, presumed killed.

Mustafa says two bodies were recently returned to his family, which the Taliban told them belonged to his brother and sister-in-law. The bodies were so badly burnt his family still can’t be sure who they belonged to.

Mustafa escaped Afghanistan on the advice of the then-interim government in 2014, accepted by Australia as a refugee after he spent five years in Indonesia waiting for resettlement.

All Mustafa can do is wait.

“I told them, ‘If you cannot bring them, just let me go home because otherwise they kill everyone’,” he says. “‘I don’t care, I will give myself to them. Just don’t punish my family again’.”

A Department of Home Affairs spokesperson said the government would consider increasing the number of Afghans granted humanitarian visas within the visa program’s 13,750 cap, and also increasing the cap itself.

* Name has been changed to protect Mustafa’s family