This is our challenge 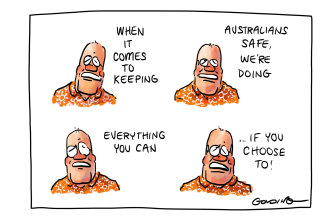 To submit a letter to The Age, email [email protected] Please include your home address and telephone number.

This is our challenge

Barney Zwartz (“For many, there is still ‘no room at the inn’”, Extra, The Sunday Age, 19/12) writes a poignant essay that obliges us to reflect on a world where millions of people are seeking asylum from war, poverty, dispossession and much more and cannot find a “room at the inn”.

Yet in many wealthy countries, such as Australia, we continue to abstain from generosity and justice for those whose plight in seeking a haven is denied.

Many Australians describe themselves as Christians, and Christmas offers all of us, Christians and non Christians, the opportunity to pause and evaluate our principles and how we live by them on a daily basis.

Padraig O Tuama, an Irish poet, poses a challenge, “it is in the shelter of each other that people live”.
Judith Morrison, Nunawading

Let’s see the advice
Today, up to 70,000 will be seated at the MCG alongside each other for most of the day and not required to be masked. If I sit next to a fellow parishioner at a church service of about 100 people for less than an hour, I am required to wear a mask.

How does that work? Can the medical advice be provided for this.
Martin Newington, Aspendale

Expectations not met
Osman Faruqi (“Testing times after failure to invest”, Comment, 24/12) is spot on. As a GP for more than 40 years I can attest to the whittling away of two of Australia’s key health pillars: General practice and the public hospital system.

Even before the cynical 2013-19 Medicare freeze (what could GPs do, abandon our communities and strike?), there was widespread agreement that primary care was significantly underfunded, and like all GPs I spend many hours trying to negotiate an increasingly broken hospital system for my patients: emergency departments on bypass; waiting lists extending to years for the appointment that just gets the patient on to the even longer surgical waiting list; overworked and burnt-out hospital doctors and nurses trying to do their best with inadequate resources.

Money is, alone, not the answer. But it is a big part of it and the rest of it involves less rhetoric and some heavy lifting by our well-paid pollies.

It’s not hard, Mr Guy. For or against?
Peter Randles, Pascoe Vale South

The threat is real
Marish Mackowiak (“Treat everyone equally”, Letters, 24/12) floats the notion that keeping the Jewish community “on side” is the reason for subsidising security at vulnerable Jewish establishments.

It is an absolute shame security is required at all and it would be wonderful to be able to dispense with it.
However, unfortunately, the threats of violence against Jewish establishments are ongoing and increasing – and they are well documented. To remove security could well lead to tragedy and without subsidy, security could not exist.

Mr Mackowiak’s comparisons with the Greek, Italian and Lebanese institutions is erroneous. Fortunately, they are not under such constant threat.
George Greenberg, Malvern

A predictable response
The call for the release of documents related to the disgraceful robo-debt debacle has been met with the usual disingenuous response that releasing such documents “would threaten the ability for public servants to give frank and comprehensive advice” (“Fight for secret documents behind ‘robo-debt’ decision”, online, The Age, 23/12).

The current highly politicised and fearful public service environment is more likely to be the biggest threat to them giving “frank and comprehensive advice” than fear of disclosure.

Politicians have and will continue to misuse privacy and freedom of information laws to deny taxpayers any opportunity to see their political motivated machinations at work in the public service. Public servants, on the other hand, would probably love to expose their political overlords through the release of such documents.

So much for “nothing to hide, nothing to fear”.
Stephen Farrelly, Donvale

Heaven help us all
Chief Health Officer Brett Sutton’s advice to the Victorian government to re-introduce density limits for the safety of the whole community has been ignored (“Toughest mask rules as virus marches on”, The Age, 24/12).

This is pure stupidity. Surely it is common sense to take a doctor’s advice rather than a politician’s when it comes to our health.

Joining the dots
If the Prime Minister really has to compare masks to sunscreen, he might want to remember that well more 1000 Australians die each year from melanoma, a disease largely preventable by taking sensible precautions.
Jill Rosenberg, Caulfield South

It’s hardly reassuring
In wartime, a convoy of ships could only travel as fast as the slowest vessel. In any communal gathering these COVID days, we are only as safe as the level of precaution of the least responsible person presents.