The bluestone pub in Macarthur has been a welcoming wayside stop on the road from Port Fairy to Hamilton since it was built in 1869 and named The Travellers Rest.

A century and a half on, it has become not just a resting place, but a sanctuary for restless travellers seeking peace after serving in wars. 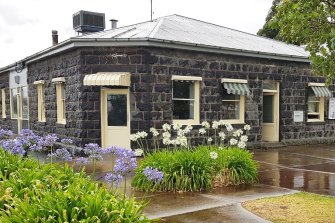 On cool evenings, veterans of conflict in Vietnam, Iraq and Afghanistan gather around a campfire in the hotel’s grounds and share stories of experiences that – perhaps mercifully – are denied the rest of us.

Sometimes, a homeless veteran who has found asylum in a room at the old pub will join those who have stopped by.

This, however, is no longer the Macarthur Hotel, nor The Travellers Rest.

It is the Cockatoo Rise retreat for veterans.

On Saturday [March 6], hundreds of veterans and guests will gather for the official opening of Cockatoo Rise, effectively doubling Macarthur’s population, which stood at 522 in the 2016 census.

It will be quite a departure for a place dedicated to peace and quiet.

Senator Jacqui Lambie, who served with the Australian Army for 11 years and has become something of a champion of veterans, will be guest speaker.

More than 100 veterans wearing their medals, 50 Vietnam War veterans on powerful motorbikes, riders in the regalia of the Light Horse, drivers in army vehicles and cadets from Hamilton and Warrnambool will take part in the ceremony. A memorial stone will be blessed and wreaths laid.

Greg Carter, who served as a mortarman with Sixth Battalion, Royal Australian Regiment in Vietnam in 1969, bought the vacant hotel in Macarthur, western Victoria, 14 months ago with the intention of establishing a retreat and a military museum.

The intervention of the coronavirus pandemic meant the museum had remained closed, but veterans have sought out the retreat for many months.

Most bring caravans and are accompanied by their spouses. Homeless veterans have stayed up to nine months at a time until, Carter says, “they feel comfortable enough to go back into society”.

Carter believes almost everyone who has been exposed to war zones suffers some level of post-traumatic stress disorder. Though he professes no training in psychology, he is convinced veterans are most comfortable talking to other veterans, some of whom harbour thoughts of suicide.

“I don’t know that it can be demonstrated, but I have no doubt this place saves lives,” he says.

“Sitting around a campfire with people who have gone through the same sort of experiences as you have … it’s the best therapy ever.”

He believes little Macarthur is ideal because it is so quiet.

“Some of the guys who come here are in a delicate state and can be set off if they are awakened by any sort of noise in the middle of the night,” he says.

Carter ran a similar retreat in Bairnsdale for 15 years, but has never received government funding or the support of the RSL’s Anzac House, which holds that a private operation does not meet the criteria for access to its rich Patriotic and Welfare Fund.

The Bairnsdale retreat was also called Cockatoo Rise, and Carter says he felt he had been led to the right place when he arrived in Macarthur and a flock of perhaps 500 cockatoos flew over the hotel and roosted in the big old trees nearby.

Lives:, place, Saves, This, Ways
You may also like: