Nearly a third of people aged 25-34 stash their cash at home because they no longer trust banks, study finds

Almost a third of people aged 25 to 34 prefer to keep cash at home as they no longer trust high street banks, a new study has revealed today.

The survey shows high street banks are losing the trust of their customers who feel they prioritise profit over good service.

Commissioned by non-fiat banking platform Tally, it found that four in ten of the 2,001 people asked (42 per cent) believe traditional banks make their money through ‘hidden charges’.

Meanwhile more than half of those polled (51 per cent) feel big banks do not put customers first.

Distrust of mainstream banking is widespread but more prevalent in the younger generations who are open to alternative financial services and products.

Of the adults surveyed by Opinium, almost a third (28 per cent) say they do not trust high street banks which rises to 38 per cent of 25 to 34-year-olds. 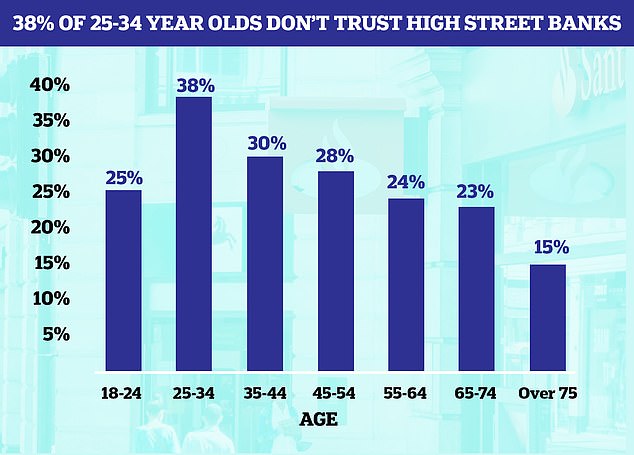 Almost a third of people aged 25 to 34 prefer to keep cash at home as they no longer trust high street banks. Pictured: the data shows distrust over banks is highest among the age group 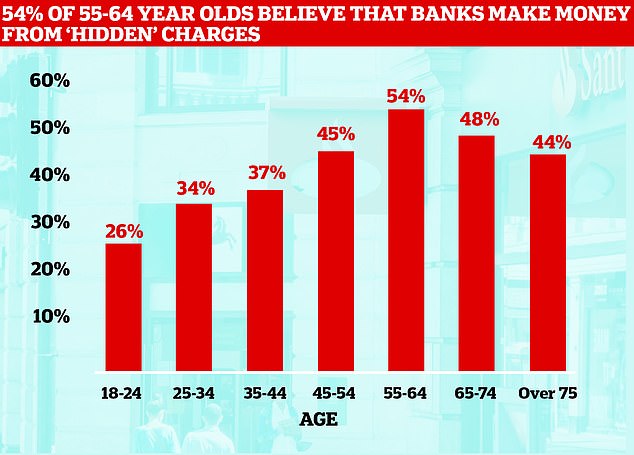 In a survey carried out on behalf of Tally, data shows more than half of those aged between 55 and 64 believe that banks make most of their money from hidden charges for customers

As a result of the last 12 months of the pandemic which has seen inflation rise, a third of people expressed fears over the security of their money which rose to almost half of 18 to 24-year-olds.

The survey revealed some are so worried they prefer to keep their physical cash at home instead of trusting a bank.

Overall, 16 per cent keep their cash at home, rising to almost a third for the 25 to 34-year-old age bracket.

In addition, nearly a quarter (22 per cent) limit the savings they keep in banks because they do not trust the banking system

Many of those questioned are open to using alternative forms of money and currencies (38%) if the safety of their money is guaranteed.

More than half of 18-24 year-olds (53 per cent) would use an alternative currency to protect and spend their savings. 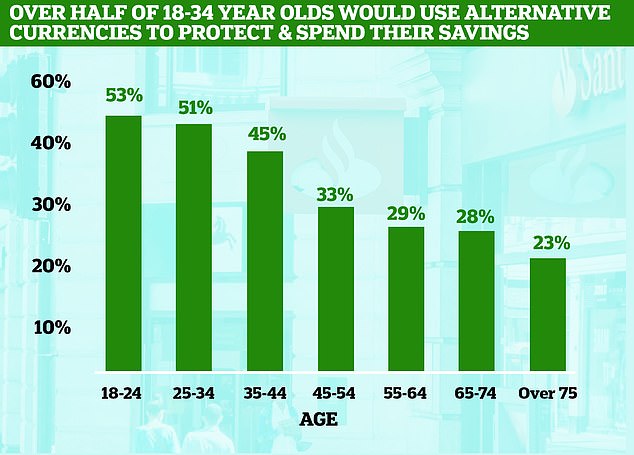 Cryptocurrencies such as Bitcoin were not seen as reliable, with only 14 per cent saying they were safe to be used as money.

However, a currency backed by a physical asset – such as gold – was seen as a safe option, with 56 per cent opting for this as their favoured alternative.

Cameron Parry, founder and CEO of Tally, said: ‘There’s a disturbing lack of transparency when it comes to the incumbent banking system and it’s understandable why most people have little idea of how they are being used by banks to make money.

‘People should be able to rely on the money in their bank account to maintain its value over time and stay in their control at all times.

‘The coming consequences of rampant money printing and near-zero interest paid on savings, together with the uncertain economic outlook, means it’s crucial to protect your earnings from being undermined by inflation. And this is where fiat currency banking fails.

‘Whilst the data tells us that people are not only misled or misunderstanding the fiat currency fractional-reserve banking system, it is encouraging that they are looking for mainstream alternatives, and Tally is proud to be a leader in that changing landscape.’ 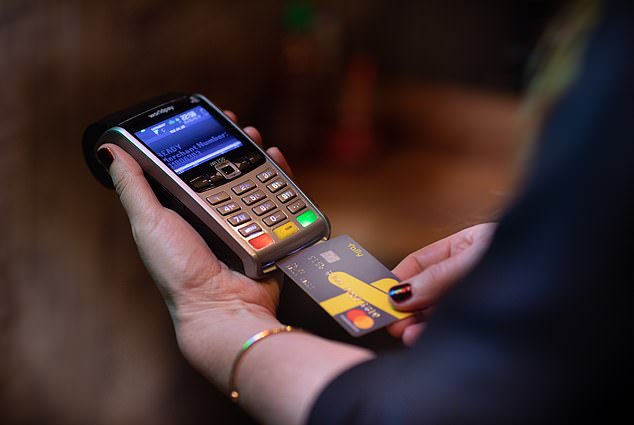 While overall, 16 per cent keep their cash at home rather than in a high street bank, this rises to almost a third for the 25 to 34-year-old age bracket, the study on behalf of Tally has revealed

It has been developed in response to economic uncertainty, inflation, and a climate where banks are paying almost nil interest in traditional savings accounts.

Because a Tally account is not denominated in government-issued (fiat) currency, such as pounds, it’s a much safer form of banking, according to the team behind the platform.