Police are to be forced to give a huge payout to a thug who stormed round to his ex-girlfriend’s home wielding a fake submachine gun – after an armed officer accidentally shot him in the leg.

Aaron Humphries, 32, sparked panic when he was spotted sitting in a car holding the 2ft-long fake weapon.

It turned out to be a BB gun but armed cops dashed to the scene after receiving a 999 call from a terrified passerby.

Police sealed off Ronkswood Hill in Worcester and ordered Humphries to get out of a white BMW he was sitting in.

A witness filmed the moment a female officer’s gun went off by mistake. The bullet went through the car door and ricocheted into Humphries’ right leg.

Humphries was rushed to the Queen Elizabeth Hospital in Birmingham with life-changing injuries before being charged by cops.

He admitted possession of an imitation firearm and criminal damage following the incident on October 2 last year. 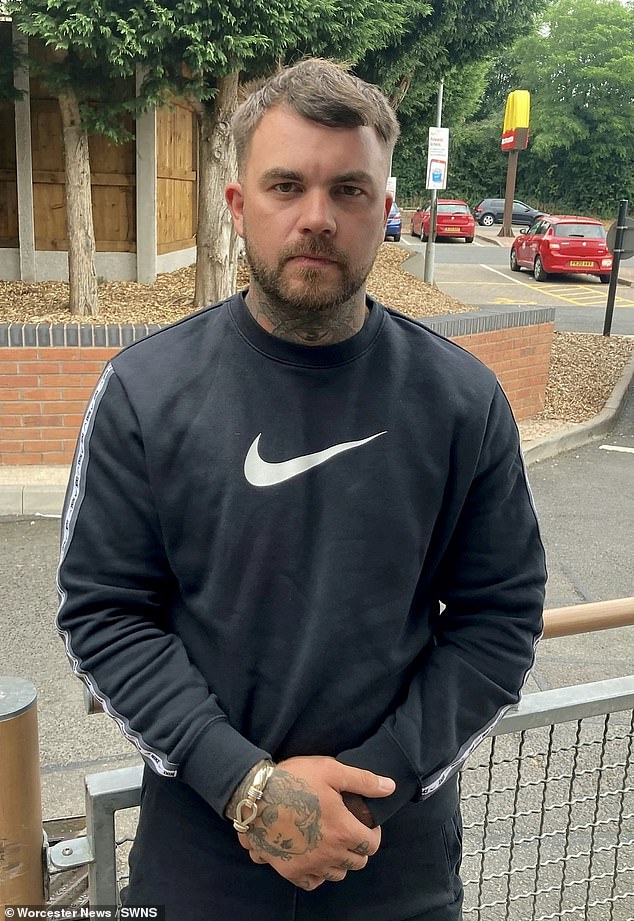 Aaron Humphries, 32, sparked panic when he was spotted sitting in a car with fake gun 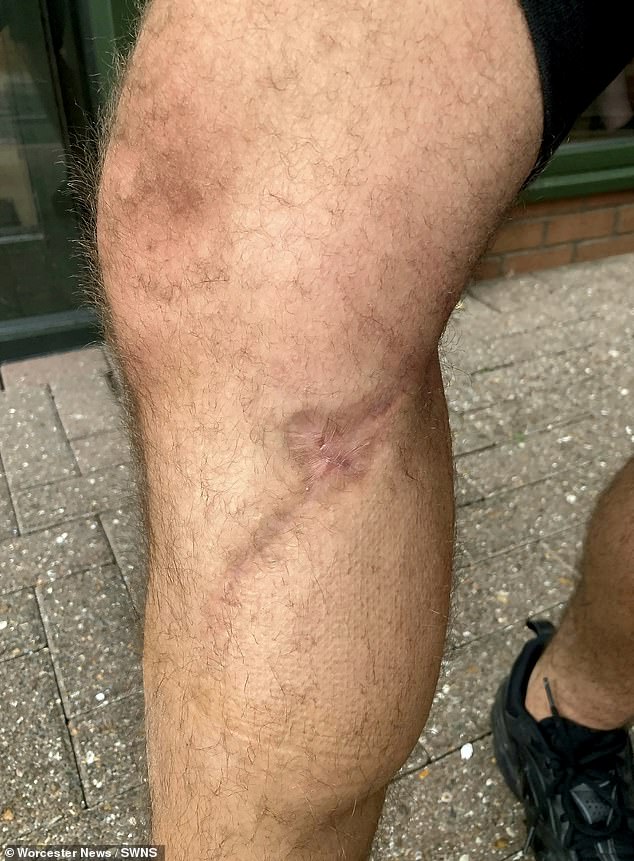 The court also heard Humphries had become ‘paranoid’ after taking drugs and had been caught growing 33 cannabis plants in a tanning salon in Worcester.

In January this year the dad-of-three was sentenced to 20 months in prison suspended for two years at Worcester Crown Court.

claiming he struggles to walk and was forced to give up his £45,000-a-year Civil Engineering job.

The case is currently being heard in the High Court where the force admitted liability for battery.

His solicitor Iain Gould says he is likely to receive a significant compensation payout as a result of his ‘horrendous injury’. 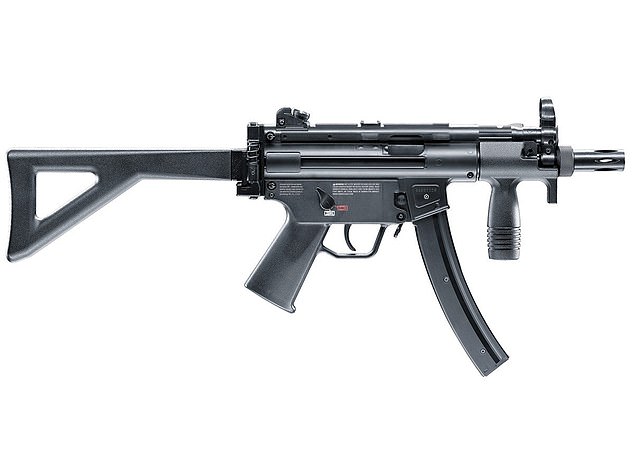 Mr Gould said: ‘Aaron, who had fallen asleep in his car, awoke to the sound of shouting and realised that his vehicle was surrounded by police officers who were training their firearms upon him.

‘In a state of shock, and following commands given by the firearms squad, Aaron

exited his vehicle and stood by the open driver’s door.

‘He was holding nothing in his hands, a fact which was clearly visible to the police.

‘One of the officers approached Aaron with handcuffs, whilst another approached with a taser; ‘red-dotting’ Aaron with the less lethal weapon.

‘Aaron remained fully compliant. Then, without warning, he was shot by one of the officers (identified as Officer B) with her carbine, a lethal weapon.

‘The bullet from Officer B’s carbine punctured the open door of Aaron’s car, hit Aaron’s left knee and then tore through his right leg, creating entry and exit wounds.

‘Aaron fell to the floor, bleeding and in excruciating pain, before being rushed to hospital by ambulance for emergency surgery.

‘Following the incident, Officer B was interviewed by the IOPC (Independent Office of Police Conduct).

‘Her account of events was that she accidentally fired her carbine whilst holding a large, heavy shield in her left hand and trying to apply the safety catch with her right hand.

A misconduct panel concluded that Officer B’s conduct had not breached the Standards of Professional Behaviour but revoked her firearms licence.

Mr Gould added: ‘It was sheer luck that the ‘rogue bullet’ did not kill Aaron – or in fact, one of the officer’s colleagues or indeed an innocent bystander.

‘However, I am pleased to confirm that there certainly will be institutional accountability for what happened to Aaron, as I have brought the full force of the civil law to bear against West Mercia Police in the form of High Court proceedings, in which they have now admitted full liability for assault and battery.

‘Aaron will in due course receive a significant compensation award – though he would give it all up to change the trajectory of that bullet to a harmless one.’

A spokesperson for West Mercia Police said: ‘We can confirm that we have received a civil claim and that legal proceedings are currently ongoing with regard to the claim.

‘West Mercia Police have admitted liability for battery as part of these civil legal proceedings, which are ongoing.’