Tiger cub found by Mexican police in boot of SUV 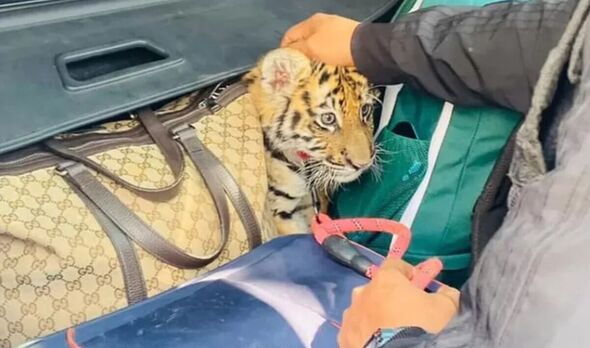 Mexican police conducting a routine traffic stop were surprised to be faced with a live tiger in the boot of the car they pulled over. Police had attempted to stop a luxury SUV for a traffic offence, but the drivers attempted to make off.

The authorities then blocked the vehicle in before undertaking a search.

Inside the car, four firearms were retrieved, as well as 98 rounds of ammunition. However, the story took an unusual twist when police found a live tiger cub in the boot.

The occupants of the SUV, named “Manuel N” and “Orfelina N”, were arrested at the scene.

Footage of the incident shows officers holding the remarkably tame animal (which sports a red lead) and trying to keep it calm.

The tiger’s care was eventually transferred to wildlife experts, with hopes that it could finally be returned to “its natural habitat”, according to The Telegraph.

The incident took place in the state of Queretaro, which is northwest of Mexico City.

It’s not the first time Mexican authorities have encountered exotic animals, as, although the trafficking of them is illegal, owning them is not.

However, any owner must be able to provide proof that the creature was sourced from a certified dealer.

Another tiger cub was also retrieved by US Customs and Border Protection at the Mexican border when it was discovered unconscious in a vehicle and was abandoned by the owners, who fled back into Mexico.

A dead spider monkey dressed as a drug gang mascot in a camouflaged hoodie with a fitted bulletproof vest was also retrieved from the scene of a shoot-out with gang members.

“An autopsy will be carried out on the animal by a veterinarian specialized in the species.”

Animal trafficking charges would also be considered against any surviving gang members.

A fully-grown Bengal tiger was seized after it escaped and was found roaming the city of Tlaquepaque in 2020.

While the animal’s owner (who had been pursuing it with a lasso) had the required documents, the authorities said they had broken safety rules.