'Too hot to sleep!': Britons lie awake after hottest day of the year

‘Too HOT to sleep!’: Britons lie awake all night due to sweltering 88.9F on warmest day 2021… and 84F will last all week (but watch out for those snap thunderstorms)

Britons are today waking up after a restless night of heat-ruined sleep ahead of what is expected to be another sweltering day in the UK’s long-awaited summer heatwave.

Overnight temperatures peaked at 68F in parts of the UK last night, leaving some Britons waking up on the wrong side of the bed this morning.

Earlier Britons had basked in the hottest day of the year, with temperatures soaring to a sweltering 88.9F at Heathrow Airport yesterday – the warmest of the year so far.

And the warm weather is set to continue this week, though snap thunderstorms could also be on the way, experts predict.

People this morning took to Twitter to share their sleep struggles – while others are on their way to bed after enjoying their first night out in 16 months on ‘Freedom Day’.

One Twitter user joked: ‘Too hot to sleep, too tired to get up. Welcome to Monday.’

Another, sharing a picture of a cat by a fan, said: ‘Too hot to sleep,’ while another wrote: ‘”Heatwave,” they said, “It’ll be nice,” they said. What they didn’t say was: “You won’t get any decent amount of sleep,” “You’ll feel constantly nauseous,” and “It’ll be too hot to do anything”. 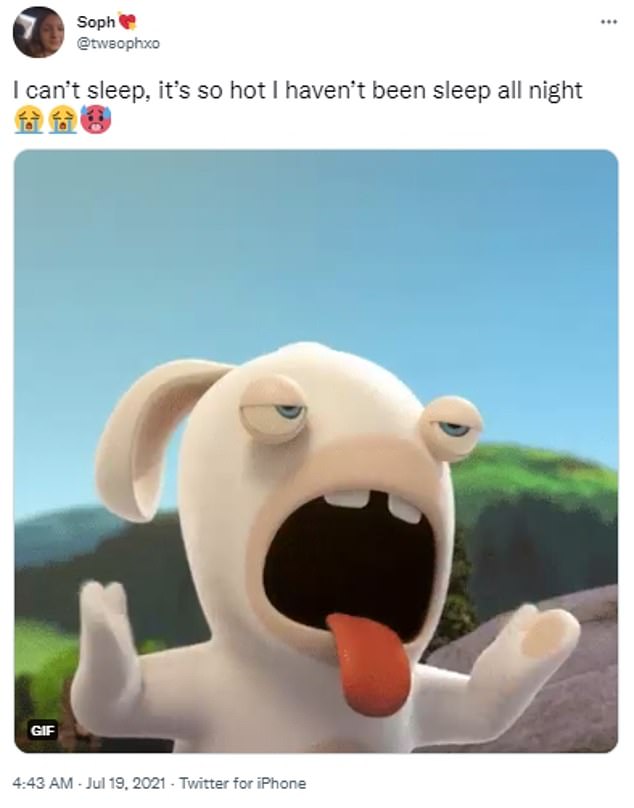 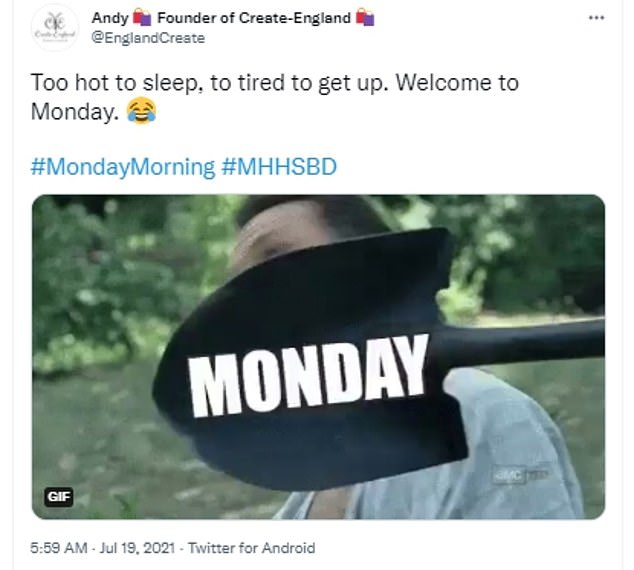 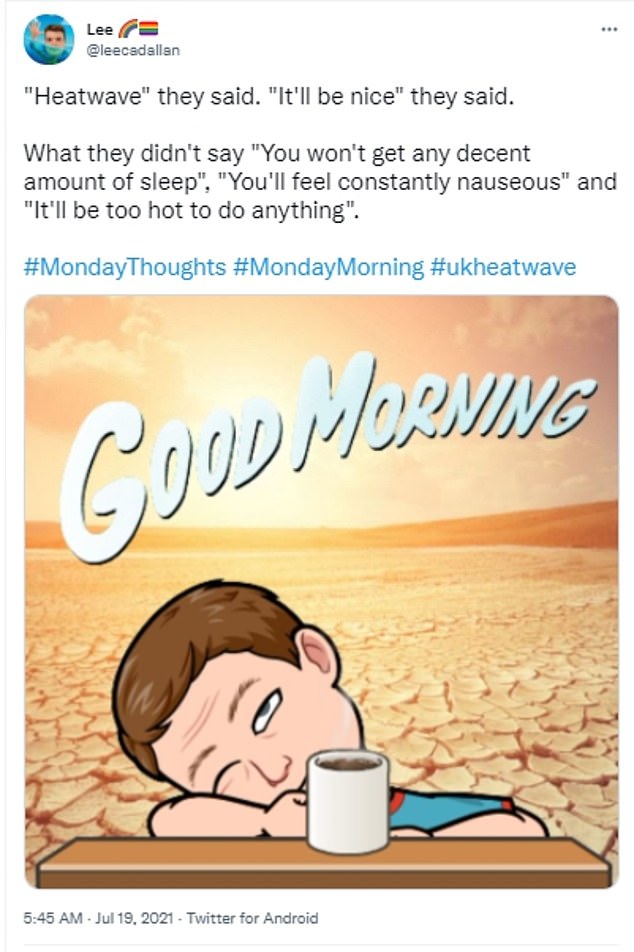 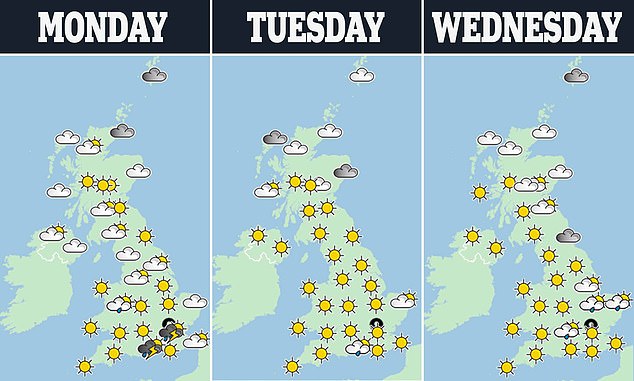 One Twitter user shared a meme of a cat by a fan, adding: ‘Too hot to sleep.’

Another added: ‘Anyone else feel like bacon in chip fat? Jeez it’s hot.. can’t sleep.’

It comes as temperatures are expected to reach 82.4F today in the warmest parts of the UK, including London and the south west. Most of the rest of the country is set for 80F temperatures throughout today.

However, while temperatures remain hot, rain could be on the way – bringing a bit of light relief from the sweltering heat.

According to the Met Office: ‘Today will be a mainly dry day with long periods of sunshine once any early cloud burns back to the coast.

‘Low chance of isolated heavy showers in the afternoon, mainly in the west. Very warm or hot inland, cooler near coasts.’

Tuesday may also come with more showers, though the warm weather is set to continue throughout the week, with potential thunderstorms on the way.

It comes as the UK yesterday recorded the hottest day of the year so far with temperatures exceeding 86F in both England and Wales.

Both England and Wales recorded the hottest day of the year on Sunday, beating records set on Saturday.

In England, 88.88F was recorded in Heathrow, overtaking Saturday’s record-breaking 86.54F recorded in Coton in the Elms, Derbyshire.

Tens of thousands of people headed for beaches with roads busy on coastal routes. 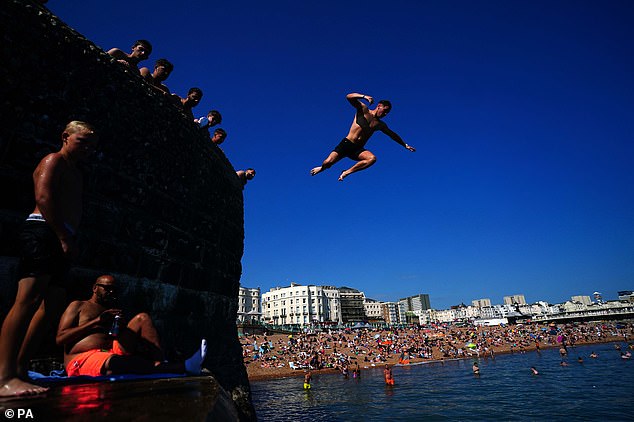 People jump into the sea at Brighton beach. The hottest day of the year so far was recorded in all four UK nations this weekend 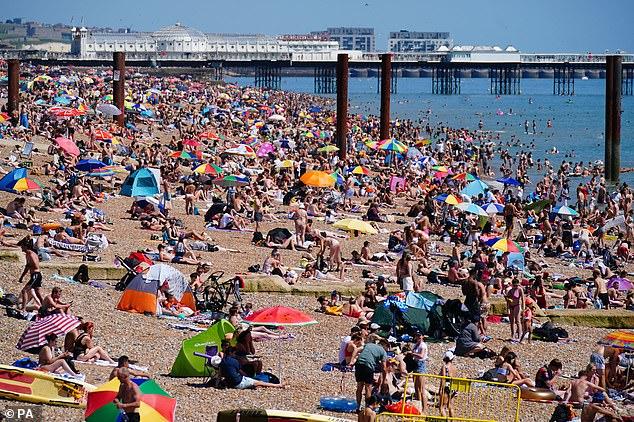 Saturday had marked the hottest day of the year for all four nations, and the hottest day since records began for Northern Ireland with 88.16F recorded in Ballywatticock, in Co Down, beating the previous highest temperature of 87.44F, which was reached on July 12 1983 and June 30 1976.

Becky Mitchell, a meteorologist at the Met Office, said: ‘We could get up to 89.6F next week, it is possible each day for different places in the country.

‘The most likely areas to get 89.6F are parts of the Midlands and down towards south-west England and potentially London – they are all going to see the highest temperatures in the coming days.’

The Met Office says a band of rain with showers and thunderstorms will approach the south west on Friday morning, before likely spreading erratically to the north east over next weekend.