Will the Red Wall hold firm? Tory mayor for West Mids Andy Street warns election is on a knife edge as he accuses Labour of dirty tricks – but insists Boris Johnson’s ‘wallpapergate’ is NOT hurting his campaign 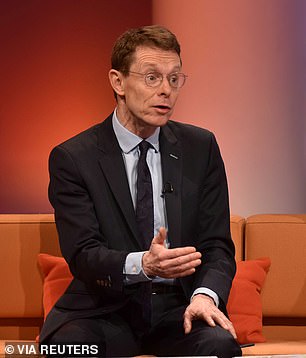 Mr Street said the battle for the key job will be the litmus test of whether the dramatic shift in the political landscape that delivered the PM’s majority is permanent.

In an interview with MailOnline, he voiced fears that Tories are assuming he will ‘win easily’ – when actually the contest is ‘very, very close’.

The former businessman criticised Labour opponent Liam Byrne for running attack ads in the campaign, saying he hoped they would merely underline that he is facing a ‘career politician’.

In an optimistic assessment, Mr Street – who was the boss at John Lewis before entering politics – also dismissed the idea that the row over the premier’s lavish flat refurbishment and lobbying revelations were having a significant impact with voters.

The West Midlands is a critical part of the bewildering array of democratic battles that will be decided next week – with Sir Keir Starmer desperate to show he has a serious chance of one day becoming prime minister.

As well as mayoralties in Tees Valley and London, some 5,000 councillors in England, the Hartlepool seat in the Commons, and Scottish and Welsh parliaments are up for grabs.

Mr Street’s hard-fought victory in 2017 was seen as an early indicator of the tide that smashed Labour in 2019, with a swathe of previously rock solid seats turning blue.

The 57-year-old won the mayoralty by fewer than 4,000 votes – a margin of less than one per cent – and allies stress that the result came at the high-water mark of Theresa May’s regime.

Mr Street stressed his record in securing clear wins for the region from the government, saying he felt voters now understood what the job could do.

‘Four years ago we spent a long time explaining to people what on earth the mayor;s job was about, why it was relevant. Most people now have understood that. The role has been established,’ he said.

Mr Street shrugged off the raging rows over David Cameron’s lobbying and the murky funding of the PM’s flat refurbishment. He has dodged getting involved in the spat over claims the overhaul was needed due to Theresa May’s ‘John Lewis nightmare’ decor – merely insisting that he had learned you ‘can’t please everybody’.

‘The honest truth, not a single person has mentioned this to me on the doorstep since this started. Whether it’s the Greensill element, any elements of it – not one person has raised it,’ Mr Street said.

He insisted that the word sleaze ‘has not come out of the mouth of any normal voter I have met’.

‘I get the impression they will vote on the issues here in the region. They don’t talk about things to do with national politics that much,’ Mr Street said.

Instead the Tory candidate said focus of voters seems to be on the vaccination drive, the end of lockdown, and the economic recovery.

He said he hoped over the past four years he had demonstrated the benefits of being able to influence the government – including a sevenfold increase in transport investment and the resurrection of derelict industrial sites such as Longbridge.

‘We have definitely done much much better (than in the past), and there are big things people can see that are government investments that are generating jobs right now,’ Mr Street said.

‘Obviously the mummy and daddy of all that is HS2.’

Mr Street played a pivotal role in getting the green light for the HS2 project – which is seen as a catastrophic waste of money in some Tory circles.

‘If people say to me, demonstrate you have influence over government – I do think it is the single best example,’ he said.

‘Most people would accept the Conservative Party were uncertain what way to jump. A lot of people were quite quiet, waiting to see what way the PM would jump.

‘I of course was in as very different position. I knew what I wanted, I knew it was critical to my region, I got out there and fought for it…

‘That is what a major should do.’ 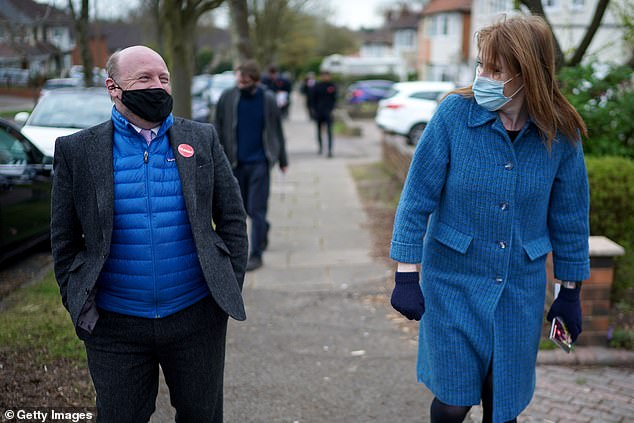 The former businessman criticised Labour opponent Liam Byrne for running attack ads in the campaign, saying he hoped they would merely underline that he is facing a ‘career politician’

Mr Street stressed that the West Midlands and other Red Wall battlegrounds could define the shape of politics for years to come.

‘They will be very, very close. But if we do stay just an inch ahead what that will tell us is the whole Red Wall stuff was not about a one-off issue of Brexit or anti-Corbyn feeling,’ he said.

‘It was something much, much more deep seated. I think what this is about is whether they see the Conservative councils, mayors, governments deliver for them.’

Mr Street insisted he had conducted a ‘completely positive campaign’. But pointing to the Jo Cox foundation pledge for a ‘respectful campaign that fosters democratic debate and upholds the dignity of all candidates’, he suggested his opponent had not been playing by the same rules.

‘I hope people would say I have tried to fight a completely positive campaign, always concentrating on what we are going to do,’ he said.

‘They’ve been running some, you would probably call them attack ads this week. I just think to myself, it is a shame that is necessary really.

‘My own view is that Labour’s tactics when they do that, they just sort of underline the career politician, the traditional partisan approach and I don’t think voters like to see it.’

Of 50-year-old Mr Byrne – MP for Hodge Hill and a minister under Tony Blair and Gordon Brown – he said: ‘If he continues to put attack ads out he perpetuates that image.’

In a final plea to voters with less than a week to go until polling day, Mr Street said: ‘Too many people here think I am going to win too easily, particularly Conservative voters.

‘This is not a done deal. This is very close. Labour have got an incredible bank of votes here, particularly in Birmingham.

‘We need our voters to be motivated, if they like the way I’ve gone about things… please come out and vote for it.’

andy, for, mayor, Mids, Tory, West
You may also like:

Alcohol-related deaths in England and Wales rise to highest EVER