Campaigners say about 1.6 million hospitality workers are being left out of pocket as up to two-thirds of employers in the sector take a share of customer gratuities.

It comes after we revealed last week that The River Cafe, a London haunt of supermodels Kate Moss and Gigi Hadid, does not share its optional 12.5 per cent service charge with waiters and waitresses – instead it guarantees them the higher rate London Living Wage.

Restaurant owners are banned from keeping cash tips left for waiting staff, but there is nothing to stop them taking a cut when the bill is settled by debit or credit card, which has become increasingly popular as cash use was discouraged in the pandemic.

In 2019, the Government announced plans to introduce an Allocation of Tips Bill to ‘promote fairness for workers by creating legal obligations on employers to pass on all tips to workers in full and, where they distribute tips among workers, to do so on a fair and transparent basis’.

But there has been no legislation. 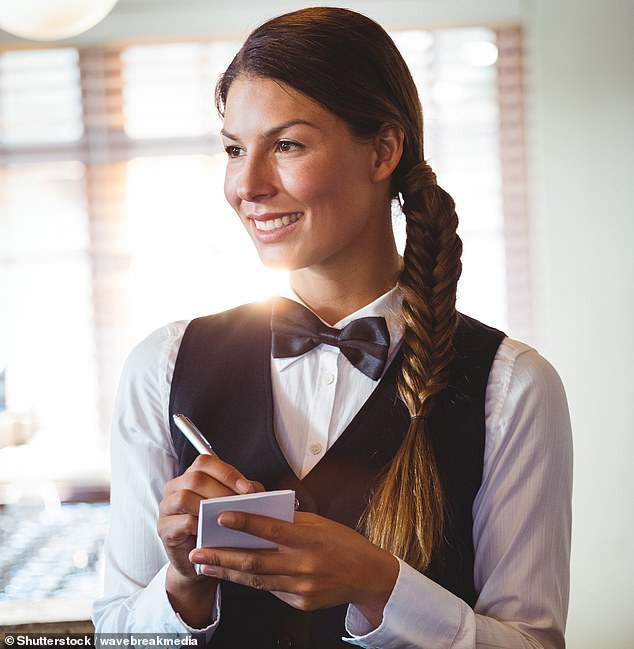 Campaigners say about 1.6 million hospitality workers are being left out of pocket as up to two-thirds of employers in the sector take a share of customer gratuities

Union chiefs at Unite have written to Business Secretary Kwasi Kwarteng warning that the fall in cash payments and employers ‘interfering’ with tips has created a ‘perfect storm’ that has wiped out recent rises in the Living Wage and Minimum Wage.

Unite national officer for hospitality Dave Turnbull said: ‘Waiting staff, the majority of whom are on the minimum wage, keep being promised jam tomorrow by the Government but in the meantime they continue to be let down by unscrupulous employers.

‘Not only must the Government finally bring forward fair tips legislation, but it must ensure that it is sufficiently robust to prevent it being undermined through loopholes.

‘Unless action is taken, there will continue to be a recruitment crisis in the sector.’

Pizza Express faced a backlash last month after it was revealed that the chain skimmed off waiters’ tips so it could pay more kitchen workers.

Unite said workers would lose an average of £2,000 a year. 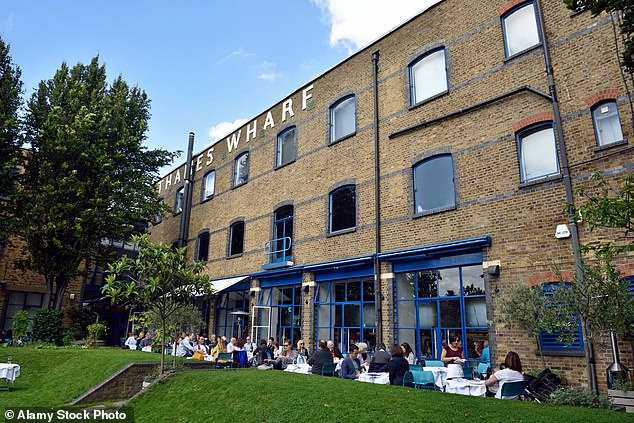 We revealed last week that The River Cafe, a London haunt of supermodels Kate Moss and Gigi Hadid, does not share its optional 12.5 per cent service charge with waiters and waitresses

A Pizza Express spokesman said the decision was made in February last year and added: ‘The UK went into lockdown in March 2020 and our restaurants closed before this could be implemented.

‘The committee decided instead to implement it from 17 May 2021, as restaurants reopened again.’

Responding to the River Cafe revelations, interior designer and socialite Nicky Haslam last night said: ‘I think very few restaurants can ever do fairness unless they put tips in one pot and share it out. I like to give tips to the actual waiter.’

By Tom Parker Bowles for the Mail on Sunday

I am a man in thrall to restaurants. They are my life, my love, and, as a critic, my living, too.

Because at best, they’re so much more than mere dining rooms – rather, places to celebrate, commiserate and come together, to ponder, observe, relish, feast and forget, just for a few hours, the travails of the world outside.

And great restaurants are never just about the food.

Atmosphere is essential, that vital hubbub and buzz that cannot be faked. Service, too, of course, and the sweet feeling of genuine hospitality.

It’s a feeling created by the first and last people you see, the ones who greet you, take you to your table, write down your order, deliver food from the kitchen, sweep the floor and clear up those empty plates.

They’re the people who have to laugh at your bad jokes and smile while that slightly creepy fella on table eight lets his gaze linger too long where it shouldn’t.

To hold their tongue when some drunken thug throws abuse to show off to his mortified date. To act diplomatic, when the know-all sends back his gazpacho. For not being hot.

Often underpaid, under-appreciated and overworked, they spend hours on their feet with barely a break, just so customers have a dinner to remember.

Too often in Britain, we see service as menial and basic, yet great hospitality is an art. You try working a double shift in a busy restaurant anywhere in the world and tell me these people are unskilled.

Which is why we’re happy to pay the additional (and optional) service charge. A little extra, to show our gratitude, a top-up of the generally meagre hourly minimum wage, in the assumption it will be passed directly on to staff.

Many restaurants do this. Always ask, and staff will be only too happy to let you know.

It’s also the most tax-efficient way of getting money to them, being passed on without incurring National Insurance or VAT.

As one industry expert points out: ‘Managed fairly and properly, it should be a win-win-win all round for the member of staff, the business and the consumer.’

Staff get more cash after tax; businesses avoid unnecessary costs and the punter pays less for his dinner. But it’s a complex subject and an imperfect system, open to abuse.

Many operators take the service charge for themselves and use it as a revenue stream (or, worse, pocket the cash).

Some restaurants, such as The River Cafe, take the service charge but use it to ensure employees are paid a higher basic wage.

The problem with this perfectly legitimate approach is it’s likely to be misunderstood by consumers.

Another service charge issue is the nature of its ebbs and flows. In boom months, all is rosy, and the tronc (a fund into which all tips are paid) is high. But come January and February, when trade is much lower, the tronc suffers.

As one industry insider asks: ‘Should a quieter period mean staff should get paid less?’ Certainly it seems unfair.

Some restaurateurs argue that it would be far better to do away with the service charge altogether, such as Bristol’s The Ethicurean, London’s Leroy and Manchester’s Mana. I’m convinced this is the ultimate way forward, with tips abolished and a proper salary paid.

But that’s easier said than done. Because if service charges are scrapped, menu prices would have to rise. ‘If your steak suddenly goes from £30 to £38, how do you explain that to the customer?’ asks one restaurateur.

The tips issue, as you can see, is murkier than Scotch broth.

But there is one thing on which everyone agrees – front-of-house staff should be paid a decent living wage.

For too long, some in the industry have exploited their workers. But now, thanks to the double whammy of Brexit and Covid, hospitality staff are in very short supply. They hold the upper hand.

There are many companies that lead the way in looking after their staff (Dishoom and Hawksmoor spring to mind). But the whole hospitality industry must learn to treasure their front-of-house workers, as should we customers.

Because good service comes from good people being paid good money. And being treated with respect by all.

DEMANDED, laws, New, put, to, Tough
You may also like: