‘I’m putting Princess Leia down for her because she was a strong woman in a world of men’: Odd moment Swedish tourist leaves Star Wars Lego toy at Buckingham Palace in rambling 3.18am tribute to Queen

This is the bizarre moment a Swedish tourist leaves a Star Wars Lego toy at Buckingham Palace in a rambling tribute to the Queen in the early hours of the morning.

The woman, being interviewed on BBC News on Friday morning at 3.18am, decides that the most appropriate tribute for the Queen is a Princess Leia Lego figure.

The Star Wars character was put down by the woman to symbolise the Queen’s strength and how she was a ‘strong woman in a world of men’.

BBC News presenter Kasia Madera, who was gathering tributes from late-night visitors to the palace, asked her: ‘From Sweden, as well – the British Royal Family, are they popular?’

In a confusing, yet touching response, the Swedish woman – without hesitation – replies: ‘I am putting Princess Leia down for her because she was a very strong woman in a world of men and she did not complain but she took her space.

‘And she made her path and I really admire her for that, and I think there’s something to aspire to. 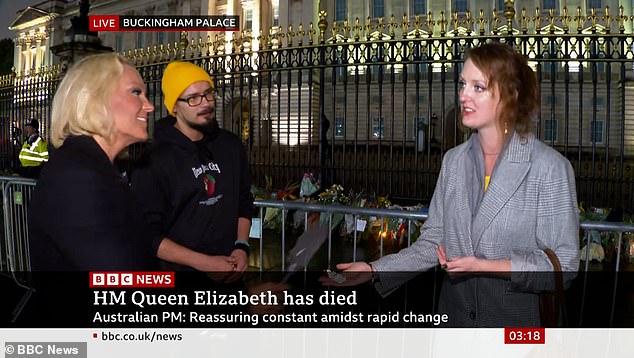 BBC presenter Kasia Madera was interviewing this Swedish tourist outside Buckingham Palace at 3.18am when she decided to lay down a Princess Leia Lego toy as a tribute to the Queen 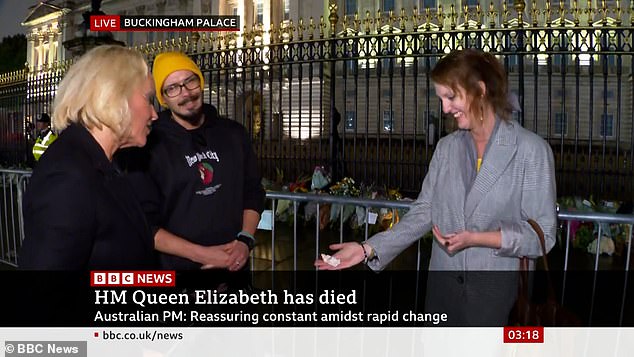 ‘I think she’s a role model for all of us so I’m going to put Princess Leia down to symbolise her strength and her and I just admire her for how she changed because the times that she ruled in 70 years, so much happened, especially for woman.’

She is filmed alongside a man wearing a yellow hat, who is not interviewed but is on hand to agree with his friend by occasionally saying ‘yeah’ and nodding during the rambling tribute.

It is not yet known where the pair had been at such early hours on Friday morning but people on social media speculated that she was likely to have been out and about in the capital.

One social media user said: ‘People need to go home after a night on the lash rather than pranking BBC presenters’.

Another joked: ‘Haha, what were they expecting at that time on a Friday night, really’.

A third added: ‘Spoken with such grace and sincerity too. Very funny.’

And a fourth said: ‘This would have been me in my 20s. Drunkenly paying tribute to somebody with a figurine of a fictional somebody ELSE.’

It’s not the first time Ms Madera has had a strange interview during this period of mourning. Just an hour earlier she had spoken to a passerby ‘on a work night out’ who decided to head to the Palace at 2am.

Viewers were left convinced one man she came across didn’t actually know the Queen had died despite being outside the royal residence, offering up a peculiar answer when asked what he was there for at such a late hour. 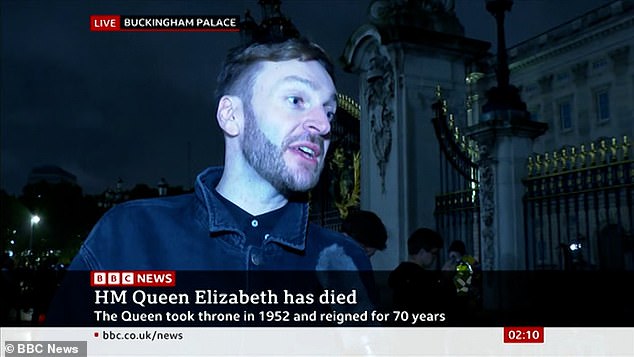 Viewers were left convinced one man she came across didn’t actually know the Queen had died despite being outside the royal residence, offering up a peculiar answer when asked what he was there for at such a late hour

‘Just explain why you’re here, it’s the middle of the night in London yet we’re still gathering here,’ Ms Madera asked the man.

He responded: ‘I actually came home after a work event and I turned on the TV and saw you [Ms Madera] – and I thought hold on a minute, something’s happening here. So I came down to see this, be a part of it.’

The presenter then says, ‘I’m sure I’m not the reason why you came here,’ and he quickly says, ‘Not literally you, I mean this event… and realising that people were here…’

The BBC presenter then asks, ‘So you wanted to be here as well,’ he says ‘Yeah I did. Five minute walk, and here we are…’ and an awkward silence ensues.

He adds, while gesturing towards people behind him: ‘All the diversity going on which is good and interesting, and, like, beautiful really. Isn’t it?’

She quickly ends the interview by thanking him and continuing with her segment elsewhere. 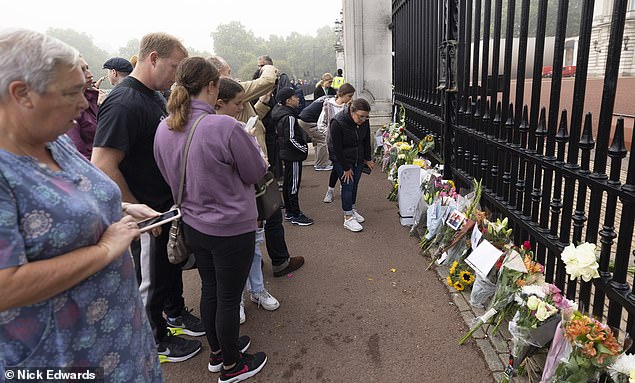 Tens of thousands of flowers, written tributes, balloons, cuddly toys, candles and cards have been left for Her Majesty in the days since her passing, with many people seen in tears at the sight of what’s before them

Mourners have once again gathered outside Buckingham Palace from the break of day this morning to lay flowers and pay their respects to the late Queen Elizabeth II.

After her doctor’s health concerns were shared to the public on 8 September, members of the public have headed towards the royal palace to send their well-wishes – and the numbers have only skyrocketed since the Queen’s death was announced at 6.30pm on Thursday.

Tens of thousands of flowers, written tributes, balloons, cuddly toys, candles and cards have been left for Her Majesty in the days since her passing, with many people seen in tears at the sight of what’s before them.

Today, well-wishers in Scotland are paying a fond farewell to the Queen today as her coffin left Balmoral to begin a six-hour journey to Edinburgh, where it will rest overnight at the Palace of Holyroodhouse before lying in state at St Giles’ Cathedral.

It will then begin its final leg to St George’s Chapel at Windsor Castle, where she will be buried alongside her beloved husband, Prince Philip, alongside her father, George VI, the Queen Mother, and her sister, Princess Margaret.