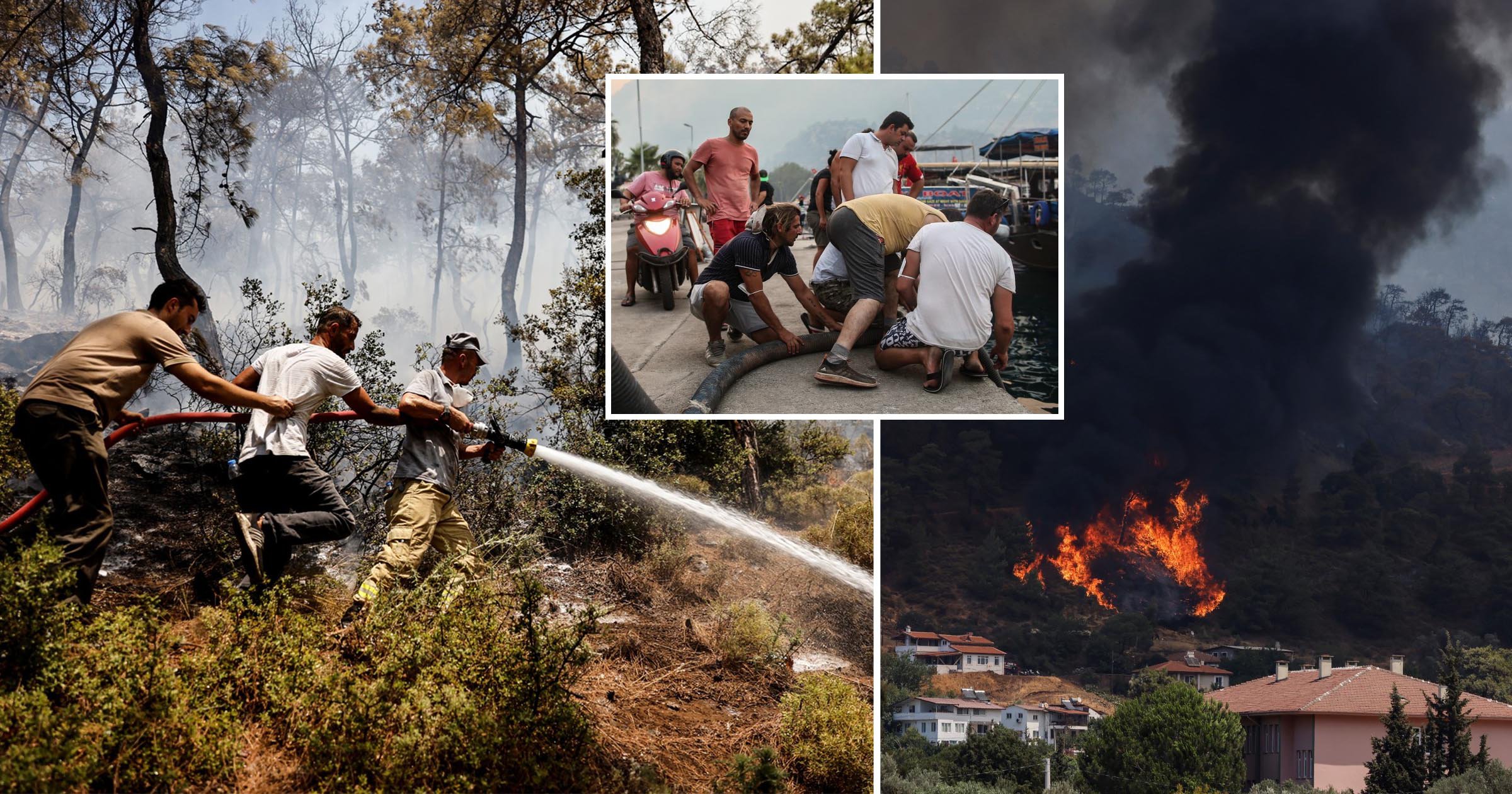 The death toll from the blazes, which began on Wednesday, rose to eight after the discovery of more bodies.

Fires were raging yesterday near holiday hotspots of Antalya and Mugla, with temperatures above 40°C and high winds worsening the situation.
People escaped in small boats, with the coastguard and two navy ships waiting out at sea in case they were needed for a bigger evacuation.

Police took to water cannons, usually used to control riots, to battle fires in the popular district of Bodrum.

Social media videos showed tourists in the area scampering down streets with their luggage to escape the nearby flames.

Panic-stricken holiday makers, including around 100 Russians, were evacuated from Bodrum hotels on Saturday as a fire rolled down the hill toward the seashore.

It is the latest weather event to concern scientists, amid a series of global extremes thought to have been made worse by the climate crisis. 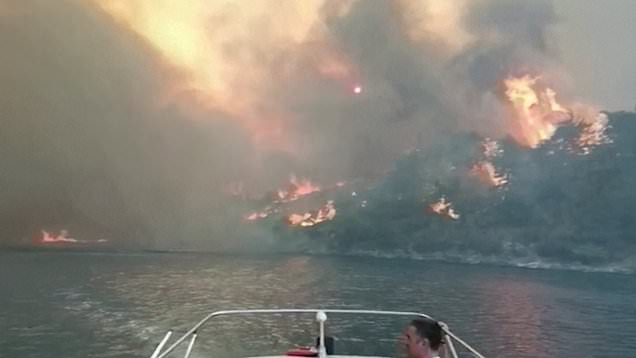 In the tourist resort of Marmaris, the authorities urged travellers and residents alike to keep evacuating the town of Turunc.

Residents of villages around Marmaris pleaded for more help on social media, as fires enveloped the local area in Mugla province and strong winds made firefighting efforts more difficult.

Some waited anxiously on the beach to see if fires would come down to the shore as others left carrying small suitcases.

A helicopter was enlisted to help extinguish the blazes, many of which were unreachable by land.

The most recent confirmed victims were a Turkish-German couple, whose bodies were found in their burned home in Manavgat, Antalya, according Turkish news agency DHA.

Fires were also encroaching on a village near the town and locals were evacuating in trucks.

Turkish television showed fires had reignited after being extinguished earlier.
Civilians were trying to protect homes and olive groves but many homes have already been badly damaged.

The health minister, Fahrettin Koca, said at least 27 people affected by the fires were still receiving treatment in hospitals while hundreds of others had been released.

The minister of forestry and agriculture, Bekir Pakdemirli, tweeted that 111 wildfires were ‘under control’ across Turkey.

He added that since Wednesday, wildfires had ignited in 33 provinces.

President Recep Tayyip Erdogan toured some of the affected areas on Saturday and promised to help residents rebuild their homes.

But he was heavily criticised him for arriving in Marmaris in a massive convoy that caused more traffic and for having bags of tea thrown from his bus to people gathered to hear him speak.

The Turkish authorities claim to be investigating whether the fires may have started as ‘sabotage’ by Kurdish militants, but experts have widely pointed to climate change and drastic increases in temperatures, along with accidents caused by people.

Mr Erdogan said on Saturday that one of the fires was started by children.

A heat wave across southern Europe, fed by hot air from North Africa, has led to wildfires across the Mediterranean, including on the Italian island of Sicily and in western Greece, where some residents had to be evacuated by boat to escape the flames.

On Sunday afternoon, bathers on an Italian beach south of the Adriatic city of Pescara fled when they spotted towering clouds of smoke and flames from a fire in a nearby pine forest, the Italian news agency LaPresse said.

Meanwhile, in Turkey’s eastern Van province, floods over the weekend destroyed at least six houses after a small river overflowed amid heavy rains.

Villagers were told to leave their homes and climb to higher locations.

It comes after recent weeks saw an unprecedented ‘heat dome’ hit Canada and record-breaking wildfires batter the US west coast.