Rail passengers facing another chaotic week of strike action are set to be hit with a record 12 per cent increase in fares, The Mail on Sunday can reveal. Strike action on nine networks held up tens of thousands of football fans, holidaymakers and festival-goers this weekend. Next week, commuters will be hit by strikes on Thursday and Saturday that will cripple the whole rail network. Meanwhile, campaigners have told The Mail on Sunday that annual season tickets will rise by as much as £1,000 next year unless Ministers end a decades-old method for calculating increases using an outdated measure of inflation.

The average rise each year is based on the previous July’s retail price index (RPI), which is due to be announced on Wednesday, and is expected to rise 0.1 percentage points to 11.9 per cent, according to research firm Capital Economics.

This means fares will be allowed to rise by 12 per cent – almost double the previous record increase in 2012. It will see commuters who travel in to London facing an average annual season ticket rise of £550, taking the amount they pay to £5,500. Season tickets for regional commuters would rise by an average £240 to take their fares above £2,000. 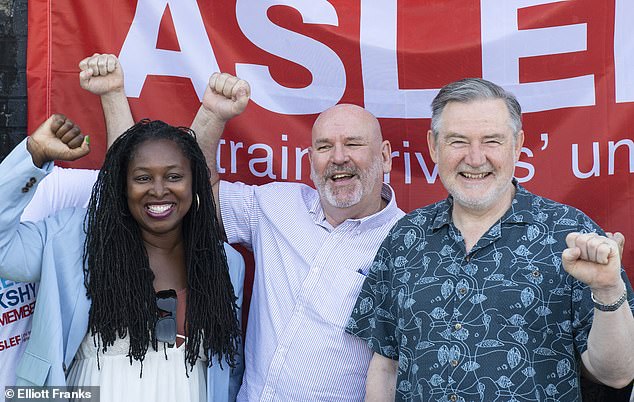 Paul Tuohy, from the Campaign for Better Transport, said: ‘Households that are already struggling could find the cost of getting the train to work increasing by many hundreds of pounds. Large numbers of commuters could be priced off trains altogether. We urgently need a fares freeze for 2023.’ He urged Ministers to base future rail ticket increases on the Consumer Prices Index (CPI), which is used to calculate rises to benefits and the state pension. CPI tends to be lower – for example, in June it was 2.4 percentage points below RPI. 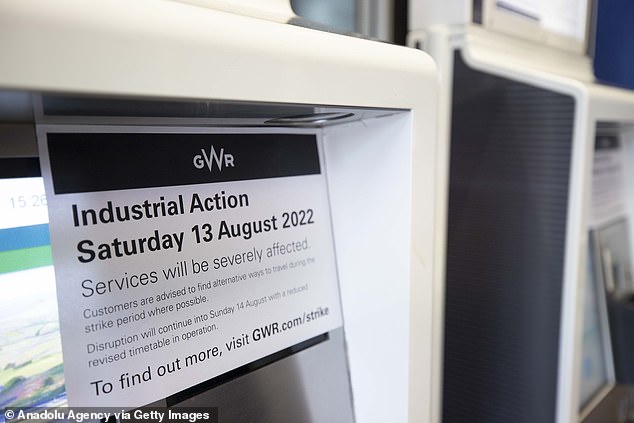 London Euston and Birmingham New Street were shut yesterday as members of the train drivers’ union Aslef held a strike amid protracted pay negotiations with rail companies and Ministers.

Aslef general secretary Mick Whelan, who was joined at a picket line outside Willesden Junction station in North-West London yesterday by Labour MPs Dawn Butler and Barry Gardiner, said: ‘We don’t want to go on strike – strikes are always a last resort – but the companies and the Government have forced our hand.’

When contacted by The Mail on Sunday last night, the Department for Transport said Ministers would meet this week to discuss cutting the link between the July figure for RPI and rail fare rises. They hope to make the percentage increase lower than July’s RPI. Referring to the rail strikes, a spokesman added: ‘We urge the unions and industry to agree a deal that is fair for rail staff, passengers and taxpayers.’