Trauma may affect people differently, a judge has warned a jury who have retired to assess the evidence of a woman who claims she was raped by footballers Jack de Belin and Callan Sinclair.

NSW District Court judge Nicole Noman told the jury that if the woman did not act in a way they would expect a person to behave after being sexually assaulted, then that did not necessarily mean she was unreliable. 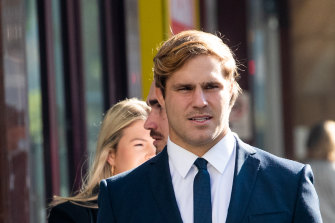 “People may not remember all the details of an allegation, or may not describe an allegation of a sexual offense in the same way each time,” Judge Noman said in providing legal directions at the end of the two-and-a-half week retrial of the pair at the Downing Centre in Sydney.

“Trauma may affect people differently, including affecting how they recall events. Guided by these observations, it is incumbent that you decide whether or not any difference in the complainant’s account is important in assessing her truthfulness and reliability.”

Judge Noman’s directions came after the summing up of both parties in the case, during which Mr de Belin’s barrister David Campbell SC said the woman was seen on CCTV footage “laughing her head off” and “enjoying herself” as she walked with the pair after the alleged incident.

Mr de Belin, an NRL player with St George Illawarra, and Mr Sinclair, of the Shellharbour Sharks, have pleaded not guilty to five counts each of aggravated sexual assault for the alleged attack on the woman, then aged 19, at a North Wollongong unit in the early hours of December 9, 2018. 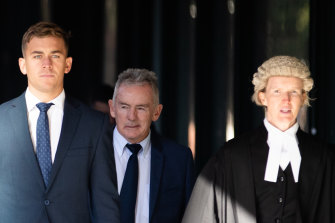 Callan Sinclair (left) at the Downing Centre during the criminal trial.Credit:Edwina Pickles

The pair met her several hours earlier at the Mr Crown nightclub in Wollongong during a Santa-themed pub crawl.

Judge Noman urged the jury to review the CCTV to determine for themselves the conduct of the woman at any particular moment: “It is for you, and not witnesses to determine what can be seen on the images.”

She also emphasised the woman was the only witness during the trial to give evidence relevant to the acts alleged in the charges against the pair.

“The complainant said it happened when she was alone with both accused. Both accused challenged that any sexual act was not consensual,” she said.

“You should carefully consider the complainant’s evidence because, unless you are satisfied beyond reasonable doubt that the complainant is both an honest and accurate witness, you cannot find the accused guilty.”

Crown prosecutor David Scully in his closing arguments on Thursday said Mr de Belin “hoped” and “expected” sex with the woman would occur, and “when the complainant didn’t want it, he didn’t take no for an answer”.

The jury has begun deliberating to consider its verdict.

Affect, Diff, May, people, trauma
You may also like: