Treehouse felled as councils wield the axe on guerilla playgrounds

Melbourne is deep into its sixth lockdown and with organised activities banned, children have been making their own fun in our parks.

Yes, there are the usual playgrounds, but guerilla play spaces are springing up on seldom-trod side tracks and in hidden corners. 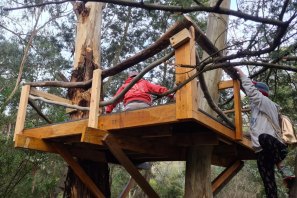 On Tuesday Moreland Council removed this parent-built treehouse in a Coburg North park.

Without council permission, parents and children are building everything from bicycle jumps to cubbies made from fallen branches.

But while residents and play advocates rave about them, councils and a child safety body say they can be dangerous.

On Tuesday, Moreland City Council removed a 2.5-metre bush treehouse that parents had constructed beside Edgars Creek in Coburg North.

Acting mayor Mark Riley said that while “we love kids creating their own play”, council inspectors had deemed the structure a safety risk.

“We would hate to see kids injured,” Cr Riley said.

Unapproved structures could also damage the “precious environment” along the creek, including wildlife habitat, he added.

Other councils have taken similar action. In September last year City of Port Phillip contractors removed a 30-year-old treehouse in a St Kilda street that was deemed unsafe. In July 2019 Macedon Ranges Shire removed a cubby house children had built on council land beside a Gisborne creek.

Marcus Veerman, chief executive of the social enterprise nudelkart.com and a specialist in helping communities build their own playgrounds, said Moreland Council was too hasty in removing the Coburg North treehouse.

“Just to pull it down without any warning or consultation, I think, is a bit of a shame because it sounds like it was a loved asset in the community and possibly could have been made safe,” he said. 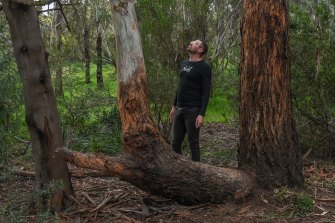 Global play specialist Marcus Veerman at the site of the Coburg North treehouse after its removal.Credit:Joe Armao

Mr Veerman said council playgrounds often reduced risk to a point where they were unattractive to children, who seek other activities. Not taking risks could harm children’s abilities to deal with challenges.

He said Moreland Council had worked with locals in the past. Last year, after children built a small bicycle jump in Jones Park, Brunswick East, the council accepted it on the condition that jumps were less than a metre high and confined to a set area.

“It is possible to work with community members to create safe and exciting spaces,” he said. “They don’t have to be automatically shut down.”

Barb Champion, executive director of Play Australia, said the demise of the Coburg North treehouse was “very sad for the kids”.

“It is offensive that council ignores the ingenuity of their own residents,” she said. “Public open space is for everyone and therefore should be for the benefit of the community, which includes kids.

“It’s interesting that there is no evidence of injury in ‘risky’ play environments. The reason is that kids learn to manage themselves, which is why Play Australia strongly supports play environments like this one.”

He said parents including tradesmen had taken care on the build, using quality materials.

David said the council stuck to the rules but was “taking away a bit of fun for the kids. Why do kids have to be in a designated area in a park? Can’t they experience the good old outdoors in the bush?”

Coburg North resident James*, 36, father of Billy*, seven, said he was “really sad and disappointed” at the treehouse removal. “There was a sense of adventure play as opposed to prescribed play.”

But Jason Chambers, general manager of Kidsafe Victoria, said councils had a duty of care to ensure public parks were safe. He said councils should pre-approve the installation of structures to guard against hazards such as lack of guard or handrails, lack of soft flooring and excessive height.

*Not their real names.

as, Councils, felled, Treehouse, W
You may also like: