A truck driver who was under the influence of drugs and sleep deprived when he drove into four police officers has been sentenced to 22 years in prison.

The traffic officers – three policemen and a policewoman – had pulled over a speeding car when Mohinder Singh ploughed into them.

His truck veered into an emergency stopping lane of Melbourne’s Eastern Freeway, where the four were standing after stopping a Porsche on 22 April last year.

It was the largest loss of police lives in a single event in Victoria.

Sentencing the 48-year-old, Justice Paul Coghlan told the court on Wednesday that Singh must serve at least 18-and-a-half years before he can apply for parole.

He described footage of the crash scene as “chilling”.

“The grief of those close to the victims is profound and life-changing,” he said.

“Such grief is heightened by the sudden and unnecessary nature of the deaths.” 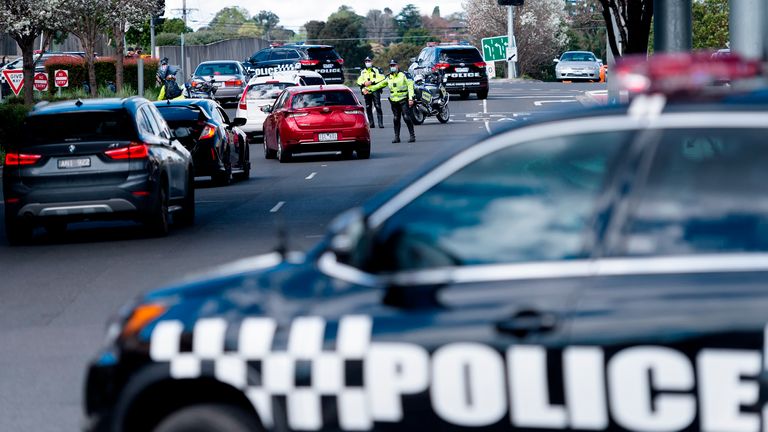 Singh had taken methamphetamine and other drugs before the crash and witnesses said he had not slept in days.

Andrew Prestney, father of Joshua Prestney, one of the officers, said that even though justice had been served “no amount of punishment can replace the loss of our loved ones and the missing place at our tables that will be felt by us for the rest of our lives”.

“We are consoled by the fact that our four will not be forgotten as we continue to carry them in our hearts,” he told reporters.

The driver of the speeding Porsche the officers had stopped, Richard Pusey, will be sentenced at Victoria County Court on 28 April after pleading guilty to several charges.

Pusey used his phone to video the officers as they died and was described by his sentencing judge, Trevor Wraight, last month as “probably the most hated man in Australia”.

The truck missed hitting Pusey because at the time he was urinating at the side of the road. But the truck destroyed his car and a police car.

Witnesses at the scene urged Pusey to help, but he shrugged them off, saying: “They’re dead.”

Pusey also admitted possessing ecstasy, after returning positive tests for the drug and marijuana at the time he was pulled over.

He faces a potential maximum prison sentence of five years.