Washington: Donald Trump attempted to corrupt his own Justice Department by pushing top law enforcement officials to cast doubt on the 2020 election and give battleground states a false pretence to prevent Joe Biden’s victory, a Congressional hearing has been told.

In its fifth public hearing into the violent attack by Trump supporters on the US Capitol, the January 6 investigating committee also revealed that multiple Republican members of Congress requested pardons in the days after the riot. This included far-right congressman Matt Gaetz, Alabama representative Mo Brooks, and Pennsylvania conservative Scott Perry. 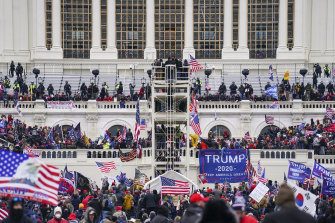 Supporters of then president Donald Trump invade Donald Trump the Capitol in Washington to pressure Congress to overturn the election result in his favour.Credit:AP

The hearing zeroed in on the pressure Trump applied to then acting attorney-general Jeffrey Rosen, which included a threat to replace him with a department underling when Rosen wouldn’t do the then-president’s bidding.

Rosen headed the department at the time of last year’s riot, after Trump’s attorney-general Bill Barr resigned in December, having told the then-president that he believed his claims of election fraud were “bullshit”.

As one of the day’s key witnesses, Rosen detailed Trump’s “persistent” attempt to stay in power, partly through an elaborate plot to use fake electors who could create phoney voting certificates for him in crucial states where Biden had legitimately won.

In one phone conversation, according to handwritten notes taken by Rosen’s deputy, Richard Donoghue, who also testified, Trump directed the Justice Department to “just say the election was corrupt and leave the rest to me and the R (Republican) congressman.” 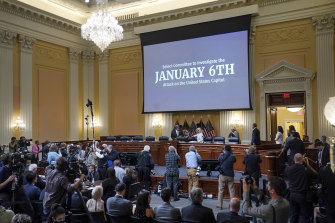 Committee members enter the hearing room as the House select committee investigating the January 6 attack on the US Capitol continues to reveal its findings of a year-long investigation on Friday.Credit:AP

In another phone call on Christmas Eve, Trump told Rosen the department needed to lift its game by doing more to investigate what he insisted was widespread electoral fraud.

“I had told him that our reviews had not shown that to be the case,” Rosen said he told Trump, consistent with the advice given by countless others after the election.

Much of the hearing centred on a little-known and inexperienced department lawyer called Jeffrey Clark who had taken an active role in pushing Trump’s election fraud lie – and who Trump, in turn, had wanted to install as head of the department.

Part of this role involved Clark drafting a letter to members of the Georgia state legislature claiming there were irregularities in the vote and suggesting that state politicians convene to select their own slate of electors to hand Trump a win. 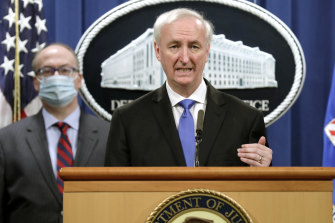 Jeffrey Rosen was US acting attorney-general.Credit:AP

“We have identified significant concerns that may have impacted the outcome of the election in multiple states, including the State of Georgia,” the draft letter said without offering evidence.

Rosen and Donoghue had refused to sign the letter, while top White House lawyer Eric Herschmann told the committee in a recorded deposition the plan would be tantamount to “committing a felony”.

Donoghue testified that he warned Clark that what he was doing would have “grave consequences for the country” and could lead to a “constitutional crisis.”

“I wanted to make sure that he understood the gravity of the situation because he didn’t seem to really appreciate it,” he said.

Nonetheless, Clark persisted, backed by Trump allies such as Rudy Giuliani. Giuliani previously told the committee in recorded evidence that he wanted an official in charge of the department “who isn’t frightened of what’s going to be done to their reputation”.

The pressure campaign on the department came to a head at a heated meeting at the White House on January 3 – three days before the Capitol insurrection – when Trump met with Rosen, Donoghue and Steven Engel, another senior department official who was working as a lawyer in the Office of Legal Counsel.

By that stage, Trump had already offered Clark the role of acting attorney-general. According to Rosen’s testimony, the president opened that meeting by saying: “One thing we know is you, Rosen, aren’t going to do anything. You don’t even agree with the claims of the election fraud and this other guy might actually do something.”

Rosen said he told Trump: “Mr President, you’re right. I’m not going to allow the Justice Department to do anything to try to overturn the election, that’s true, but the reason for that is because that’s what’s consistent with the facts and the law.

“That’s what’s required under the Constitution. So that’s the right answer and a good thing for the country, and therefore, it’s the right thing for you, Mr President.”

Trump ended up backing down on his attempt to install Clark after Rosen, Donoghue, and Engel, threatened to resign and warned that many of the department’s lawyers would also quit en masse, sending shockwaves through the bureaucracy and sparking yet another political crisis.

“I said: Mr President, within 48 to 72 hours there’s going to be hundreds of resignations to the leadership of your Justice Department, because of your actions,” Donoghue testified. “What is that going to say about you?”

Engel, who is an important figure due to his longstanding loyalty to Trump, also issued a similar warning, telling the leader: “I can’t be a part of this”.

He also warned Trump about the optics, telling him in that meeting: “The story is not going to be that the Department of Justice has found massive corruption that would have changed the election. It’s going to be the disaster of Jeff Clark.”

Clark pleaded the Fifth Amendment more than 125 times when the committee tried to question him about his role in the attempt to subvert the election.

However, in a sign that federal investigators may be starting to close in on people within Trump’s orbit, the FBI raided Clark’s home in Virginia on Wednesday in connection with a Justice Department inquiry – separate to the January 6 probe – into the effort to overturn the election.

Among the observers in the room for this hearing was Hollywood actor Sean Penn, who sat with current and former police officers to watch proceedings. 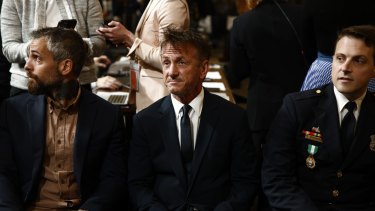 There are two more expected public hearings into the attack, which left several people dead, about 150 police officers injured and a nation divided.

They were due to wrap up by the end of this month however the committee announced this week that it would stretch its schedule into July following a trove of fresh evidence.

Among it is potentially explosive footage from documentary-maker Alex Holder, who had full access to Trump and his family before and after the insurgency. There are also new documents from the National Archives and a flood of new tips that have come in during the first round of hearings.

This may result in additional public hearings followed by a final report in September, two months before the crucial midterm elections.