‘If our soccer team wasn’t woke, they would have won gold’: Trump tears into the ‘Leftist Maniacs’ in the US Women’s National Team who finished with bronze and the ‘woman with the purple hair who played terribly’ 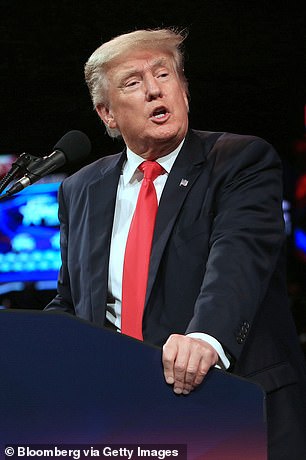 Donald Trump criticized the ‘Leftist Maniacs’ in the U.S. women’s soccer team and said they would have won gold at the Tokyo Olympics if they weren’t so ‘woke’ in a statement on Thursday morning

Donald Trump criticized the ‘Leftist Maniacs’ in the U.S. women’s soccer team and said they would have won gold at the Tokyo Olympics if they weren’t so ‘woke’ in a statement on Thursday morning.

The former president also called team captain Megan Rapinoe the ‘woman with the purple hair’ and said she played ‘terribly’ after they finished with the bronze medal following a victory over Australia.

‘If our soccer team, headed by a radical group of Leftist Maniacs, wasn’t woke, they would have won the Gold Medal instead of the Bronze,’ Trump said in the statement released through his Save America 45 PAC.

‘Woke means you lose, everything that is woke goes bad, and our soccer team certainly has.

‘There were, however, a few Patriots standing. Unfortunately, they need more than that respecting our Country and National Anthem. They should replace the wokesters with Patriots and start winning again.

‘The woman with the purple hair played terribly and spends too much time thinking about Radical Left politics and not doing her job!’

Rapinoe netted a goal directly from a corner to hand her side the opening lead in their entertaining 4-3 Olympics bronze medal victory against Australia.

Rapinoe scored just eight minutes into the contest when she opted to go for goal rather than try and pick out a teammate in the box from the corner.

The 36-year-old bent a ball into the box and it was all too much for Teagan Micah in the Australia goal, who made a last-ditch attempt to claw the ball away.

Trump and his aides have been quick to criticize Rapinoe’s side after many suggested they underachieved during this summer’s games.

‘The US Women’s Soccer Team went WOKE and now they lost to Canada,’ best-selling author and self-described security expert Brigitte Gabriel tweeted. ‘That’s what happens when you put political propaganda before sport and hard work.’

It’s not the first time the Trump camp clashed with the soccer superstar. 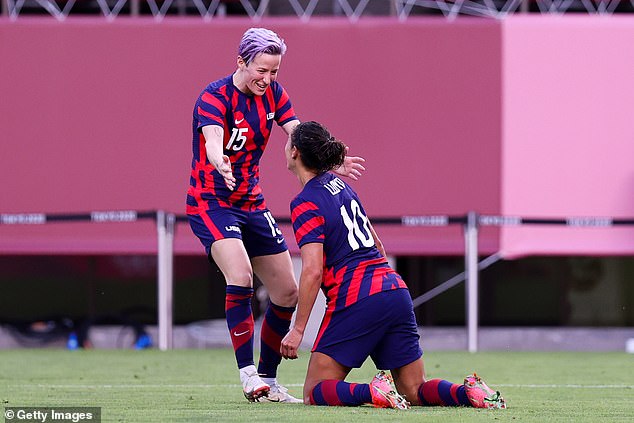 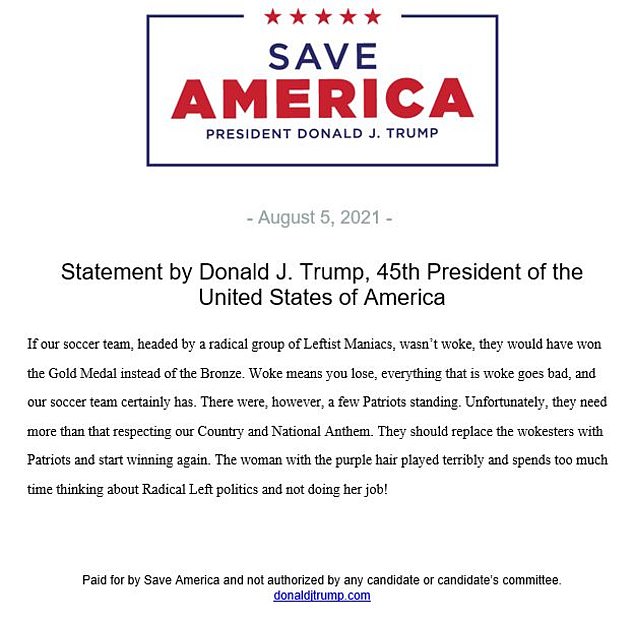 ‘If our soccer team, headed by a radical group of Leftist Maniacs, wasn’t woke, they would have won the Gold Medal instead of the Bronze,’ Trump said in the statement released through his Save America 45 PAC. ‘Woke means you lose, everything that is woke goes bad, and our soccer team certainly has’

The ex-president was asked by The Hill about whether Rapinoe’s refusal to take part in the National Anthem was appropriate in late June the same day the US team beat Spain to advance to the quarterfinals.

In the same interview he avoided weighing in on the US Women’s National Team’s fight for equal pay, which even his then-adviser Kellyanne Conway indirectly seemed to support.

‘I think a lot of it always has to do with the economics,’ Trump said, holding up Portugal’s Cristiano Ronaldo as an example and said his pay is high because he can ‘draw hundreds of thousands of people.’ 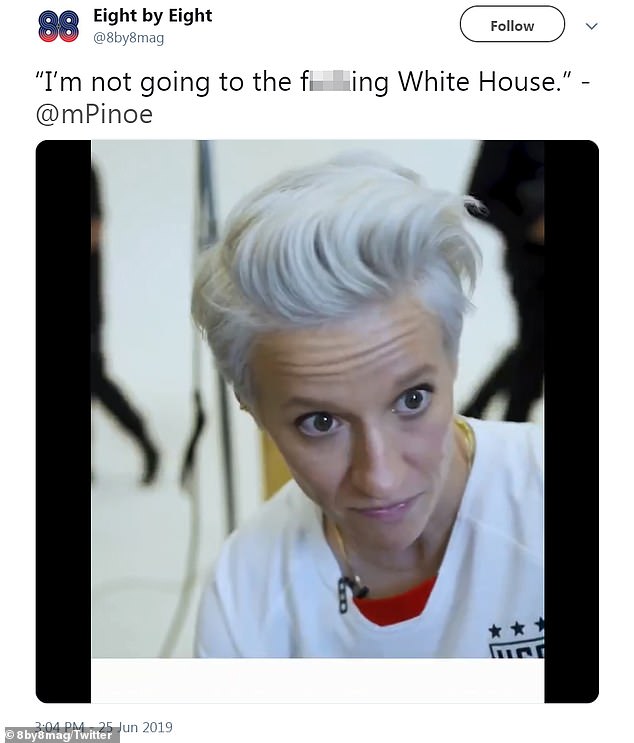 Rapinoe, who is a lesbian, is one of the most outspoken athletes representing America and has described herself as a ‘walking protest’ to Trump’s policies

Rapinoe and Trump clashed again a day later, when Rapinoe said ‘I’m not going to the f—— White House,’ adding ‘We’re not gonna be invited.’

She was asked the question by Eight by Eight on June 25, weeks before her team took the World Cup title in a final against the Netherlands, but said back in May of the same year that she would decline a potential invitation.

Trump lashed out at Rapinoe on Twitter the day after – tagging the wrong account in the process.

‘Megan should WIN first before she TALKS!’ the ex-president raged before the game, adding that the team wasn’t invited yet but ‘I am not inviting the TEAM, win or lose.’

‘Megan should never disrespect our Country, the White House, or our Flag, especially since so much has been done for her & the team.’ 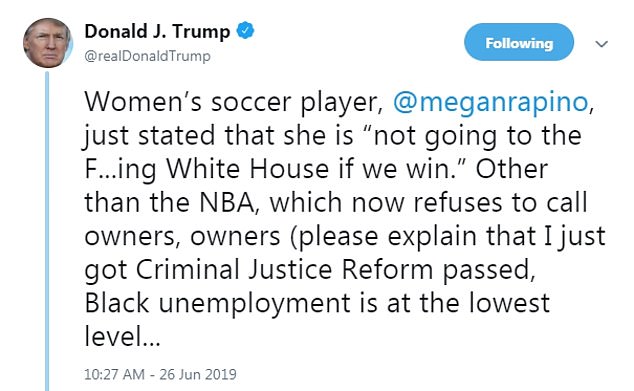 In a tweet initially directed at the wrong Megan Rapinoe, President Donald Trump responded to the U.S. national women’s soccer team captain’s recent assertion that she is ‘not going to the f***ing White House’ if the team wins the ongoing World Cup in France 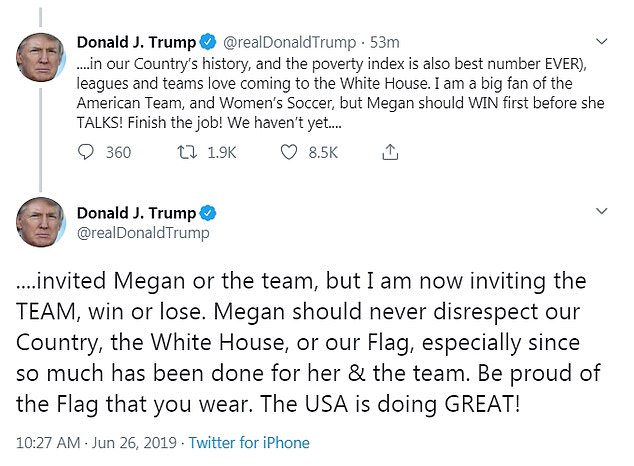 Although Trump’s initial tweet was deleted, he did continue along that thread, taking credit for improving the economy voicing his support for the U.S. team. He even wrote that he would invite U.S women’s national team to the White House, win or lose, but that Rapinoe ‘should WIN first before she TALKS!’

It was confirmed later by Sports Illustrated that the team did receive a private invite to visit both the White House and Capitol Hill, but declined.

‘Rapinoe says she heard about the outreach on the plane ride home from France, from USSF president Carlos Cordeiro. He suggested a visit to both the White House and Capitol Hill; Rapinoe and another player reiterated they didn’t want to meet with Trump. Rapinoe would like to visit Congress with her team, but she doesn’t think U.S. Soccer is willing to organize a trip that skips the White House, with the World Cup coming to the U.S. in 2026. The team rep says ’26 “has absolutely zero bearing” on the issue,’ a US soccer spox told the outlet.

Despite their recent successes, Rapinoe and the rest of the reigning World Cup champions have drawn the ire of conservative Americans over their activism. 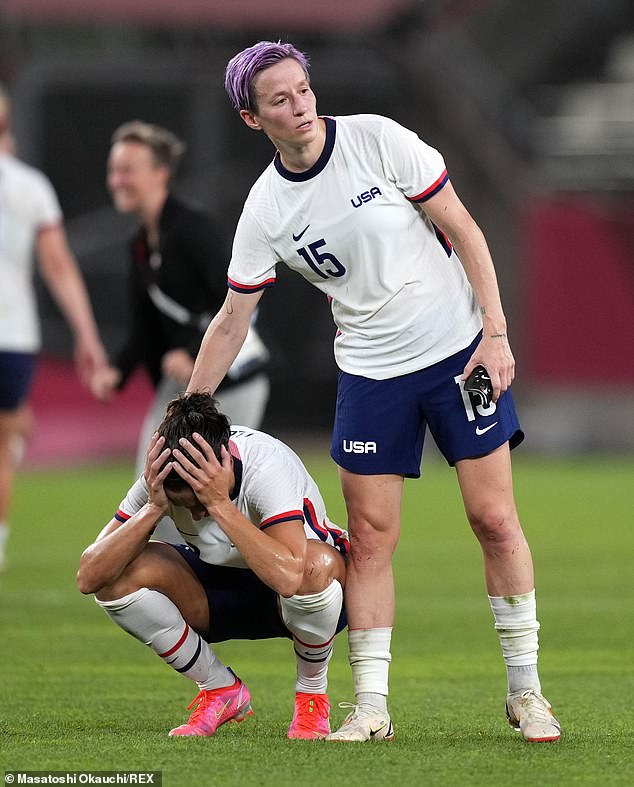 In addition to protesting racism by kneeling during the national anthem, Rapinoe and many of her teammates have pushed for equal pay with their male counterparts, publicly quarreled with former President Donald Trump, and preemptively refused to visit the Trump White House to celebrate their 2019 World Cup win.

Trump continued the feud during a speech in late July, telling an audience ‘Wokeism makes you lose.’

Weeks earlier, conservatives accused the team of turning away from a World War II veteran who was playing The Star-Spangled Banner on his harmonica before an exhibition. However, video footage shows that some players turned towards the flag while other remained facing forward in his direction.

The US can still take a bronze medal with a win over Australia, but the fact that Americans are going home without the gold was more than enough ammunition for critics.