Twitter dissolves Trust and Safety Council: Tech giant was due to meet with representatives of the 100-strong advisory board but instead sent an email that it would be disbanded in latest Elon Musk shake up

Elon Musk’s Twitter has dissolved its Trust and Safety Council, the advisory group of around 100 independent civil, human rights and other organisations.

The company formed the council in 2016 to address hate speech, child exploitation, suicide, self-harm and other problems on the platform.

The council had been scheduled to meet with Twitter representatives on Monday night, but Twitter informed the group via email that it was disbanding it shortly before the meeting was to take place, according to multiple of its members.

News of the councils dissolution came after Yoel Roth, the company’s former head of trust and safety – who was forced to flee his home on account of threats recieved after Musk shared his thesis. Roth has come under fire after the release of the so-called ‘Twitter Files’ – a series of revelations about the platform’s moderation. 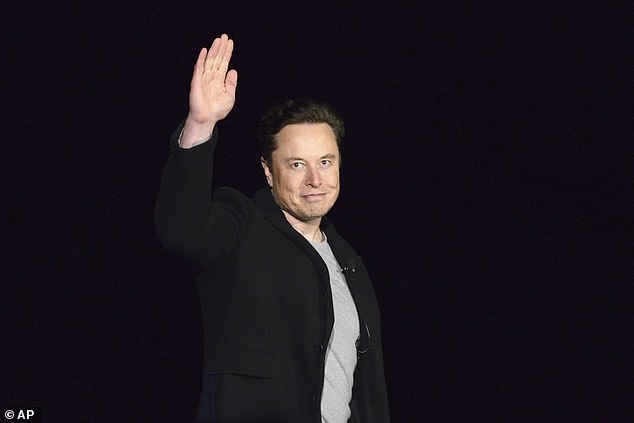 Elon Musk’s Twitter has dissolved its Trust and Safety Council, the advisory group of around 100 independent civil, human rights and other organisations. Pictured: Elon Musk waves to a crowd in February 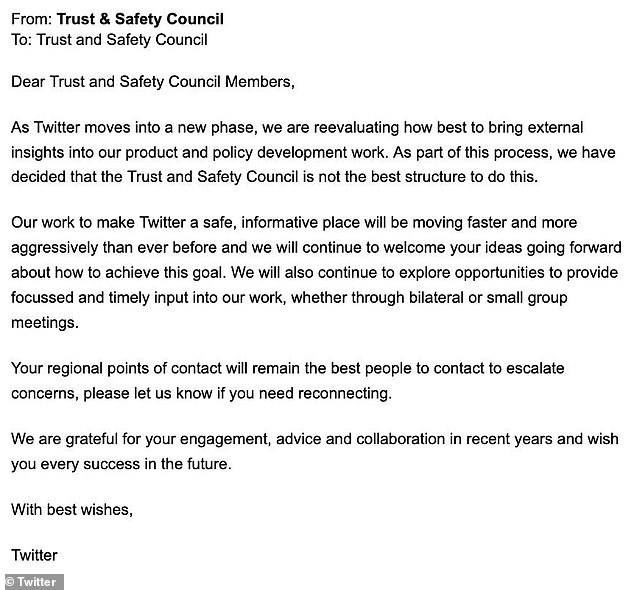 The council had been scheduled to meet with Twitter representatives on Monday night, but Twitter informed the group via email (pictured) that it was disbanding it shortly before the meeting was to take place, according to multiple of its members

The council members, who provided images of the email from Twitter to The Associated Press, spoke on the condition of anonymity due to fears of retaliation. The email said Twitter was ‘reevaluating how best to bring external insights’ and the council is ‘not the best structure to do this.’

‘As Twitter moves into a new phase, we are reevaluating how best to bring external insights into our product and policy development work. As part of this process, we have decided that the Trust and Safety Council is not the best structure to do this,’ the email to members of the council said.

‘Our work to make Twitter a safe, informative place will be moving faster and more aggressively than ever before and we will continue to welcome your ideas going forward about how to achieve this goal,’ said the email, which was signed ‘Twitter.’

The council comprised of various civil rights organizations, academics and other bodies that advocated for safety and advised Twitter as it developed products, programs, and rules, according to a web archive for the page.

The volunteer group provided expertise and guidance on how Twitter could better combat hate, harassment and other harms but didn’t have any decision-making authority and didn’t review specific content disputes.

A Twitter page for the group has been deleted.

About half of the social media site’s workforce – around 3,700 employees – have been laid off since Elon Musk took charge of the company in October and introduced a cost-cutting drive. More than a 1,000 have resigned, among them Roth. 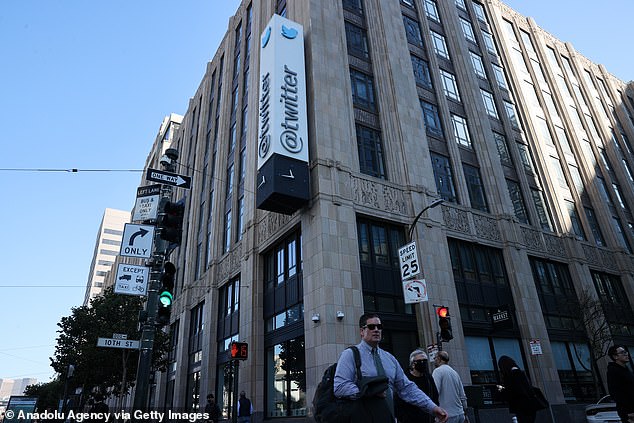 About half of the social media site’s workforce – around 3,700 employees – have been laid off since Elon Musk took charge of the company in October and introduced a cost-cutting drive. Pictured: Twitter’s headquarters in San Francisco, seen on November 18

Shortly after buying Twitter for $44 billion, Musk said he would form a new ‘content moderation council’ to help make major decisions but later changed his mind.

‘Twitter’s Trust and Safety Council was a group of volunteers who over many years gave up their time when consulted by Twitter staff to offer advice on a wide range of online harms and safety issues,’ tweeted council member Alex Holmes.

‘At no point was it a governing body or decision making.’

Twitter, which is based in San Francisco, had confirmed the meeting with the council Thursday in an email in which it promised an ‘open conversation and Q&A’ with Twitter staff, including the new head of trust and safety, Ella Irwin.

That came on the same day that three council members announced they were resigning in a public statement posted on Twitter that said that ‘contrary to claims by Elon Musk, the safety and wellbeing of Twitter’s users are on the decline.’

Those former council members soon became the target of online attacks after Musk amplified criticism of them and Twitter’s past leadership for allegedly not doing enough to stop child sexual exploitation on the platform. ‘It is a crime that they refused to take action on child exploitation for years!’ Musk tweeted.

A growing number of attacks on the council led to concerns from some remaining members who sent an email to Twitter earlier on Monday demanding the company stop misrepresenting the council’s role.

Those false accusations by Twitter leaders were ‘endangering current and former Council members,’ the email said.

The Trust and Safety Council, in fact, had as one of its advisory groups one that focused on child exploitation.

This included the National Center for Missing & Exploited Children, the Rati Foundation and YAKIN, or Youth Adult Survivors & Kin in Need.

Former Twitter employee Patricia Cartes, whose job it was to form the council in 2016, said Monday its dissolution ‘means there’s no more checks and balances.’

Cartes said the company sought to bring a global outlook to the council, with experts from around the world who could relay concerns about how new Twitter policies or products might affect their communities.

‘He doesn’t really care as much about what experts think,’ she said.

News of the council’s disbandment came as Twitter’s former censor was forced to flee the $1.1m Bay Area mansion he shares with his boyfriend after Musk shared part of his thesis which suggested letting children access gay hook-up app Grindr. 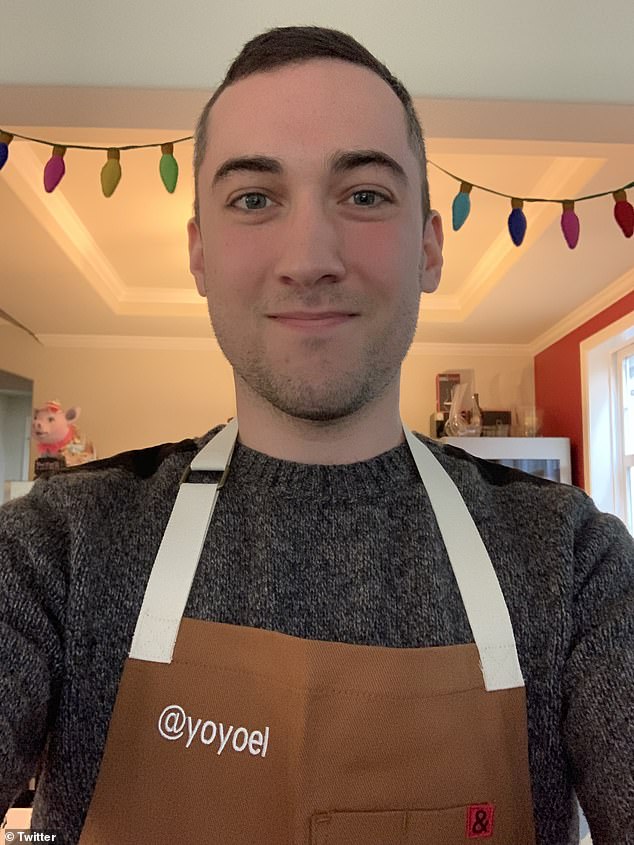 Roth, 34, and his partner Nicholas Madsen, 44, moved out of their property in El Cerrito over fears for their safety, the Washington Post reported.

The tweet said to have sparked the move saw Musk write: ‘Looks like Yoel is in favor of letting children being able to access adult internet services in his PhD thesis.’

He shared a screenshot of part of said document.

Roth’s thesis, written in 2016 while at the University of Pennsylvania, saw him claim that many under-18s access gay hook-up app Grindr, despite being too young to do so. He then suggested that an age-appropriate version of the app be created, in order to offer support to LGBT youth.

The former trust and safety manager has become emblematic of what critics say were the issues with Twitter censoring posts.

News of his apparent dealings with the FBI sparked claims the social media network was in bed with the federal government.

Snippets of his communications have been posted in recent days by conservative journalists Matt Taibbi and Bari Weiss as part of what Musk has termed the ‘Twitter Files’ – the fifth instalment of which were published on Monday.

Journalist Bari Weiss shared internal messaging showing some staffers for the social media platform were concerned of the negative repercussions of banning Trump, including allegations of censorship.

Employees assigned to evaluate Trump’s tweets also concluded that he did not violate policy and it would be hard to argue that he incited violence.

But staffers calling for Trump’s account to be banned were victorious when Twitter’s Head of Policy said his reference to ‘American Patriots’ in a January 8 tweet could be ‘coded’ as an ‘incitement of violence’.

His account was removed – until Elon Musk took over – even though dictators such as Iran’s Ayatollah who directly called for violence and murder were allowed to stay.

Musk himself has courted controversy in recent days. Over the weekend, Musk tweeted: ‘My pronouns are Prosecute/Fauci’. He was abruptly rebuked, with Fauci claiming on Monday that his safety is increasingly at risk.

Musk was also mocked after he was met with a chorus of boos when introduced as a surprise guest during a Dave Chappelle comedy gig in San Francisco.

The billionaire businessman appeared shellshocked at the hostile reception in Twitter’s headquarter city and remained mostly silent on stage.