Two police officers patrolling on horseback near St Kilda promenade rushed into the rough sea to retrieve two young sisters, aged 10 and 11, who were struggling in the water.

A distressed onlooker told the officers about 7.40pm on Boxing Day that the girls were in the water and needed help near St Kilda pier, Victoria Police said.

They rode from Jacka Boulevard to the foreshore, where they left their equipment and horses and jumped into the water. They swam out to the two girls, who were struggling to stay afloat.

One officer grabbed one of the girls, but got caught in an undertow and sucked towards construction infrastructure near the pier in rough and choppy waters, police said.

The child was below the surface, so the officer held her breath and dropped beneath the waves, pushing off the sea floor to boost the girl upwards.

The exhausted pair made it back to shore, with the officer swimming to nearby rocks and the child taken back to St Kilda beach by another onlooker. 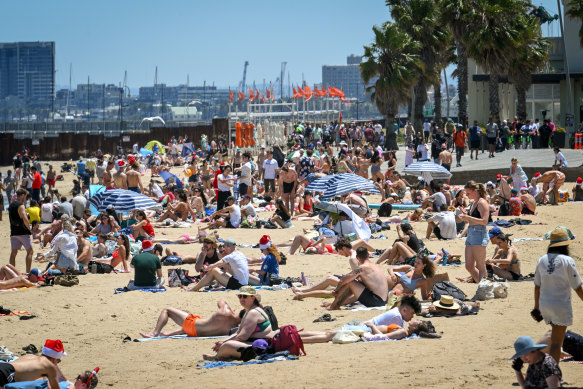 The other mounted branch police officer made it safely back to shore with the other girl, who was reunited with her rescued sibling and mum.

The police officers’ horses were on the foreshore when the rescuers returned, under the watch of two other mounted police.

Three people have died in several incidents in Victorian waters since Christmas Day.

A 17-year-old Pakenham boy died after being found unresponsive in waters at Mordialloc beach in Melbourne’s south-east on Boxing Day. Police and Life Saving Victoria had been searching for the boy when he was reported missing about 4pm on Monday, but he was found shortly after.

Another teenager also died after getting into difficulty while body surfing with two friends at an unpatrolled beach near Lorne on Christmas Day.

A third man died after suffering a suspected medical episode in waters at Lake Hume near Albury-Wodonga in Victoria’s north-east on Boxing Day. The man, believed to be in his 30s, had gone into the lake to chase his dog at Kookaburra Point in Ebden just before 3pm on Monday.