Tory coup that only lasted for two hours! ‘Hardman of Brexit’ Steve Baker tells Boris Johnson to end lockdown or face revolt – before tweeting his ‘full support’ by the end of the day

Boris Johnson was warned yesterday that a lengthy lockdown could see him toppled by Tory MPs – only for the attempted coup to collapse almost immediately.

Former minister Steve Baker had written to colleagues saying the Prime Minister’s position would ‘inevitably be on the table’ unless he sets out ‘a clear plan for when our full freedoms will be restored’.

Mr Baker, who played a leading role in Theresa May’s downfall, warned: ‘There is no reason to think there will be any real resistance in Cabinet to the argument for greater and longer and more draconian restrictions on the public. This could be a disaster.’ 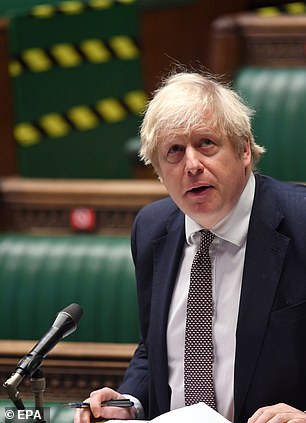 Former minister Steve Baker (left) said the position of Boris Johnson (right) would ‘inevitably be on the table’ unless he sets out ‘a clear plan for when our full freedoms will be restored’.

Calling for a ‘guarantee’ that lockdown measures will not be repeated next winter, he urged Tory MPs to raise concerns with chief whip Mark Spencer.

‘What this country needs is the complete success of [Mr] Johnson, with… a successful vaccination programme and a road to recovery back to freedom,’ he tweeted.

‘I am clear Boris is the only person to lead us out of these difficulties and I support him in that endeavour.’ 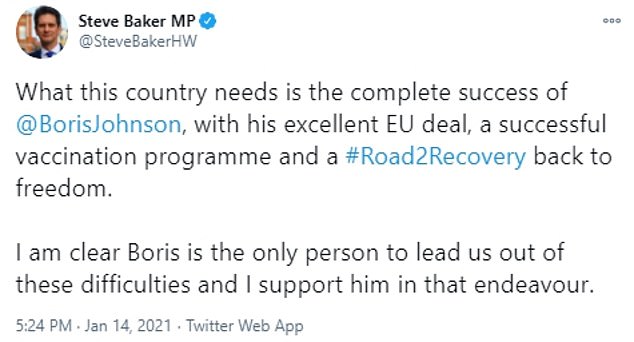 Another Tory MP, who voted against the second lockdown said: ‘There is no chance of the PM facing a leadership challenge at present.

‘He has just delivered Brexit and we have a vaccination programme that is running better than anywhere in Europe. I share Steve’s concerns about the impact of the lockdown, but this looks ill-judged.’

The drama followed more warnings about Covid curbs, with deputy chief medical officer Jonathan Van-Tam saying it would be three months before enough people were inoculated for the UK to start lowering its guard.

Government adviser Neil Ferguson said the easing of restrictions would be ‘a gradual process [until] the autumn’.

as, BA, Coup, Steve, Tory, Two-hour
You may also like: