Two men are killed in fatal avalanche on Colorado mountain

Two men died in a fatal avalanche on Saturday – bringing the number of people who have passed away on the Colorado mountains this season up to four.

Two snowmobilers were caught in the avalanche before being buried under 15 inches of insurmountable snow on the east face of Mount Epworth, near the Town of Winter Park.

Grand County Sheriff’s Deputies were only able to locate one body before nightfall on Saturday – but are expected to continue their search today.

The 58-year-old male they were able to locate was pronounced dead at the scene and was transferred to the Grand County Coroner’s Office. 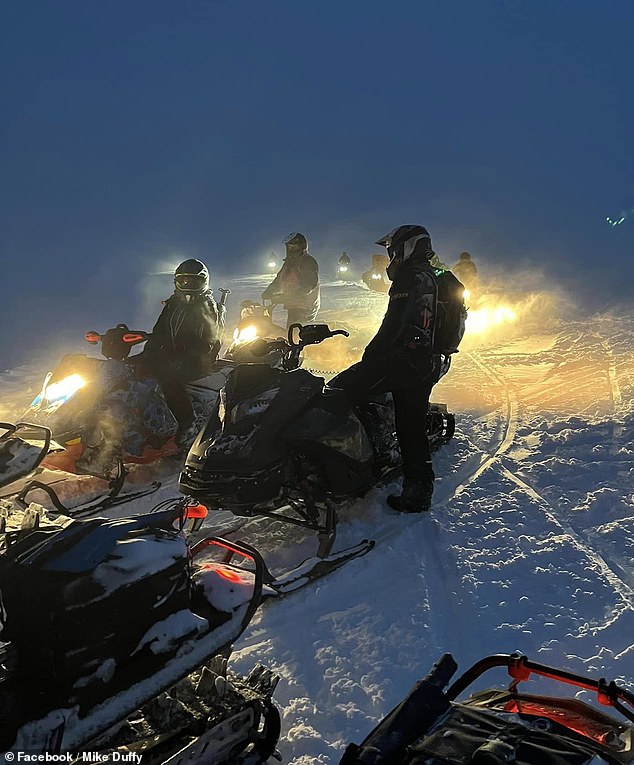 Mike Duffy, who helped with the rescue efforts, shared an image of his team helping find the men on the east face of Mount Epworth, near the Town of Winter Park 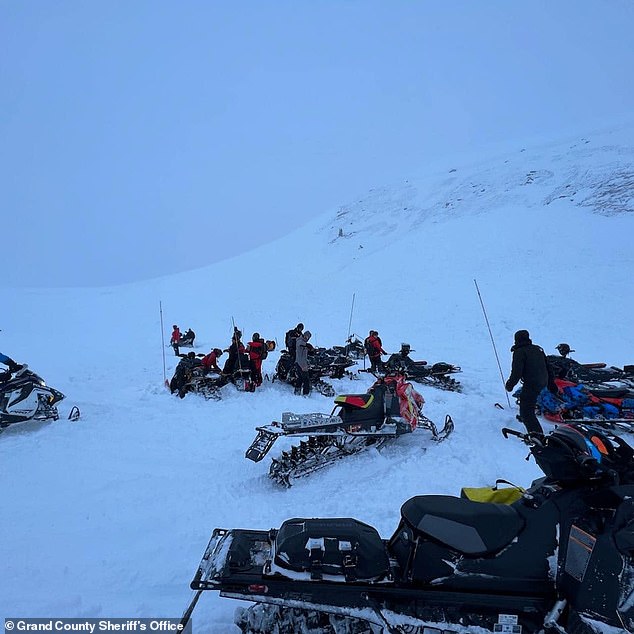 Passersby and emergency services attempted to give him CPR but their efforts were unsuccessful.

Colorado Avalanche Information Center said: ‘On January 7, 2023, at around 2pm, two snowmobilers were caught, buried, and killed in a large avalanche on the east face of Mount Epworth, about 6 miles east of Winter Park.

‘Another group in the area was able to locate one of the riders with a transceiver. They performed CPR, but their efforts were unsuccessful.

They also said that this was the fourth death on the mountains this season – the first was on December 26, then December 31, and now recorded two on January 7.

Continuing their stern warning, the center added: ‘The Colorado snowpack is currently very dangerous and will remain so for many weeks. You are unlikely to get obvious signs of instability like natural avalanches, cracking, and collapsing. 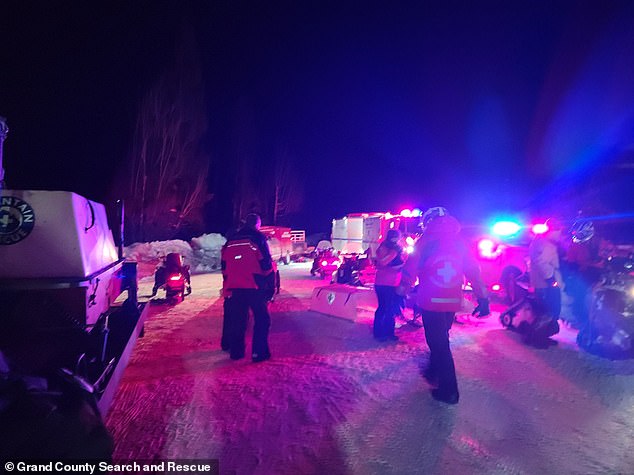 Emergency services shared images of the rescue efforts, but they confirmed that the two men have died following the avalanche. This brings the fatality total to four on the Colorado mountains this season

‘A glass-like shattering of the slab and thick blocks of snow dragging you into an unsurvivable avalanche could be the first sign of instability you get.

‘The most dangerous slopes face easterly, where winds have drifted thick slabs, but weak layers are present on most aspects. Many slopes are being triggered remotely or from a distance.

‘During this period of very high consequences, avoid being on, under or close to slopes steeper than about 30 degrees unless you know there is no weak layer beneath you.’

Grand County Sheriff Brett Schroetlin said in a press release: ‘Unfortunately, this is the second fatal avalanche that we have experienced this season in Grand County.

‘Our thoughts are with the family and friends of the victims. We encourage those recreating in our backcountry to regularly monitor the conditions and follow the advice of our avalanche professionals at Colorado Avalanche Information Center (CAIC).’

Mike Duffy, who runs motorized avalanche classes, said that his team came across the avalanche and quickly joined in the help efforts to find the two men.

He wrote: ‘Avalanche debris ended up on Pumphouse Lake. Students did an amazing job and were digging for a transceiver within a minute of being on scene. Students jumped into the water to uncover and remove one of the buried men.

‘When the avalanche hit the lake, it dropped the ice and we had water above the ice. Grand County Search and Rescue was on scene very fast and handled CPR. The debris was very deep in areas and a 300cm probe would not hit the ground. 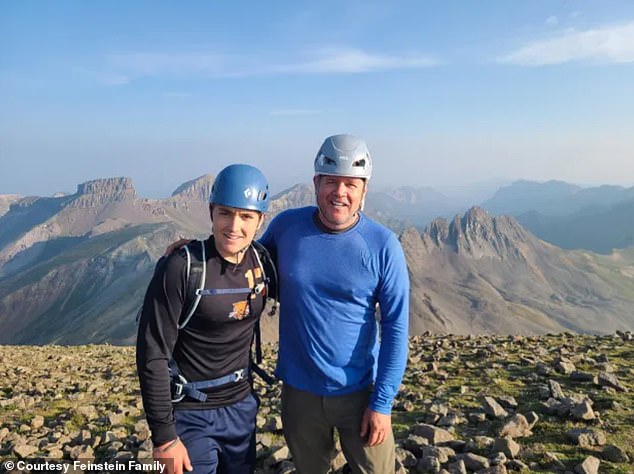 Nick (Left) Feinstein and his father Andy (Right) Feinstein were both trained outdoorsmen who enjoyed camping, climbing, fishing and skiing together. Nick died on the Colorado mountain on December 31 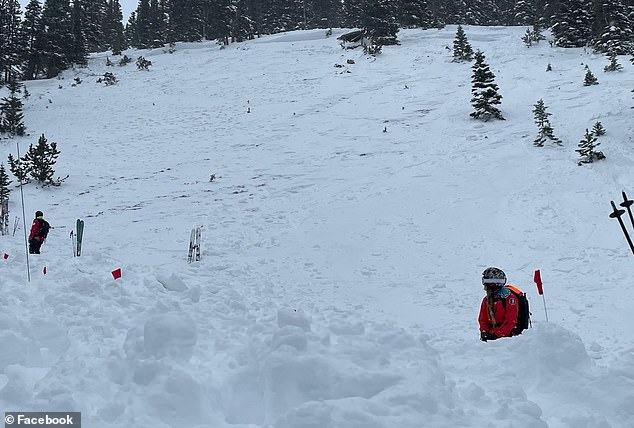 A team of nearly two dozen rescuers and canine teams were on the scene at Breckenridge shortly after the avalanche – two hours after the snow fell, a canine team found Nick’s body 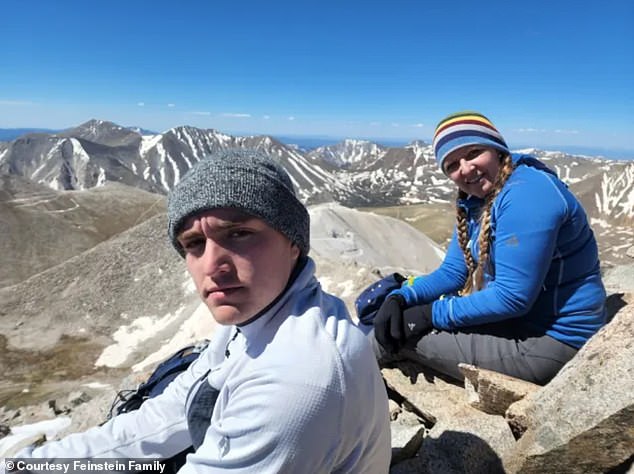 In addition to his parents, Nick is survived by his younger sister Rachel with whom he had a close relationship

‘Estimate that debris was 15 inches deep in spots. Probe line was not successful in finding the person without a transceiver. Coordination and team work with Search and rescue went very well. It was good to work with such good people.

‘Wind was increasing, visibility was worsening and darkness was setting in. For the safety of all involved, we had to stop searching. Thanks to everyone who helped out.

‘Condolences to the two families and friends. Very sad day in the mountains. Please stay away from the area while recovery efforts continue tomorrow.’

This comes just five days after the son of a university president was killed on New Year’s Eve in an avalanche that occurred while he was backcountry skiing with his father.

Nick Feinstein, 22, and his father Andy Feinstein were caught in an avalanche near the Breckenridge ski resort in Colorado, in an area known as The Numbers, on December 31.

Both men were experienced outdoorsmen and skiers.

The avalanche occurred at roughly 1pm last Saturday burying Nick and partially burying his father, who is president of the University of Northern Colorado.

Andy was able to dig himself out of the snow and ski to an area with cell phone reception to call 911 at 1.40pm.

A team of more than 20 rescuers and search dogs descended on the area to search for Nick. A dog team recovered his body at just past 3pm in about three feet of snow.

Andy was able to dig himself out of the snow and ski to an area with cell phone reception to call 911 at 1.40pm.

A team of more than 20 rescuers and search dogs descended on the area to search for Nick. A dog team recovered his body at just past 3pm in about three feet of snow.