UK-bound migrants die after boat capsizes in Channel off Calais

Paris: At least 27 migrants died after their dinghy capsized while trying to cross the Channel from France to Britain, a local mayor said.

According to fishermen, more migrants left France’s northern shores on Wednesday (local time) than usual to take advantage of calm sea conditions, although the water was bitterly cold. One fisherman called the rescue services after seeing an empty dinghy and people floating motionless nearby. 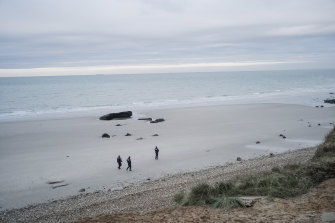 French police officers patrol a beach in the search for migrants in northern France last week. More than 20 people died when a boat capsized on Wednesday.Credit:AP

The local coast guard said they could not yet confirm the number of deaths, adding that rescue services had found around 20 people in the water of whom only two were conscious.

They estimated that there had been about 30 people on the dinghy before it capsized.

French Interior Minister Gerald Darmanin said he was heading for the coast. “Strong emotion in the face of the tragedy of numerous deaths due to the capsizing of a migrant boat in the English Channel,” he wrote in a tweet.

Two helicopters and three police or rescue boats were at the scene, local authorities said.

One fisherman, Nicolas Margolle, said he had seen two small dinghies earlier on Wednesday, one with people on board and another empty.

He said another fisherman had called rescue services after seeing an empty dinghy and 15 people floating motionless nearby, either unconscious or dead.

He confirmed there were more dinghies on Wednesday because the weather was good. “But it’s cold,” Margolle added.

Early on Wednesday, Reuters reporters saw a group of over 40 migrants head towards Britain on a dinghy.

The Channel is one of the world’s busiest shipping lanes and currents are strong. Overloaded dinghies often barely stay afloat and are at the mercy of waves.

While French police have prevented more crossings than in previous years, they have only partially stemmed the flow of migrants wanting to reach Britain – one of the many sources of tensions between Paris and London.