Fans a lot! Sweltering Household Cavalry trooper is cooled down with an electrical fan as guards are left dripping in sweat wearing heavy uniform on UK’s hottest day in history

While the rest of Britain goes into meltdown during the heatwave, the Household Cavalry and Queen’s Guard set an example by keeping calm and carrying on.

Troopers at Horse Guards Parade in central London today have taken the edge off searing temperatures by using electrical fans as they stand in the shade on the UK’s hottest day in history.

And standing outside Buckingham Palace under the glaring sunshine, the Queen’s Guard sweat through their heavy military uniform and thick bearskin caps.

The guards say they feel like a ‘pressure cooker’ under their tunics and helmets, and are drinking plenty of water and eating fruit to stave off heatstroke. 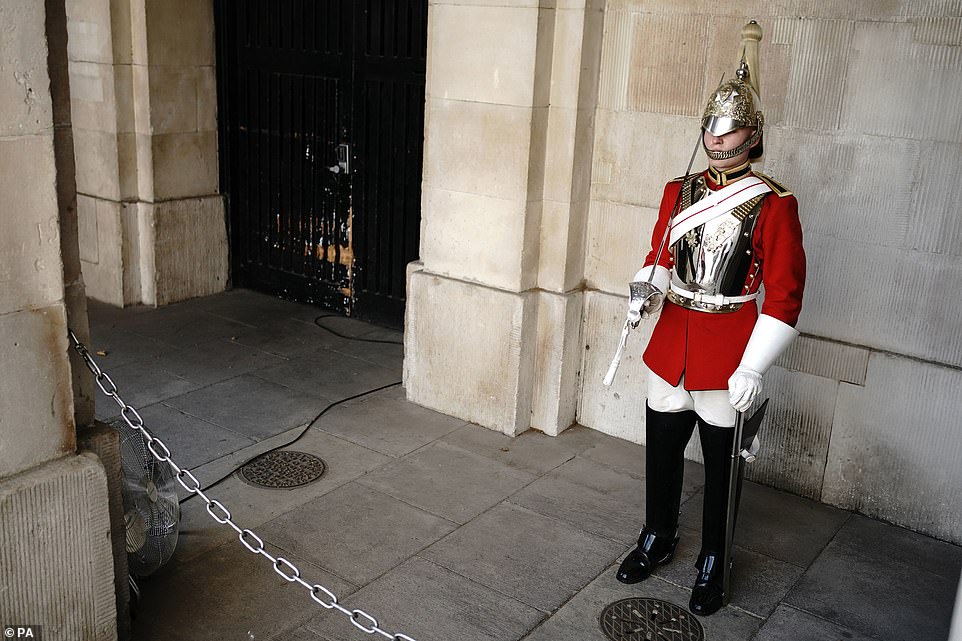 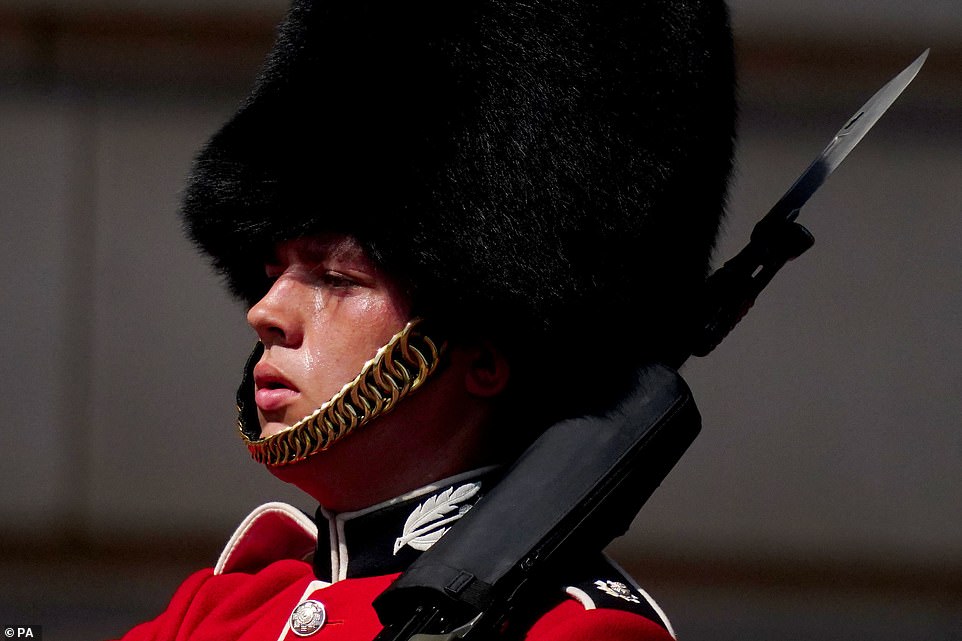 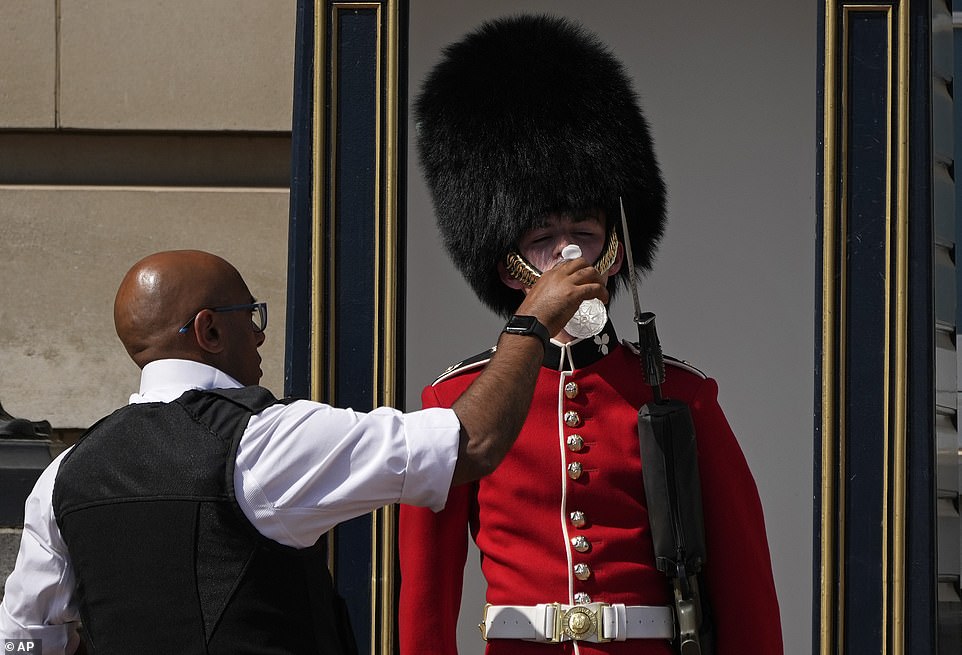 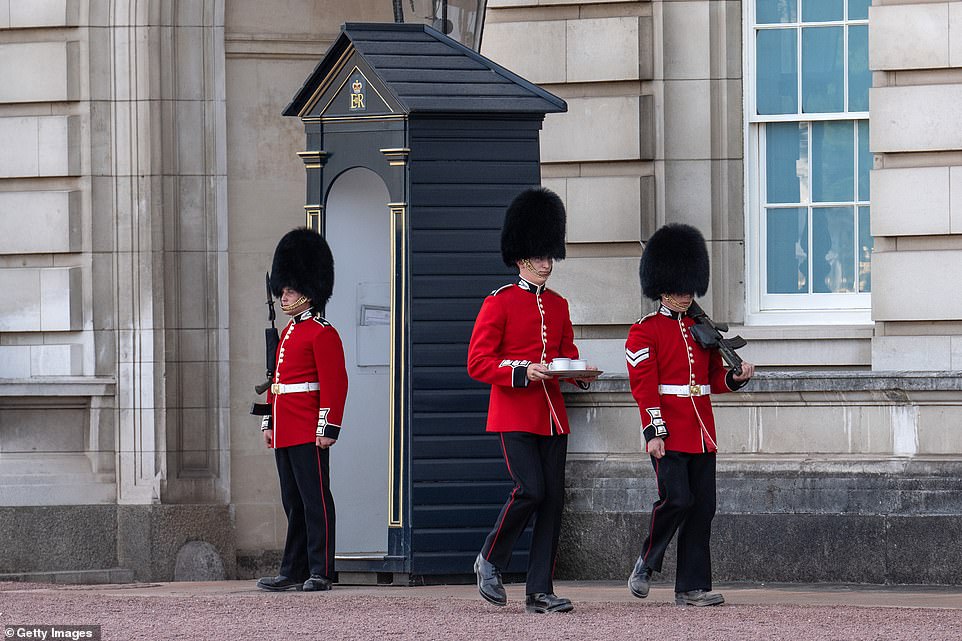 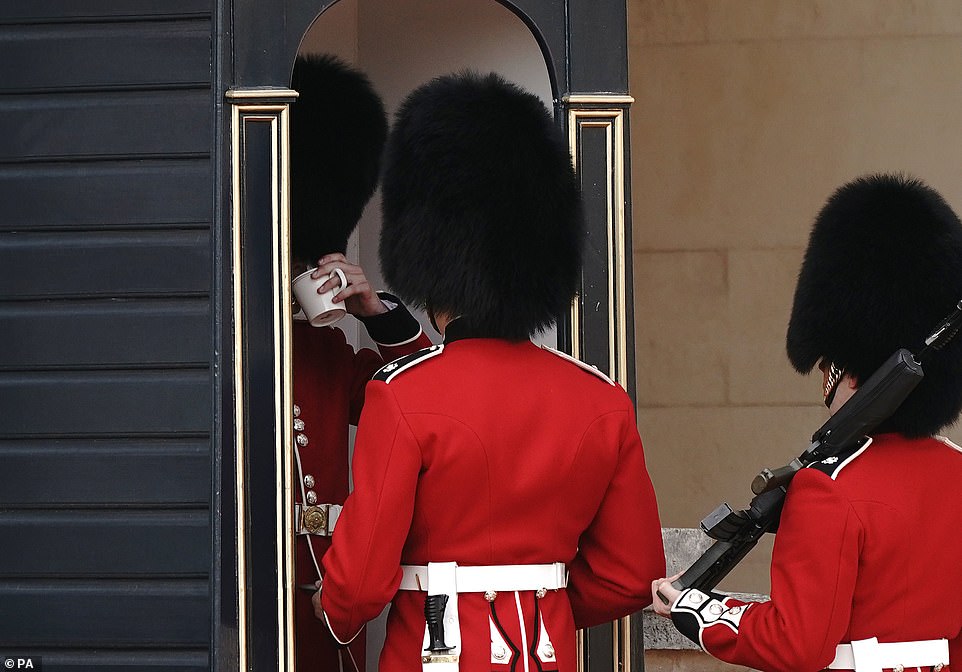 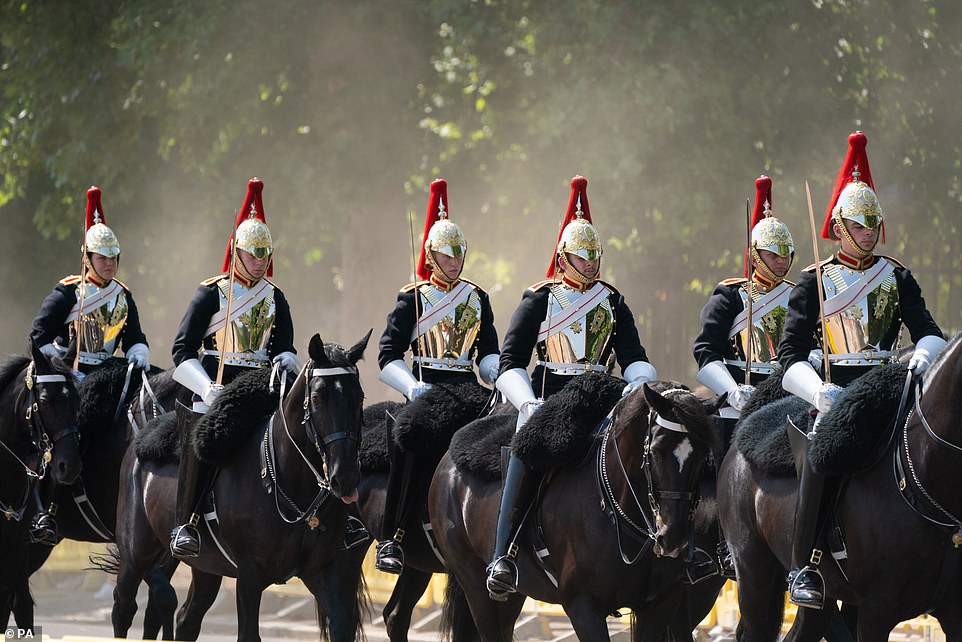 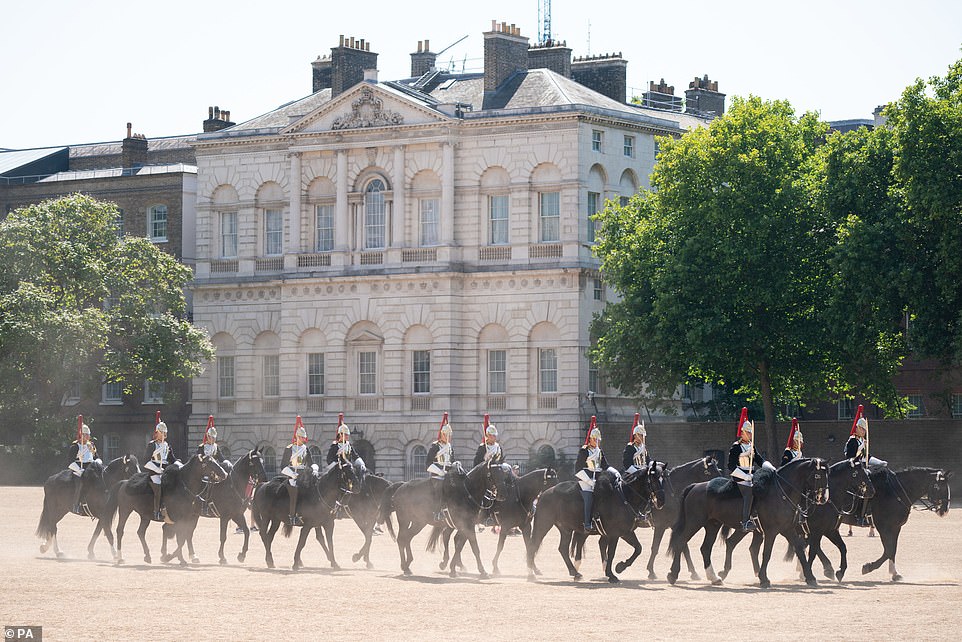 While the rest of Britain goes into meltdown during the heatwave, the Household Cavalry and Queen’s Guard set an example by keeping calm and carrying on. Pictured today 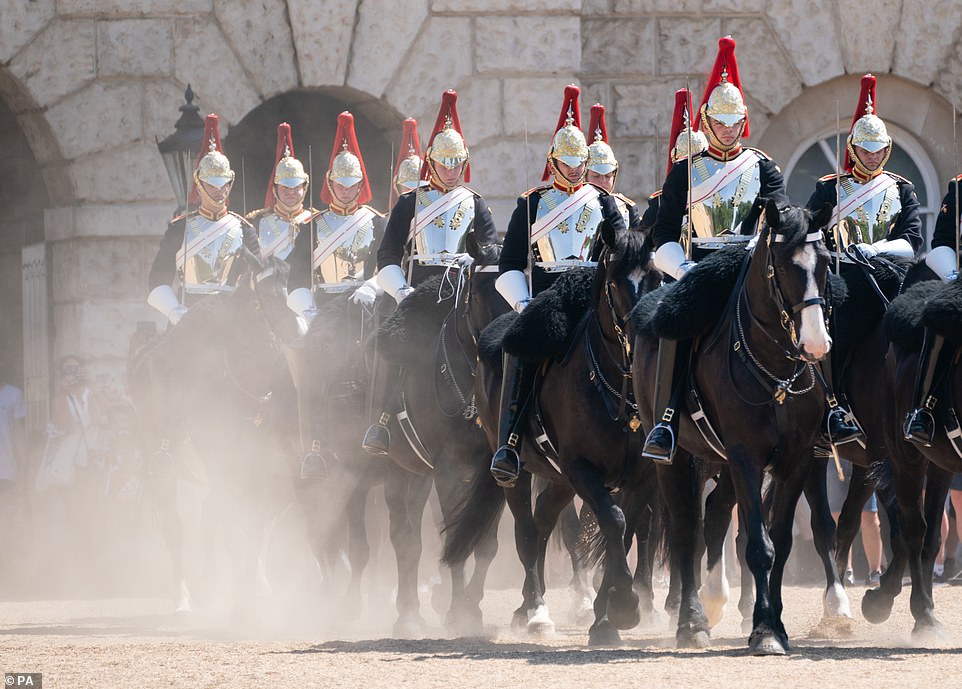 Trooper Brandon Richards said: ‘There’s a few things you can do [to keep cool]. ‘When you get in, make sure you take your kit off and you’re not laying around in it, stay in the shade, drink as much water as possible and, when you can, eat the fruit that’s given to us, eat the food and keep on top of yourself really’ 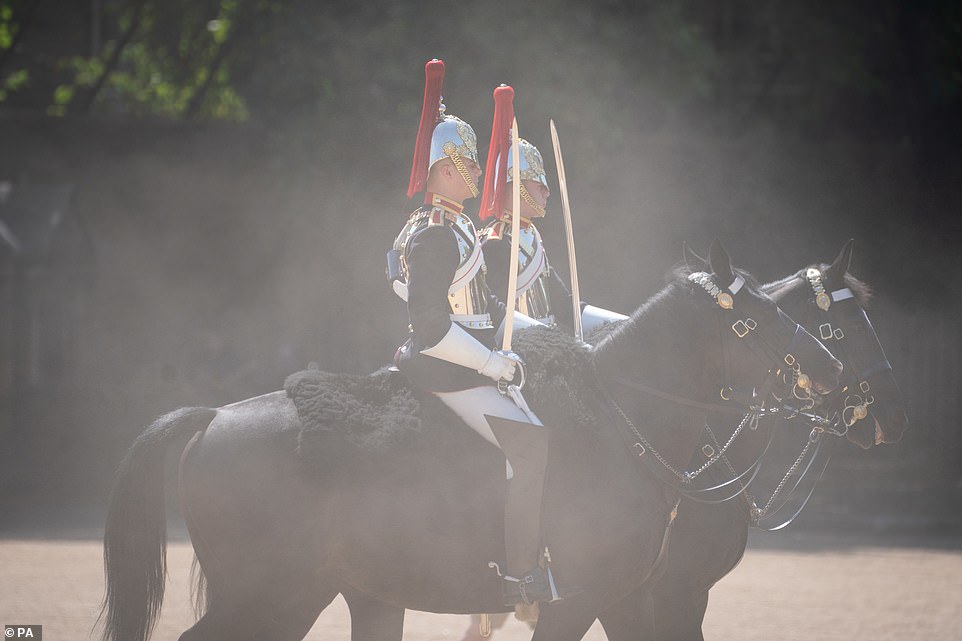 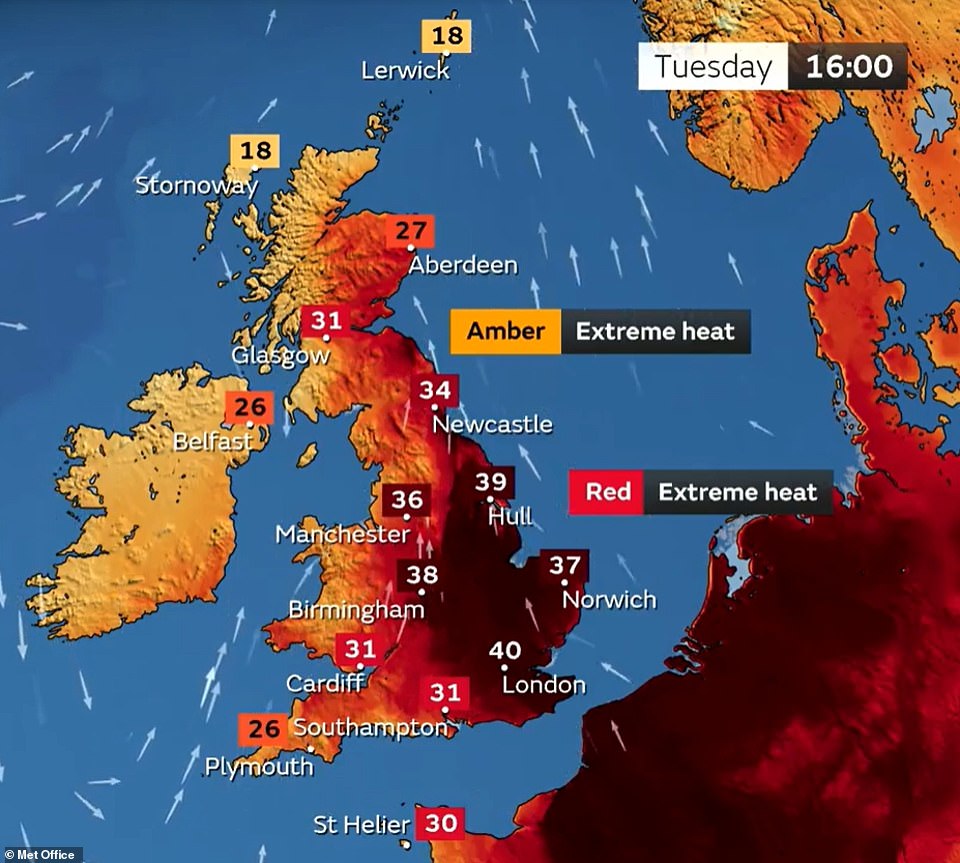 Is BEER the key to staying hydrated in the heatwave? Experts reveal that the high water content and electrolytes can boost fluid levels (but don’t have more than two pints!)

With temperatures across the UK set to hit record-breaking highs of more than 40C today, we’re all looking for ways to stay hydrated, and surprisingly a glass of beer could be the answer.

While drinking alcohol in the heat is usually considered a no-no because of its dehydrating effects, experts have revealed that indulging in a post-work pint could actually be helpful.

Responding to a viral discussion on Twitter on how to beat the heat, Dr Stuart Galloway of the University of Stirling, told Femail that because beer contains some electrolytes and has a high water content, it can be useful for hydration.

However, he added that any beneifical effect is likely to be lost if you drink more than two pints.

Trooper Brandon Richards told Forces Network: ‘There’s a few things you can do [to keep cool].

‘When you get in, make sure you take your kit off and you’re not laying around in it, stay in the shade, drink as much water as possible and, when you can, eat the fruit that’s given to us, eat the food and keep on top of yourself really.

‘It’s pretty extreme, especially with this heatwave currently… especially obviously last year wasn’t as hot, there was Covid, so we weren’t out as often. This year, everyone’s feeling it.’

Trooper Jamie Bartlett added: ‘You sweat quite a lot, especially in a helmet, sweat drips down your eyes, obviously. You have to wear ay tunic, so it gets quite hot. It’s like a pressure cooker.’

It comes as temperatures reached 40C for the first time on record in the UK, with 40.2C provisionally recorded at London Heathrow, the Met Office said.

The threshold was hit at 12.50pm as much of the UK sweltered in a heatwave, with parts of England and Wales under a red warning for extreme heat, posing a danger to life, pressure on the NHS and disruption across transport networks.

The extreme heat is fuelled by climate change, which is making every heatwave more intense, frequent and likely, scientists warn.

The new high for daytime temperatures comes after the UK experienced its warmest night on record on Monday, with temperatures remaining in the mid-20s.

Much of England and Wales are under a ‘red’ extreme heat warning until the end of Tuesday, with the heat causing disruption on transport networks and the risk of serious health impacts.

It comes after UK experienced its warmest night on record on Monday as the extreme heat saw temperatures remaining in the mid-20s in some areas.

Rail services have been heavily disrupted on Tuesday, with no services into or out of London Kings Cross all day, no Thameslink or Great Northern trains north of London, and only very limited services on East Midlands Railway. 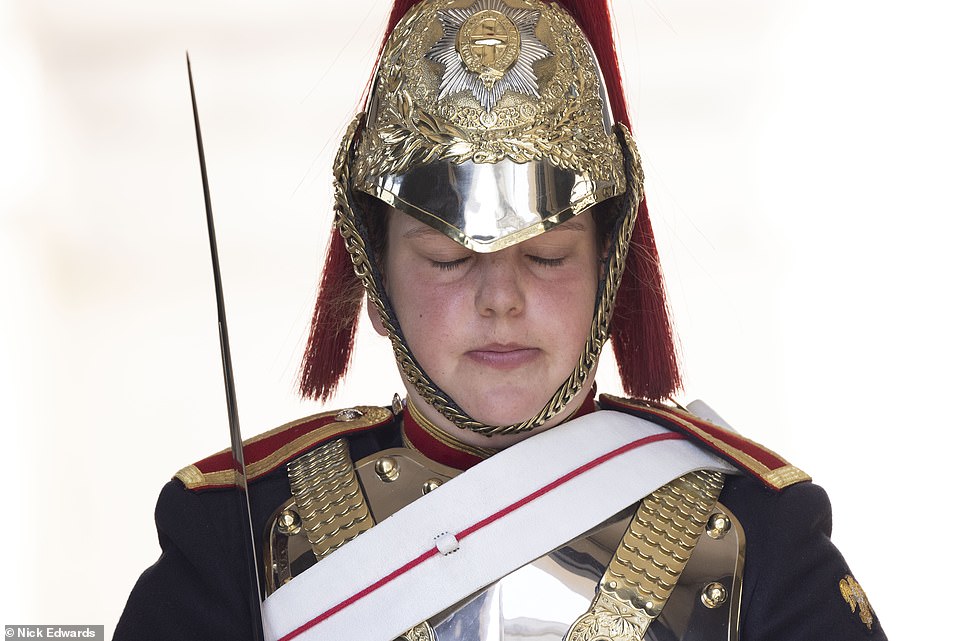 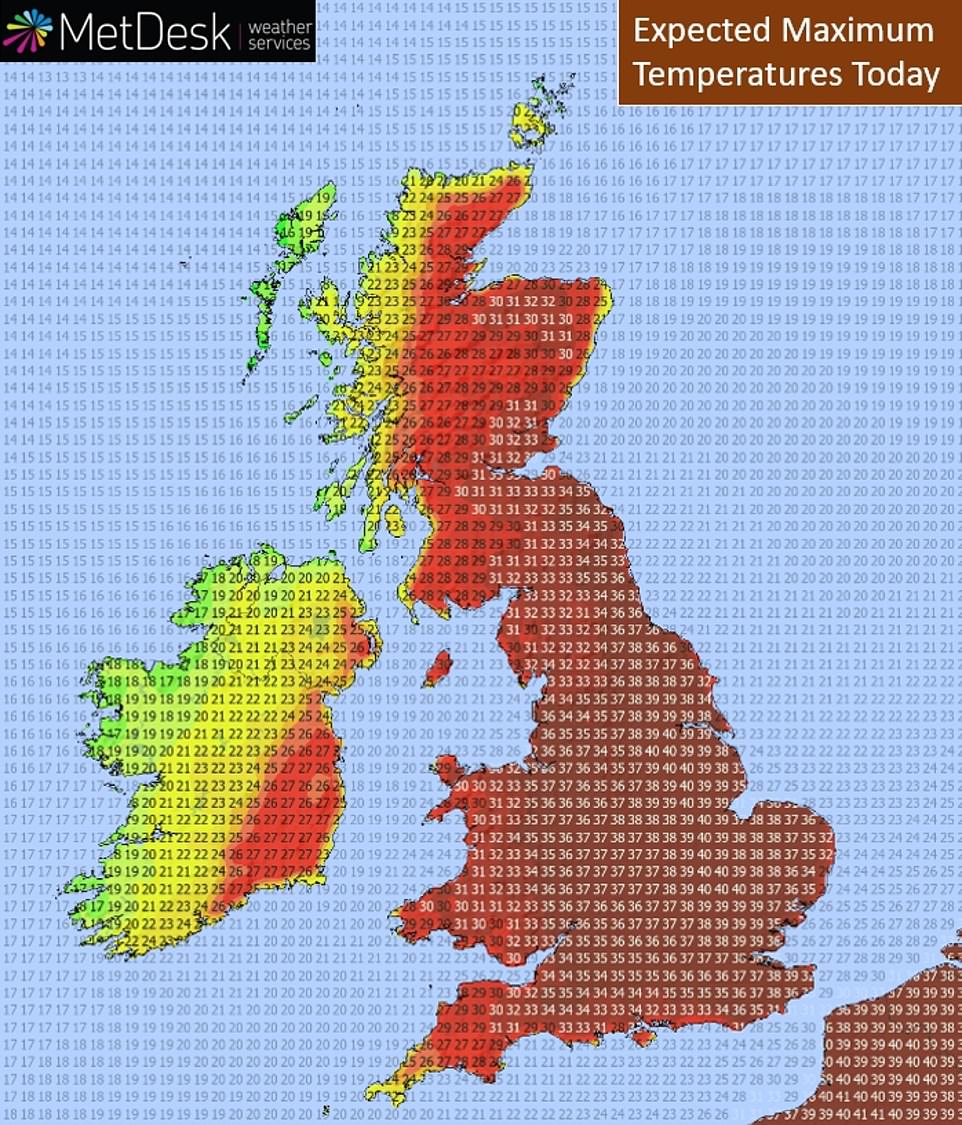 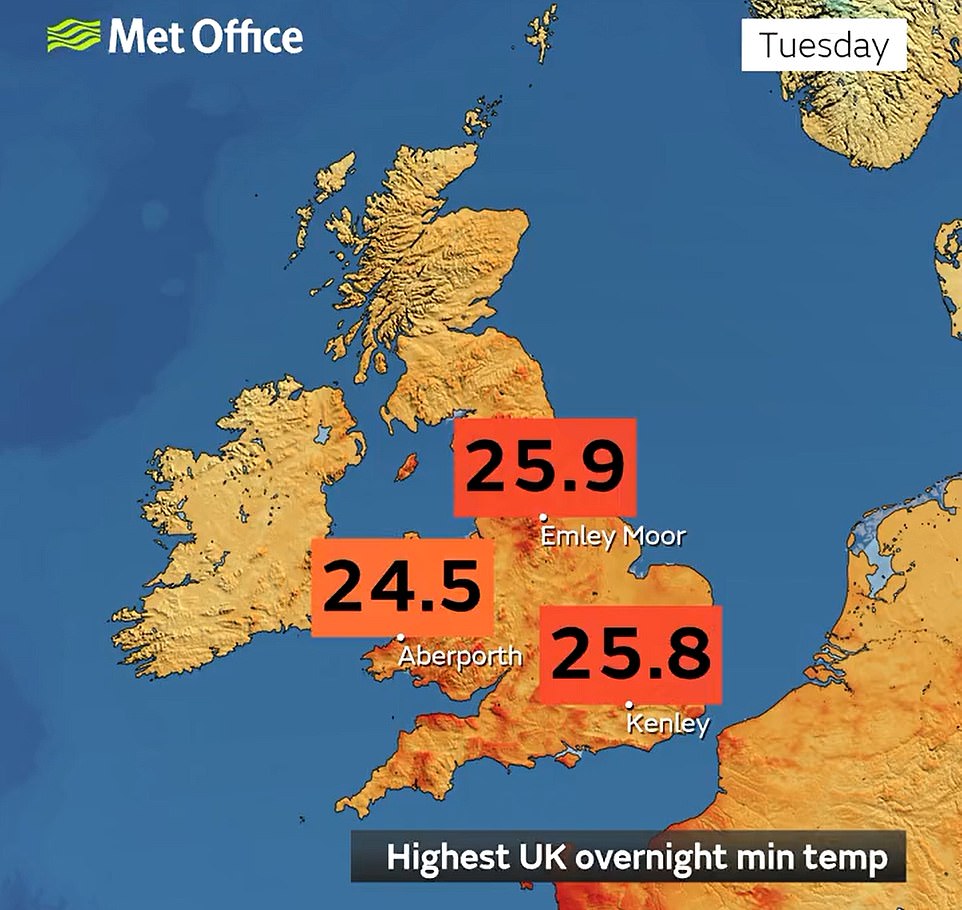 The UK has experienced its warmest night on record, according to provisional Met Office figures as shown in this map 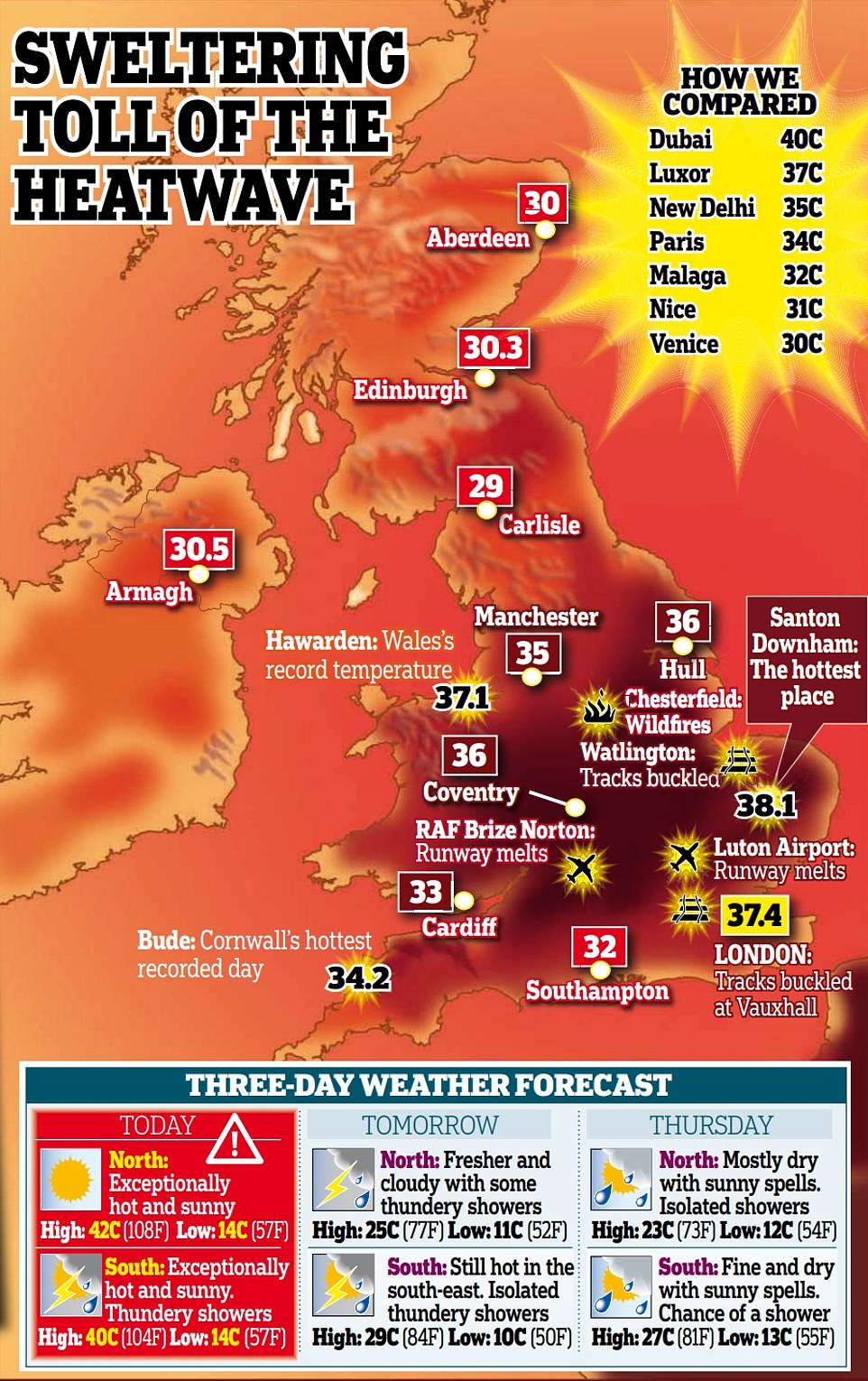 Are YOU drinking enough water? Experts reveal how much to consume to stay hydrated as temperatures in parts of the UK are expected to hit 43°C today

Around two thirds of Britons do not drink enough water, researchers have warned — as much of the UK roasts in record-breaking heat.

Experts say people should drink at least two litres of water every day, although this is a rough estimation and actually depends on a person’s age, gender and weight.

Now a new study for Austrian company Waterdrop, which found that 66 per cent of the population is not drinking enough water every day, has led to the creation of a ‘My Hydration’ app.

It estimates how much water a person needs to consume every day and allows them to track their progress by entering what they have drunk and when.

There are also very limited and disrupted services running into and out of London Euston, on Avanti West Coast and West Midlands Railway, and London Marylebone on Chiltern Railways, and temporary speed restrictions in the face of the risk of buckling rails.

Transport Secretary Grant Shapps conceded the UK’s transport network cannot cope with the extreme heat and said issues on the rails and roads will continue for decades during such heatwaves.

Much of Europe is also baking in record-breaking heat, which is fuelling wildfires in a number of countries.

The Supreme Court in central London was closed to visitors on Tuesday because of the temperatures and an air-conditioning fault, while many schools remained shut for a second day in the face of the extreme temperatures.

On the roads, figures published by location technology firm TomTom suggested commuters were heeding warnings not to travel unless necessary, with the level of road congestion at 9am on Tuesday lower in several cities than at the same time last week.

An East of England Ambulance Service spokesman said the service has detailed plans in place for dealing with the extreme hot weather.

He added: ‘We have seen above-average call numbers since Monday afternoon.

‘Demand on our service is very high and, even when the temperatures drop, we expect to still being seeing an impact from heat-related illnesses into the weekend.

‘Please continue to follow guidance during this period of hot weather and only call 999 in life-threatening emergencies,’ he urged.

Met Office meteorologist Annie Shuttleworth said it is ‘extraordinarily unusual’ to see temperatures in the 30s by the morning rush-hour in the UK.

She said the high overnight temperatures had led to a very warm start to the day, and added: ‘We’re looking at the maximum temperatures somewhere between 40C-41C, and that’s looking to be across the Lincolnshire and Yorkshire region.’

Britons have been urged to stay inside during the hottest period of the day, between 11am and 4pm, and wear sun cream, a hat, stay in the shade and keep hydrated with water – and there are warnings about swimming in lakes, rivers and reservoirs.

The Met Office has also issued a yellow warning for heavy showers and thunderstorms over much of the South East and eastern England which may bring disruption during Wednesday afternoon, as temperatures drop for their current searing highs.