The UK’s Middle East minister was today blocked from visiting a holy site in Jerusalem by Israeli police.

Lord Ahmad, a practising Muslim, was stopped from entering the al-Aqsa mosque by security forces during his first visit to the region as the UK’s Middle East minister.

Lord Ahmad was forced to wait outside the mosque for half an hour before being let in, reports the BBC.

The Islamic authority in charge of the al-Aqsa mosque said it was ‘unacceptable’ for Israeli police to block the minister from entering the holy site. ‘Whether he came as a minister or as a Muslim he shouldn’t have been blocked,’ it said. 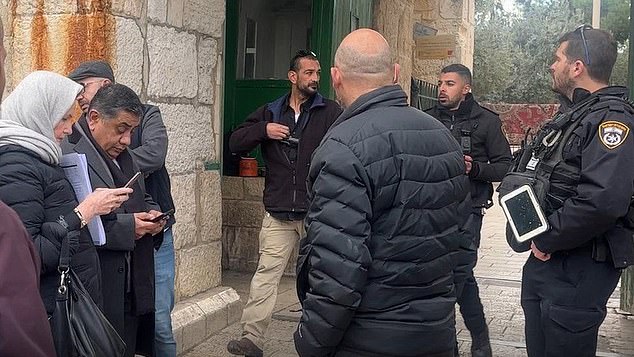 Lord Ahmad, a practising Muslim, was stopped from entering the al-Aqsa mosque by security forces during his first visit to the region as the UK’s Middle East minister. Pictured: Lord Ahmad (left) standing outside the holy site after being blocked from entering by Israeli police 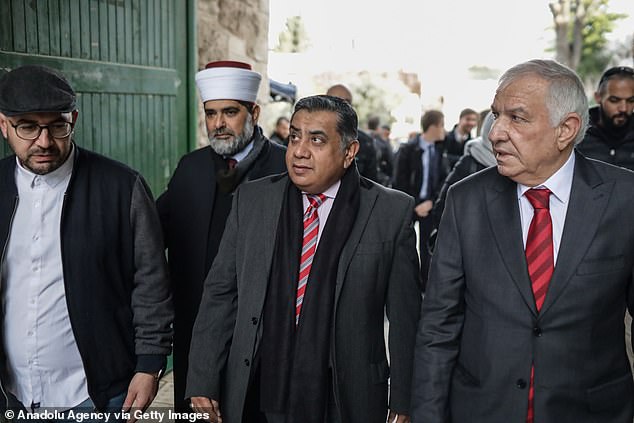 Lord Ahmad later played down the 30 minute wait, where he and other UK officials were told to stand beside a police checkpoint, and told the BBC it was ‘security checks’.

The UK officials had told the Israeli police that Lord Ahmad was a British government minister and that the visit had been organised by the Islamic endowment that runs the mosque, the Waqf.

But the Israeli police refused to accept this for half an hour – despite the UK officials trying to clarify Lord Ahmad’s identity by showing a picture of the minister meeting the Israeli Foreign Minister Eli Cohen on Wednesday.

The Waqf said it had given the details of Lord Ahmad and the other UK officials to Israeli police at the site.

‘This was unacceptable… I talked to the police and I came down from my office with my staff to apologise to the minister for the actions of the Israeli police.’

Lord Ahmad and the UK officials were eventually allowed into the mosque where he prayed and was given access to restored religious manuscripts. 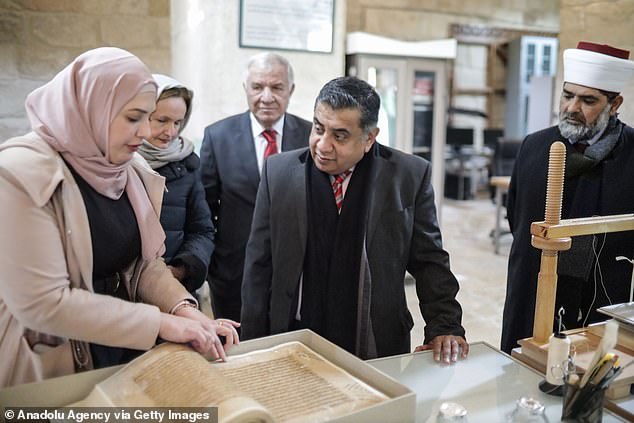 The UK government dismissed any suggestion that he was ‘prevented’ from entering the site.

‘But one hopes that when someone’s coming specifically for the act of worship… one hopes, whether here in Jerusalem or elsewhere, across the world, that people are given the opportunity to freely practice and profess their faith,’ he said.

Meanwhile, the Palestinian prime minister accused Israel’s new ultra-nationalist government of blocking ‘even the most non-violent ways of fighting the occupation,’ after Israel retaliated for the Palestinians’ successful effort to enlist U.N. help.

Israel has stripped Palestinian officials of VIP privileges and broken up a meeting of Palestinian parents discussing their children’s education.

On Sunday, Israel’s security minister ordered the police to ban the Palestinian flag, a symbolically fraught move after what one Israeli rights group reported was the deadliest year of the conflict in decades.

‘Today I directed the Israel Police to enforce the prohibition of flying any PLO flag that shows identification with a terrorist organization from the public sphere and to stop any incitement against the State of Israel,’ Itamar Ben-Gvir announced on Twitter.

It was the new government’s latest retaliation after a Palestinian push for the U.N.’s highest judicial body to give its opinion on Israel’s 55-year military occupation of the West Bank.

Shtayyeh told Haaretz that the Israeli sanctions were designed to collapse the Palestinian Authority and would have dire consequences. 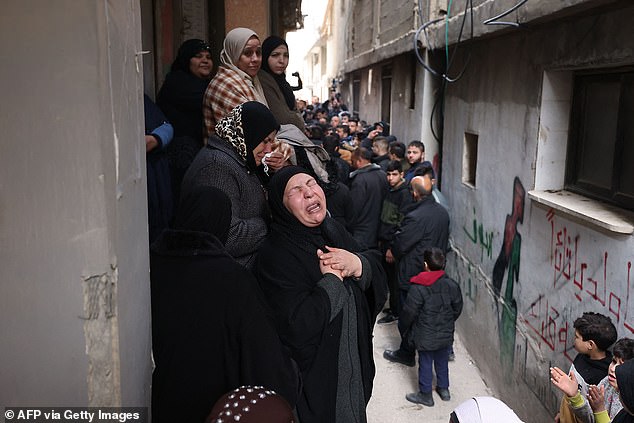 ‘We have the right to complain and tell the world we are in pain,’ he said in comments published Monday. ‘Israel wants to prevent even the most non-violent way of fighting the occupation.’

Ahmad Aldeek, assistant to the Palestinian foreign minister, said ‘The Israeli government is waging an open war on the symbols and components of the State of Palestine.’

‘This increases our insistence on pursuing the Israeli government and putting it on trial in all international forums,’ Aldeek said Monday.

Under Israeli law, flying the Palestinian flag is not a crime. An attorney general in 2014 ruled that an ordinance decades earlier granted police the authority to confiscate a flag if it results in disruption of public order or breach of peace, or is done in support of terrorism.

Ben-Gvir’s order, one group said, falsely implies that any public display of the Palestinian flag is itself such a disruption.

‘This gives the police unfettered discretion to ban the waving of the Palestinian flag under all circumstances,’ according to a statement from Adalah, an Arab minority legal rights group. 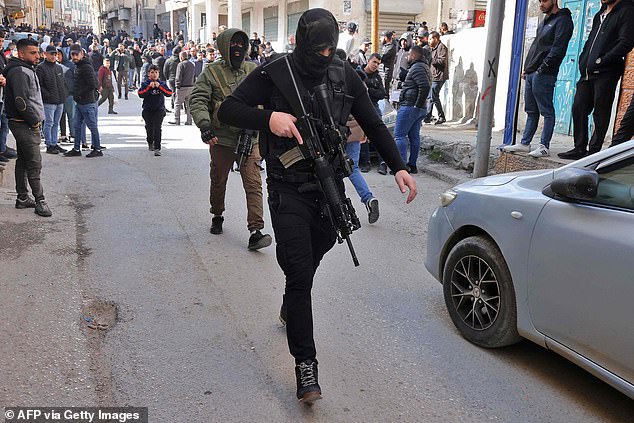 Palestinian gunman attend the funeral of Samir Aslan, 41, at Qalandia refugee camp in the occupied West Bank, on January 12

But after Israel and the Palestinians signed a series of interim peace agreements known as the Oslo Accords, the flag was recognized as that of the Palestinian Authority, which was created to administer Gaza and parts of the occupied West Bank.

Israel opposes any official business being carried out by the PA in east Jerusalem, and police have in the past broken up events they alleged were linked to the PA.

Netanyahu told his Cabinet on Sunday the measures against the Palestinians were aimed at what he called ‘an extreme anti-Israel’ step at the U.N.

Israel’s Palestinian citizens make up 20% of the population and they’ve had a turbulent relationship with the state since its creation in 1948. That was the year that hundreds of thousands of Palestinians fled or were forced to flee in the events surrounding the establishment of the state of Israel.

Those who remained became citizens, but have long been viewed with suspicion by some Israelis because of their ties to Palestinians in the West Bank, Gaza Strip and east Jerusalem, territories Israel captured in the 1967 Mideast war.

The Palestinians seek all three areas for a future independent state. Netanyahu’s new government is dominated by hard-liners who oppose Palestinian statehood.