The current mild conditions are set to come to an abrupt end next month, with temperatures ready to plunge well below freezing alongside the return of snow. The mercury will start to drop from the first weekend of March, with snow starting in Scotland and northern areas before moving further south, according to the latest weather maps.

The snow risk map shows much of Scotland covered by a 85-100 percent snow risk at 6pm.

This snow risk area increases by Sunday afternoon and starts to edge further south, with parts of northern England also covered by a high risk of snow.

From the early hours of Monday morning the whole of Wales and parts of the Midlands are covered by a high snow risk, as indicated by the dark red colouring. 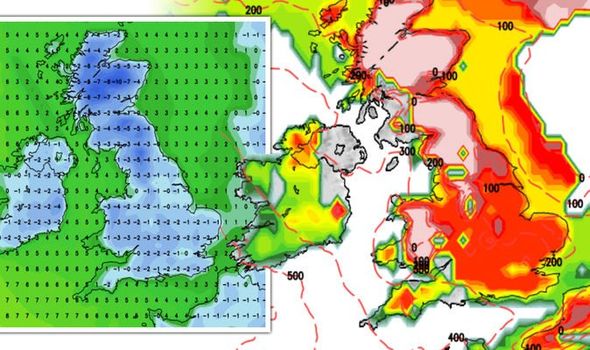 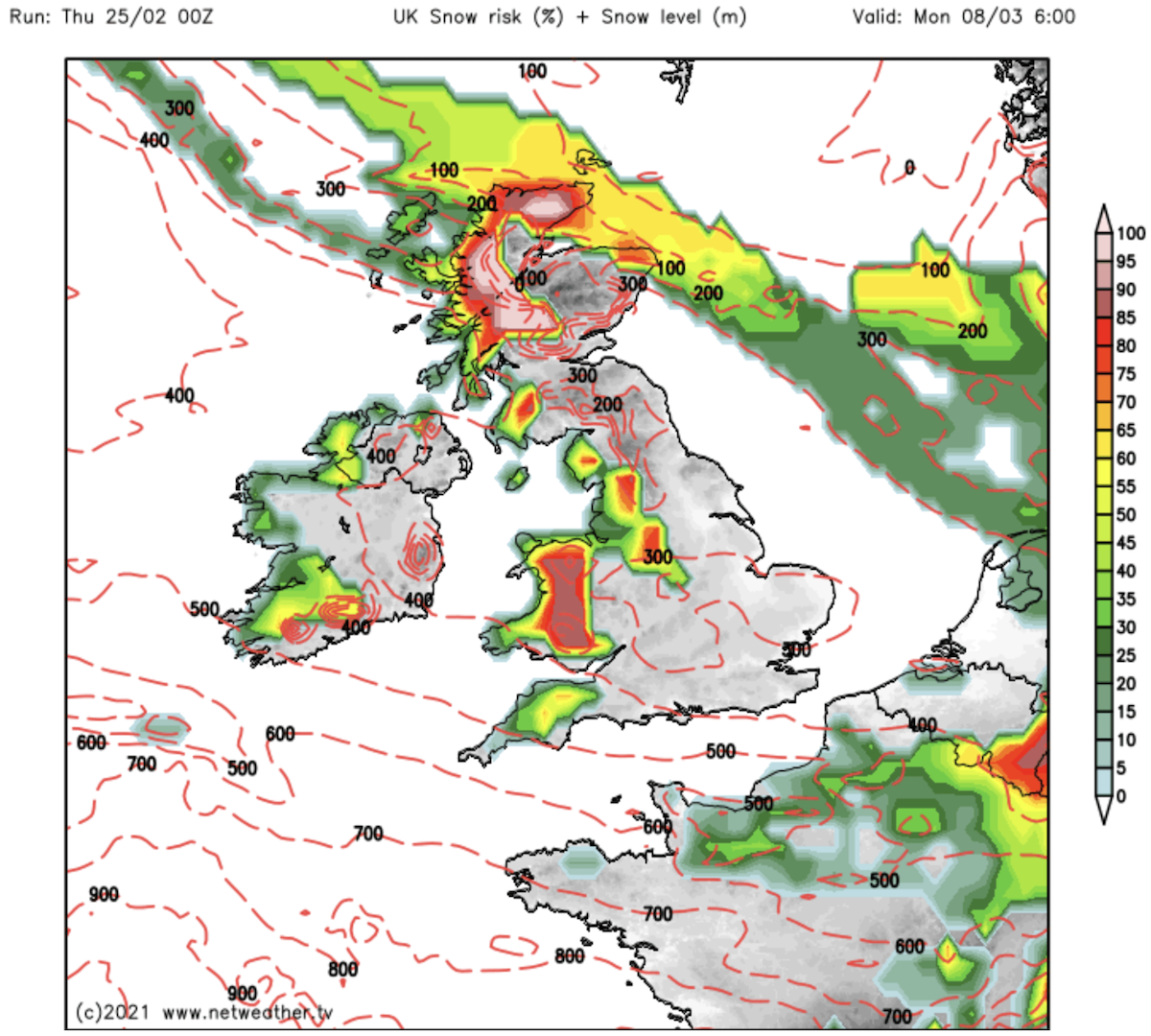 The risk of snow then begins to build through Monday evening and Tuesday morning, with large swathes of Scotland, northern England and the Midlands covered by a 100 percent snow risk.

The snow risk is forecast to move further south from 9am on Tuesday, culminating at 6pm when the whole of the UK is covered by a high snow risk.

Weather charts shows the whole of Britain turn red, as Scotland, northern England and Wales are covered by a 100 percent snow risk, while the rest of England has a 80 percent chance of snowfall.

Risk of show then reduces overnight, before a last fleeting bite of wintry showers is forecast for Wednesday evening at 6pm in west Scotland the south east of England. 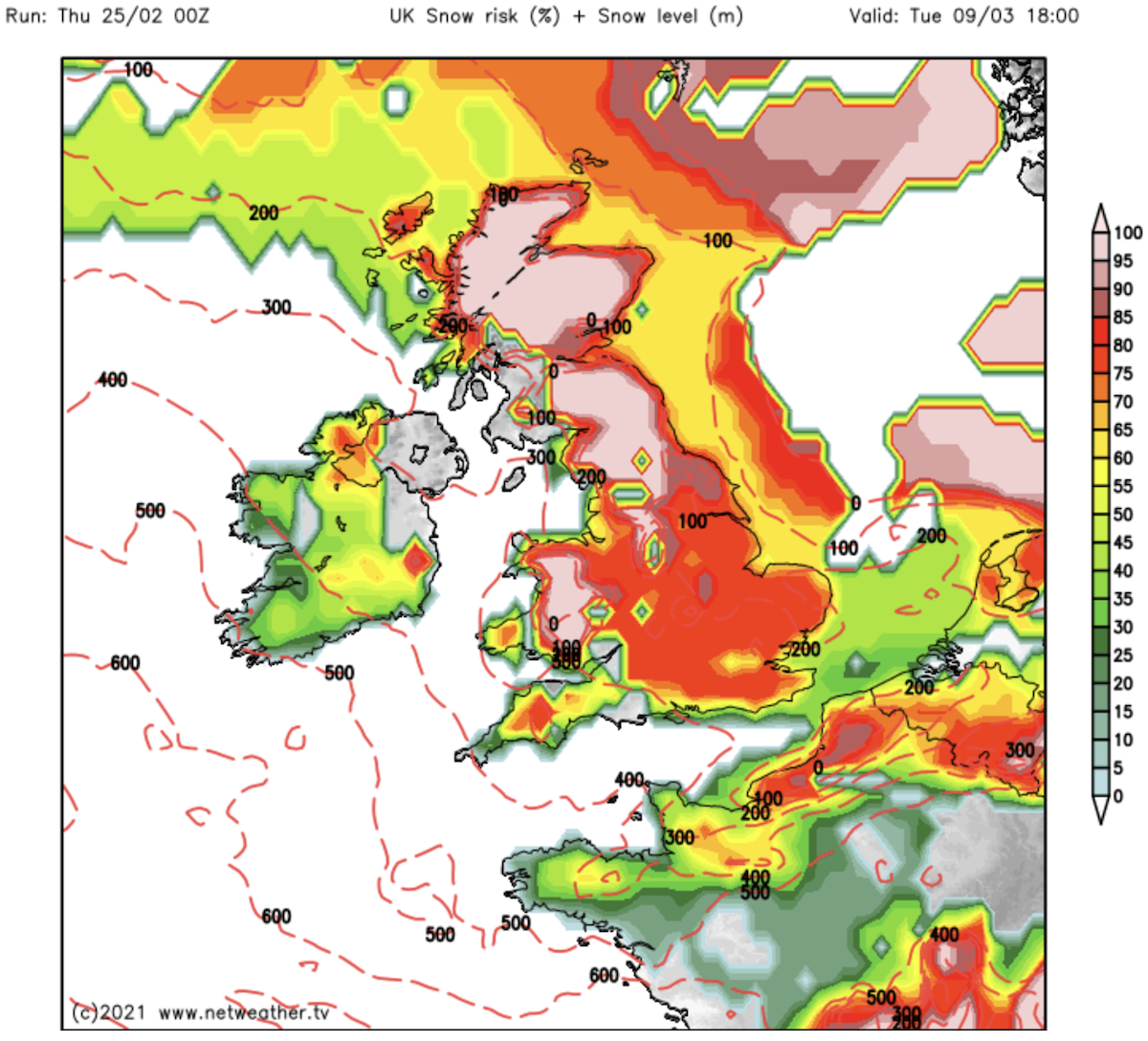 From Thursday March 11 to Saturday March 13, the snow risk remains confined to the Scottish highlands.

The snowy conditions looks set to coincide with a plunge in temperatures.

Temperature charts show the mercury will start to dip in northern parts of the UK from Saturday, March 6, while England continues to see mild conditions.

As Monday approaches, the mercury starts to plunge for the whole the UK with -4C forecast in Scotland and highs of 4C forecast across England.

Freezing temperatures are forecast for Tuesday morning, with -7C forecast across Scotland and -5C expected in northern England. 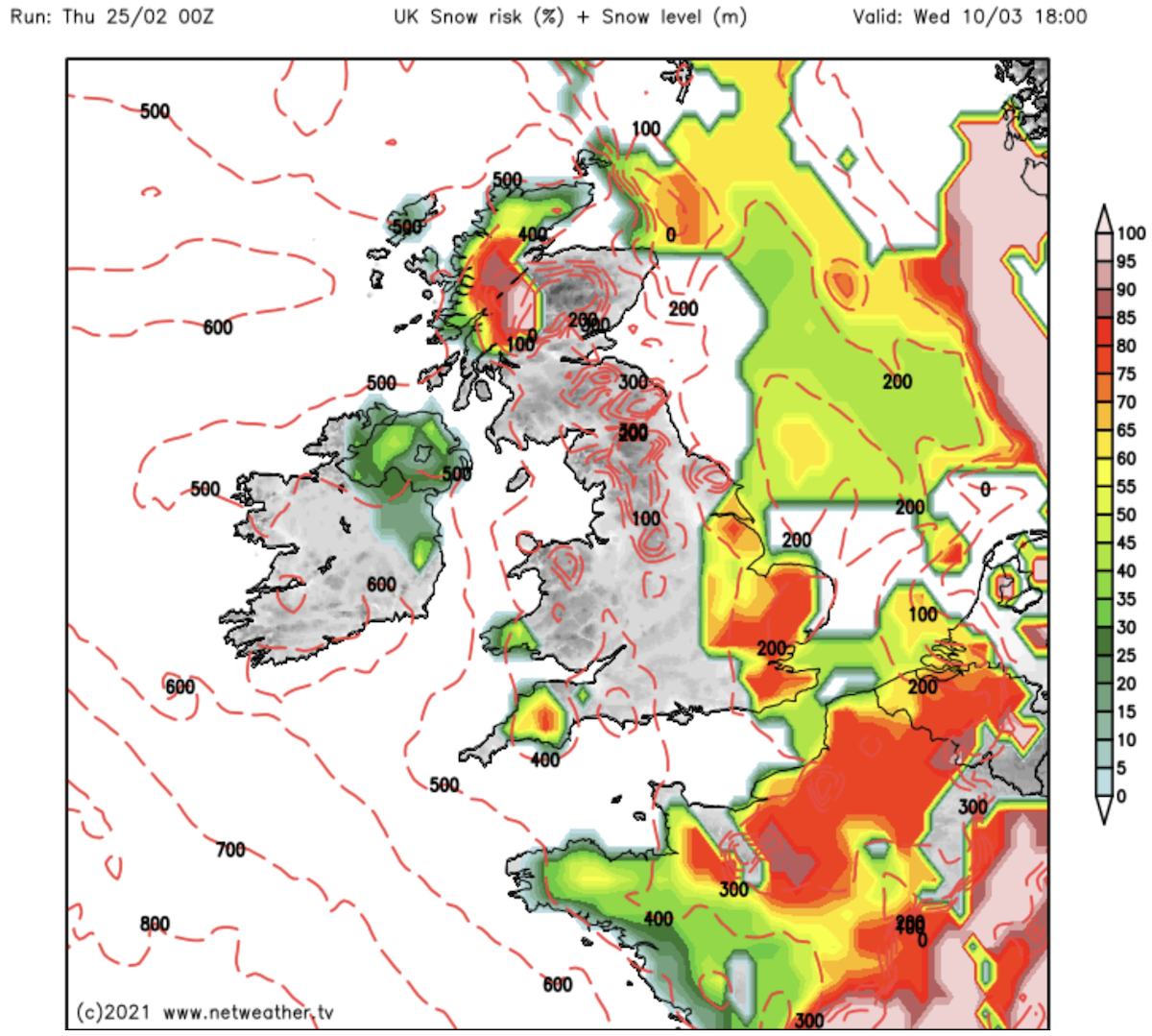 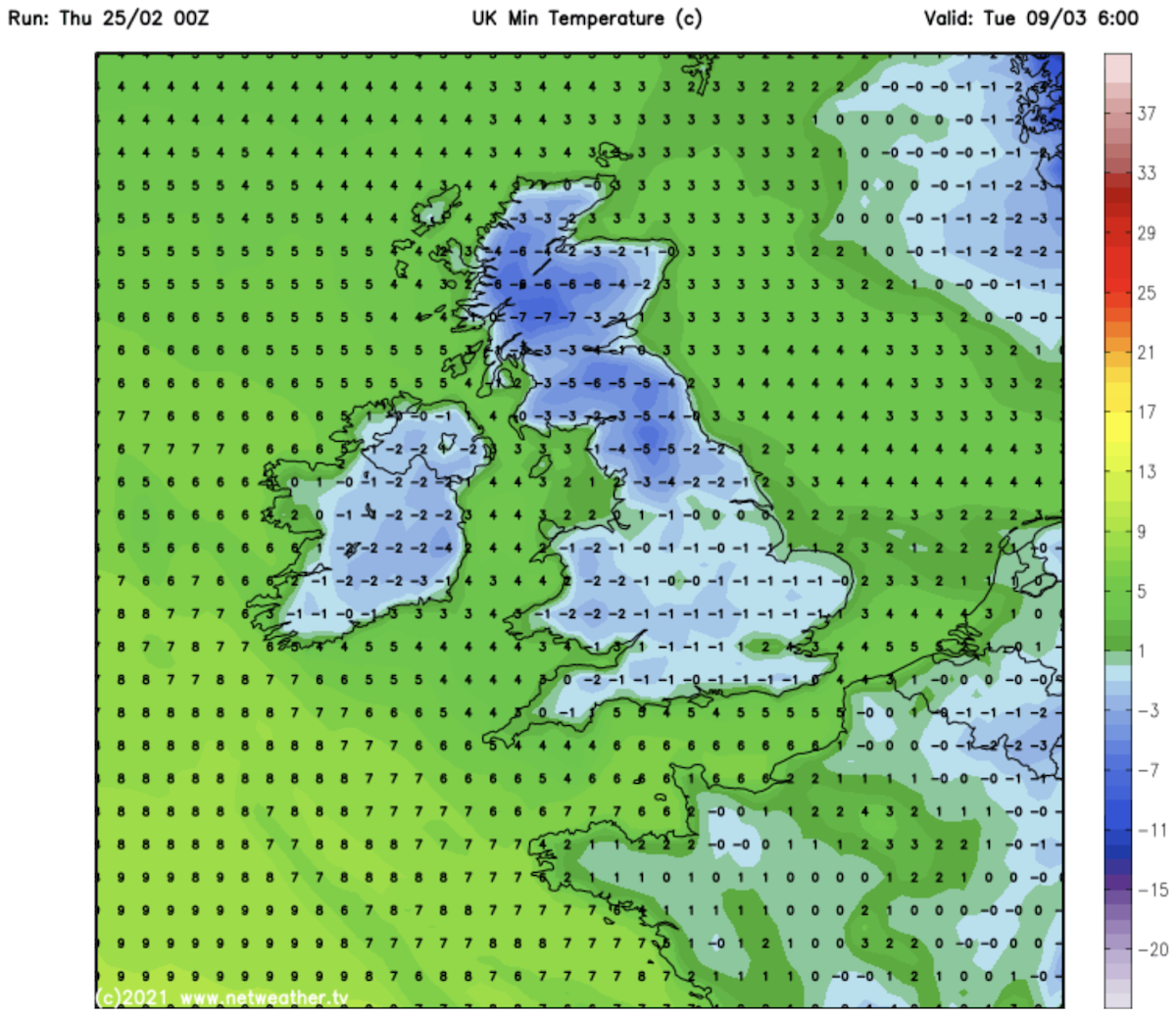 Wales and the west of England looks set for the mercury to dip to -2C, while eastern parts will see temperatures fall just below freezing.

Wednesday March 10 looks set to be colder still, with -10C forecast in Scotland and temperatures averaging -3C for the rest of the country.

Netweather forecasters warn snow is possible at the start of March.

They state: “Some rain or showers before probably turning much colder from the North with snow possible especially over hills in the North and East.” 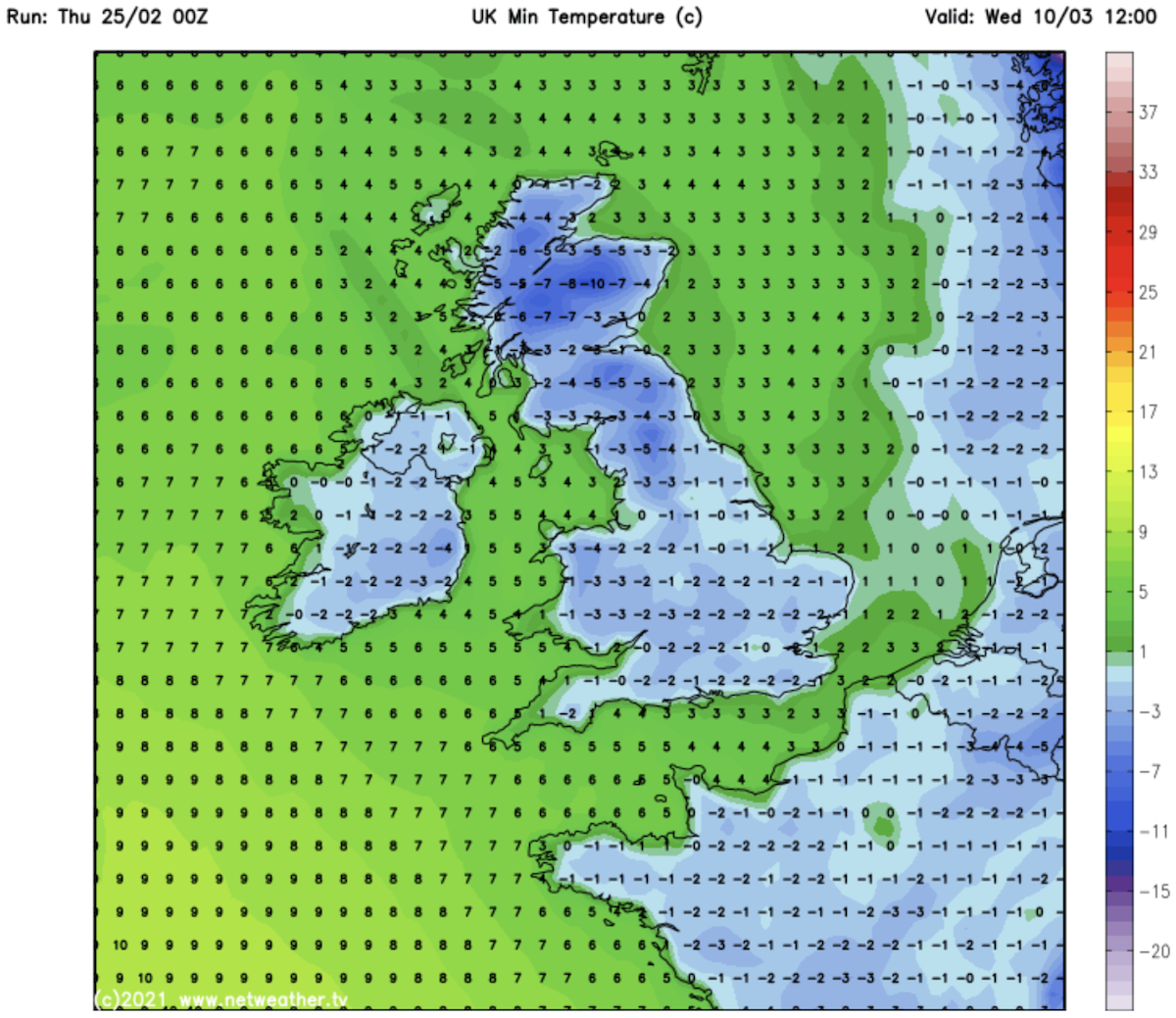 From Monday, March 8 they add: “Perhaps wintry at first but probably becoming mainly dry although with night frosts that could be quite sharp.”

BBC forecasters say the period will become more unsettled with the risk of cold snaps.

They state: “Heading through mid-March and beyond, high pressure is expected to recede farther into the Atlantic.

“Its influence on the UK’s weather will recede. This would allow a trough of low pressure to develop over western and north-western Europe, leading to more unsettled and changeable conditions.”