This is the moment Ukrainian forces destroyed a Russian T-73 in a tank duel.

Aerial footage shows a Ukrainian T-64 rolling down a road before it opens fire and appears to hit a Russian adversary further down the same road.

The T-64 appears to land a direct hit with the first shot, quickly following up with a second shot to finish the job. It continues to open fire on the Russian position, with explosions and flames seen in the footage as smoke rises into the air.

Release of the footage comes as Russian forces pounded targets in eastern and southern Ukraine with missiles, drones and artillery, and as Moscow continues to hurl what is left of its offensive power at the city of Bakhmut. 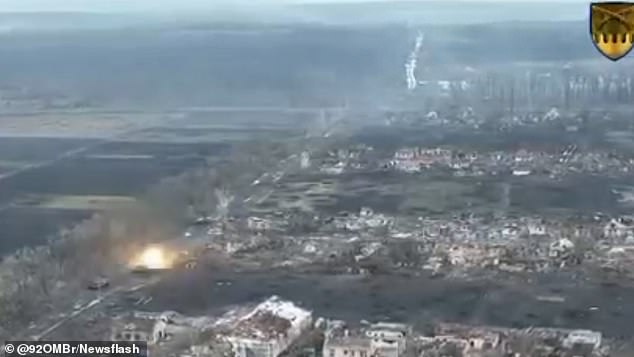 Pictured: This is the moment Ukrainian forces destroyed a Russian T-73 in a tank duel

The images of the life-or-death tank battled were obtained from the 92nd Separate Mechanized Brigade on Sunday, December 11.

Along with the video, the unit released a statement celebrating the victory, saying: ‘Tank crew T-64BV, the famous 92 Separate Mechanized Brigade, entered a tank duel against a Russian T-72B3. Ukrainian tankers proved who is the boss in Ukraine!

‘From the first shot, the enemy tank turned into scrap metal. Glory to Ukraine and to the tank troops! Victory is ours!’ the statement added.

The footage, captured on a drone overlooking an unknown battlefield, shows the Ukrainian tank rolling down a road strewn with wreckage, that has a row of leafless tress and bombed-out fields to its left, and destroyed buildings to its right.

Suddenly, while still moving, a flash of an explosion is seen from the Ukrainian T-64’s barrel, as its operators fire a round straight ahead down the road. 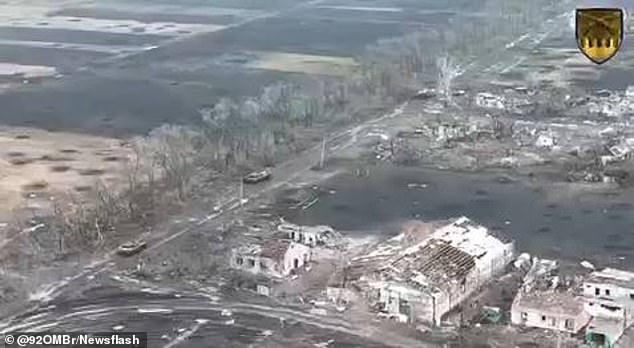 The footage, captured on a drone overlooking an unknown battlefield, shows the Ukrainian tank (left) rolling down a road strewn with wreckage, that has a row of leafless tress and bombed-out fields to its left, and destroyed buildings to its right 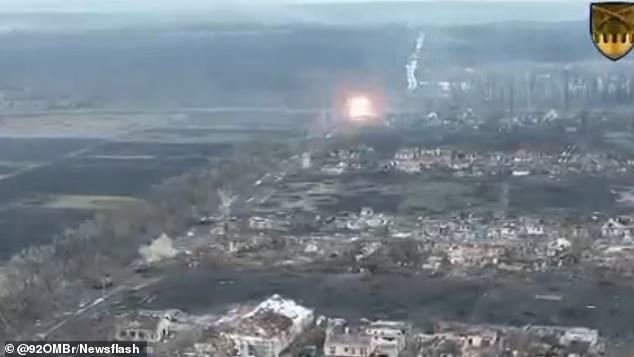 The tank (left) is seen suddenly firing a round down the road, striking a Russia T-73 a split-second later. Drone footage shows the moment the Russian tank erupted into flames 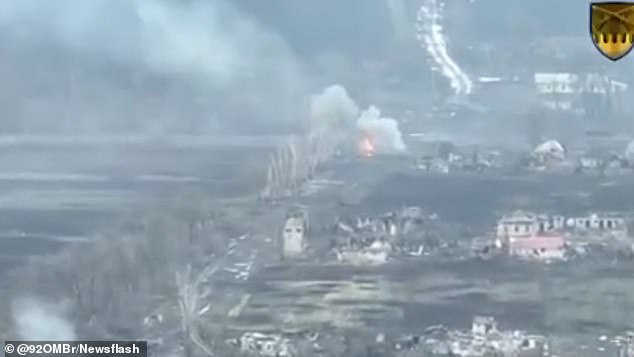 Picturd: A thick plume of smoke rises from the Russian tank over the battlefield 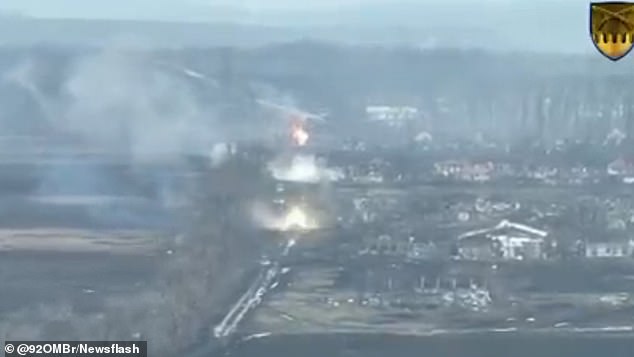 Pictured: The camera pans around so that it is looking over the Ukrainian tank and down the road. The T-64 fires yet another round at the target, which is still in flames

A split-second later hundreds of feet up the road, a second explosion is seen as the round slams into the Russian T-73, which erupts into flames.

As a thick plume of smoke rises above the battlefield, the Ukrainian military vehicle firs another round – again striking the same target.

The camera pans around so that it is looking over the Ukrainian tank and down the road. The T-64 fires yet another round at the target, which is still in flames.

The dramatic footage was also relayed by the Office of Strategic Communications (StratCom) of the Armed Forces of Ukraine along with a statement confirming the tank battle, saying: ‘A T-64 destroyed a Russian T-73 with a direct shot.

‘The video explains why the tank is such a formidable weapon. The projectile flies in an almost straight trajectory.

Kyiv’s military officials did not reveal where the battle took place, but its release comes amid heavy fighting around the eastern city of Bakhmut in Donetsk Oblast. 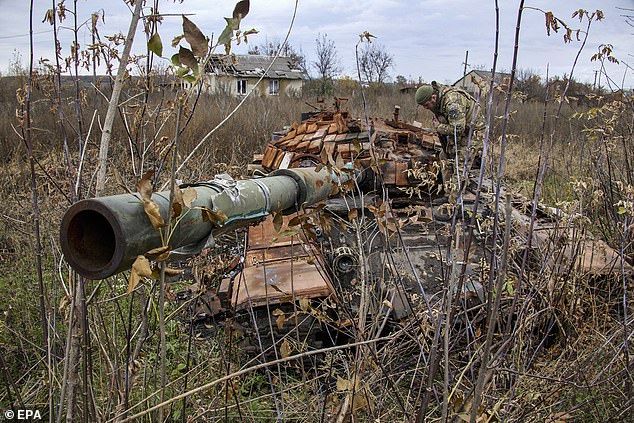 A serviceman of a Ukrainian National Guard examines destroyed tank at an undisclosed location in the Kharkiv region, northeastern Ukraine, October 25, 2022

For months, Russian forces have attacked the city of Bakhmut with frontal assaults, artillery barrages and air strikes in a stubborn battle for a settlement deemed strategically irrelevant by many observers.

As Russia continues to hurl what is left of its offensive power at entrenched Ukrainian positions in and around the city, experts have wondered whether the losses in manpower and equipment will match the potential prize.

‘We are scratching our heads,’ a Western official told AFP last week when asked about Russia’s focus on Bakhmut. ‘We don’t know the answer.’

Nonetheless, they have pushed forward. Russia on Monday kept up its attacks on Bakhmut, which is now largely in ruins, Avdiivka, and Lyman, and launched two missile strikes against civilian infrastructure in Kostyantynivka.

All four are in the Donetsk region – one of four that Moscow claims to have annexed from Ukraine after ‘referendums’ branded illegal by Kyiv.

Elsewhere, Russian forces carried out more than 60 attacks from rocket salvo systems targeting the civilian infrastructure in Kherson, the southern city liberated by Ukrainian forces last month, and Ukrainian troops based there.

Ukraine also attacked a barracks in the Russian-occupied city of Melitopol, in the Zaporizhzhia region of south-eastern Ukraine, over the weekend.

A local leader also claimed that Ukrainian forces have attacked a hotel where members of Russia’s brutal private Wagner military group were based, killing many.

Serhiy Haidai, the Governor-in-exile of the Luhansk region in eastern Ukraine, said that Ukrainian forces hit the headquarters of Russia’s Wagner mercenary group.

Ukrainian sources have said that there have been numerous Russian casualties as a result, with witnesses saying that they heard 10 explosions during the attack, which was reportedly carried out using HIMARS rockets. The strikes on the city were reportedly part of a wider wave of attacks on several Russian bases.

The General Staff of the Armed Forces of Ukraine reported that between February 24 and December 12, Russia had lost about 94,760 personnel and 2,966 tanks.