‘Under the carpet’: Council secretly votes to exit aged care

Whitehorse City Council in Melbourne’s east is the latest to pull out of in-home aged care, with the council voting at a confidential meeting to stop providing the service.

The council voted to exit the services from July at an October meeting that was closed to the public. As the meeting was “in camera”, there was no reference to the decision or explanation of it in the council’s minutes of the meeting. 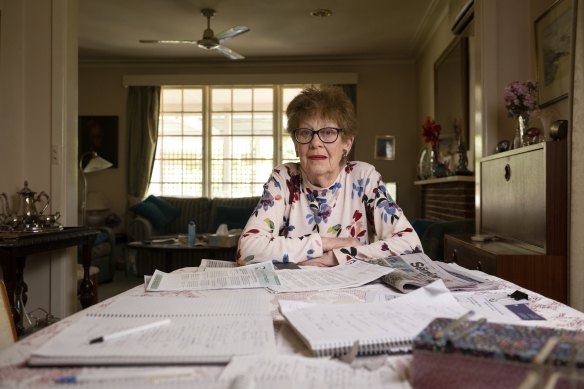 The decision, which affects about 2500 elderly residents and 190 staff, follows Boroondara and Mornington councils’ outsourcing of in-home aged care services to private providers last year. Those moves left thousands of elderly people without care while private providers worked to take over.

Whitehorse residents only found out when they received a letter from the council after the decision was made.

Desley Conroy, 86, said she was “ropeable” when she opened the envelope and discovered her in-home care would no longer be provided by the council, but would instead be through a private provider.

“It is unfair and unjust and it is ageist,” she said. “Because of my age, I’m 86, I’m not worthy of making my own decisions about who my provider is.

“I am being told, ‘Well sorry you don’t have any rights to this, Madam’.

“I think it is sexist as well because the majority of people in the older age groups are female.”

Conroy said such an important decision that affected so many residents should not have been made behind closed doors.

“When I first got the letter from the council I was really angry as it seemed to be very quiet and under the carpet,” she said. “It seemed to me to be very suspicious. I don’t even know which way my local councillor voted.”

Whitehorse expects to save $5 million a year by abolishing the services and relying on the federal government to engage private providers instead.

The council, which takes in Blackburn, Mitcham, Forest Hill, Surrey Hills, Box Hill, Nunawading, Vermont and Burwood, has an ageing population with 24 per cent of residents over the age of 60.

A spokeswoman for Whitehorse defended the council’s decision to hold the meeting in camera.

Mornington’s decision last year was also made at a confidential meeting.

Carol Williams, founder of advocacy group Elder Care Watch, said the council’s failure to disclose its decision until it was too late to do anything about it was “at best disappointing and at worst disturbing”.

She said the decision on whether home care was continued or abandoned could still have been debated in public, even if commercial arrangements were not.

“The Local Government Act emphasises transparency but when you come to specific examples of vitally important decisions you find that transparency is a mirage,” she said.

Williams said she was concerned about the state of mind among highly dependent recipients of care.

“They are in the dark and the anecdotal word around the place is that there is a lot of distressed people,” she said.

“People have no reason to feel comfortable about Whitehorse given what has happened in other cases of privatisation.

“The sad thing is that it is a very successful service. Whitehorse’s services are very highly regarded.”

“Things are happening and residents don’t know about it,” she said. “This is such an important issue as everyone who gets older will be affected by it. Why is there secrecy when it affects so many people?”

A spokesman for the federal government said the circumstances in Boroondara and Mornington where elderly residents were left without care were different to those in Whitehorse.

“Nevertheless, the department continues to review and improve its processes to better support both relinquishing providers and incoming providers,” he said.

“The department recently engaged with councils about the future of in‑home care, reinforcing the messaging the Australian government wants to retain a diverse and high-quality market for aged care services. Not-for-profit and government delivered services will continue to play an essential role in aged care into the future.”