The University of East Anglia (UEA) is offering its students a ‘mindfulness’ course to help ease their ‘eco-anxiety’ – a condition that scientists say is spreading fast among the world’s younger population.

The course of six sessions, one per week and each lasting two hours, will begin on Wednesday after being developed together with mental health charity Norfolk and Waveney Mind.

The university said that eco-anxiety was a ‘direct result of the feelings of grief and distress stemming from the knowledge of climate concerns and its psychological impact’.

A UEA spokesperson said that ‘more widespread support for eco-anxiety has been developed in response to local needs in Norfolk, where people are becoming acutely conscious of rising sea levels as local coastal communities experience dramatic coastal erosion’.

Claire Pratt, associate director of student services at UEA, said: ‘We know that eco-anxiety is a massive issue for our students today, and so we wanted to get involved and do something to tackle these feelings.’

She said that she hoped the course could help students to ‘feel better about climate anxiety and provide a supportive atmosphere for discussion and mindfulness’. 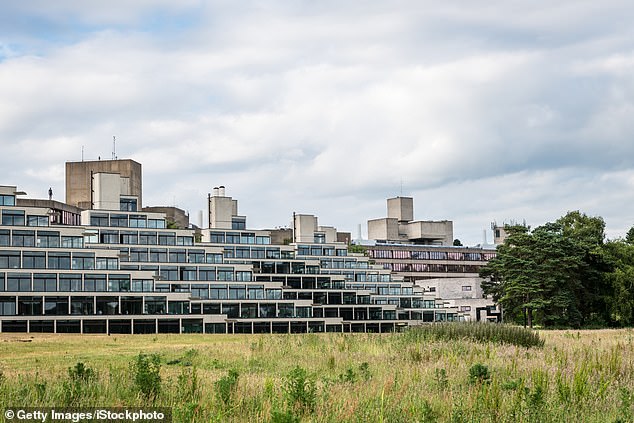 The course of six sessions, one per week and each lasting two hours, is being launched at the University of East Anglia (UEA) and was developed together with mental health charity Norfolk and Waveney Mind (Pictured: UEA campus) 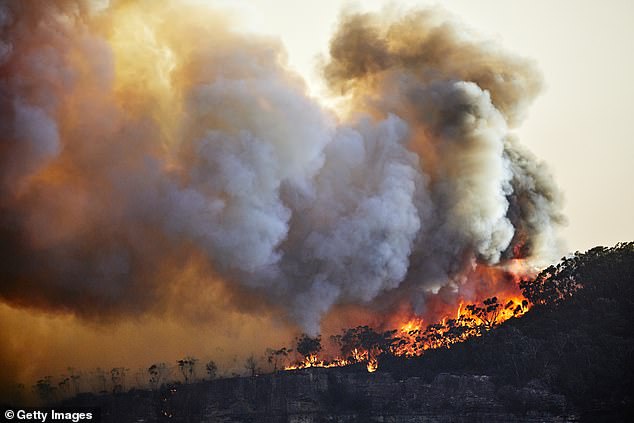 It comes after a study published in The Lancet last year declared climate anxiety a ‘widespread’ condition among children and young people around the world (Pictured: An out of control bushfire in Australia) 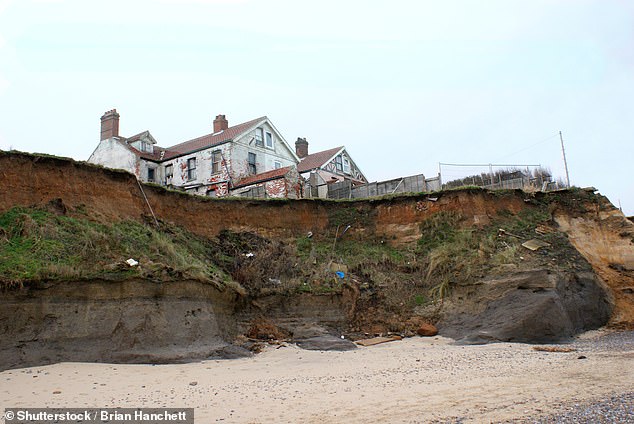 Norfolk is one of Britain’s most affected areas when it comes to coastal erosion caused by climate change, with Happisburgh (pictured) topping the list of the most at risk towns in the UK

UEA post-graduate student Azza Dirar, who helped design the Mindfulness and Active Hope course, said: ‘The focus is not on the overwhelming bleak evidence of climate change and environmental degradation, but rather on how we can act with courage and wisdom during a time of looming ecological and societal collapse.’

‘But there are many things we can do to increase our emotional resilience and keep a helpful and engaged perspective on the crisis.’

The course ‘combines aspects of mindfulness and the Active Hope model – taken from the best-selling book of the same name by Joanna Macy and Chris Johnstone – to offer support around climate anxiety and eco-grief’, the UEA said.

UEA is hosting the first of the sessions on Wednesday this week.

It comes after a study published in The Lancet last year declared climate anxiety a ‘widespread’ condition among children and young people around the world.

The study spoke to 10,000 citizens aged 16 to 25 in the UK, Australia, Brazil, Finland, France, India, Nigeria, Philippines, Portugal, and the US.

The research found that 59 per cent of young people were ‘extremely worried’, while 84 per cent were at least ‘moderately worried’, with more than half reporting feeling ‘sad, anxious, powerless, helpless and guilty.’

Just under half (45 per cent) said their feelings about climate change ‘negatively affected their daily life and functioning.’

The authors of the study wrote: ‘A perceived failure by governments to respond to the climate crisis is associated with increased distress. 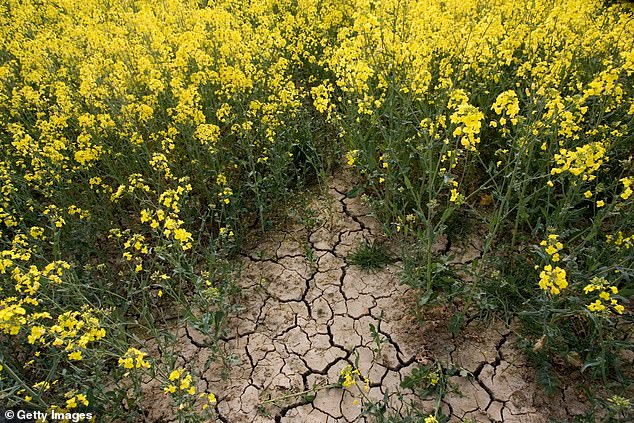 The university said that eco-anxiety was a ‘direct result of the feelings of grief and distress stemming from the knowledge of climate concerns and its psychological impact’ (Pictured: Cracked earth in the Cotswolds following drought this year)

‘There is an urgent need for further research into the emotional impact of climate change on children and young people and for governments to validate their distress by taking urgent action on climate change.’

The UEA’s eco-anxiety course comes more than a decade after it was embroiled in the so-called Climategate scandal.

In November 2009, hackers accessed thousands of emails and documents from the university’s Climate Research Unit (CRU), just weeks before the Copenhagen Summit on climate change.

Climate change denialists pounced on the emails and claimed they showed that scientists were manipulating data in an attempt to suppress critics. The CRU rejected this and said the emails had been taken out of context.

A series of investigations was launched in what was described as ‘one of the most rigorous scrutiny processes in UK academic history’. The claims against the scientists were found to be were false, and the emails to have been ‘misrepresented’.

Norfolk is one of Britain’s most affected areas when it comes to coastal erosion caused by climate change, with Happisburgh topping the list of the most at risk towns in the UK.

WHICH PARTS OF THE ENGLISH COASTLINE WILL BE THE WORST HIT BY EROSION?

Figures published in 2019 by confused.com, based on data collected by the Environmental Agency’s National Coastal Erosion Risk Mapping project, suggest the following areas of England’s coastline will be the worst hit by erosion:

Home to around 900 people, houses in Happisburgh that were once 20ft from the sea are now on a cliff edge. The village has lost at least 35 homes to erosion over the past two decades.

Figures published in 2019 by confused.com, based on data collected by the Environmental Agency’s National Coastal Erosion Risk Mapping project, also show that Kessingland in Suffolk, Hornsea and Withernsea in Yorkshire and Camber in East Sussex are likely to suffer the most coastal erosion over the next 20 years.

Experts found that the east coast is being hardest hit by erosion, with the rate the fastest in Yorkshire and the Humber, where 56 per cent of the coastline is at risk.

Sea levels around the UK have risen by 15.4cm since 1900, and the Met Office predicts modern levels could increase a further 1.12m by 2100, threatening communities on sea cliffs and coastal floodplains around much of the east and south coast of England.

Professor Andrew Shepherd, director of the Centre for Polar Observation and Modelling at the University of Leeds, warned this summer: ‘With every centimetre of sea level rise, 2 to 3 million more people worldwide experience coastal flooding each year.

‘In the UK alone, a million citizens will be exposed to annual flooding by the end of this century, and so its right to start a planned retreat from the most vulnerable parts of our shoreline.’

Professor Jim Hall, of the University of Oxford, added: ‘The Environment Agency is recognising that the coast is inevitably going to be impacted by sea level rise.

‘Even if the Environment Agency could afford to build coast protection everywhere – which they cannot – the things that many people cherish about the coast, like beaches and sand dunes, will eventually become submerged, unless we start to plan now for how the coastline can adjust to rising sea levels.

‘There need to be honest conversations within coastal communities about what the future holds, and a strategic approach to deciding how to manage the coast sustainably in the future.’