London: The Queen’s home videos are to be broadcast to the nation for the first time, as she gives permission for rare private moments of her as a smitten young princess to be seen.

The footage, found in more than 400 reels of film, shows the Queen as a young woman, at the heart of a happy family before the weight of her public responsibility took hold. 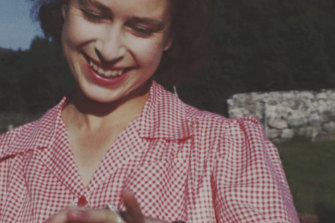 The then Princess Elizabeth shows off her new engagement ring soon after Prince Philip’s marriage proposal at Balmoral in 1946, in an image taken from “Elizabeth: The Unseen Queen”.Credit:AP

It includes scenes of her gazing at an engagement ring just given to her by Prince Philip, before news of their betrothal was shared with the waiting world. The films, described as “unseen, private home movies”, will be broadcast for the first time later this month by the BBC as part of its Platinum Jubilee coverage.

Elizabeth: The Unseen Queen will “offer audiences the chance to witness rare private moments from the monarch’s life”, the British broadcaster said, “telling the real story of her life as a princess – through her own eyes and in her own words from across her reign”.

It will be narrated largely by the Queen herself, using clips and newsreel from her speeches to explain what viewers are seeing.

The 75-minute programme includes footage of the baby Princess Elizabeth being pushed in a pram by her mother, through to her Coronation in 1953 at the age of 27.

The videos are believed to have been filmed by the royal family, firstly by the Queen’s parents and later the Duke of Edinburgh.

They will show scenes of her first tour abroad, to South Africa when she was 20, and footage of her with her Uncle George, the Duke of Kent who died in 1942.

The programme also has scenes showing the princess at Balmoral in 1946, admiring the engagement ring Prince Philip had designed for her using diamonds from a tiara given to him by his mother, Princess Alice.

It also shows them sharing their private joy with King George VI and Queen Elizabeth during Philip’s first extended stay with them in Scotland. 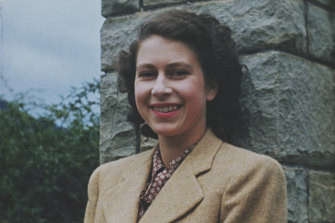 The 20-year-old Princess Elizabeth on a visit to South Africa in 1947.Credit:AP

Later, Princess Elizabeth will be seen as a young mother, spending time with the King and Queen in their new roles as “fond grandparents” to Prince Charles and Princess Anne.

Other footage from Balmoral, taken in 1951, captures the King’s final visit there before his death, while home reels show the Queen’s grandfather George V – known to her as “Grandpa England” – sailing off the Isle of Wight in 1931.

The BBC said the Queen had granted “unprecedented access” to the videos, “taking us inside Her Majesty’s life as never before through home movies shot by her, her parents, Prince Philip, and others”. In viewing more than 400 reels of film, producers also discovered lost footage from behind the scenes at state events, believed to have been commissioned by the royal family.

They also listened to more than 300 of the Queen’s speeches across eight decades of public life. 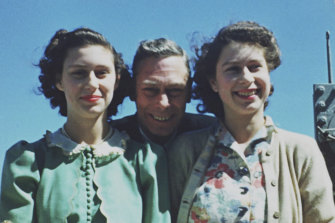 Princess Margaret and Princess Elizabeth with their father King George VI onboard HMS Vanguard in 1947, in footage from the new documentary.Credit:AP

In common with all royal videos since the 1920s, the recordings had been stored in the Royal Collection vaults of the British Film Institute.

Claire Popplewell, creative director for BBC Studios events productions, said: “The production team were under no illusion quite how special having access to this very personal archive was.

“Being able to draw upon the self-recorded history of a young Princess Elizabeth and her wider family – and allowing the Queen to tell us her own story – is the very heart of this film.”

Simon Young, the BBC’s commissioning editor for history, added: “This documentary is an extraordinary glimpse into a deeply personal side of the royal family that is rarely seen, and it’s wonderful to be able to share it with the nation as we mark her Platinum Jubilee.”

The documentary will air in Britain on May 29. Broadcast details in Australia are yet to be announced.