The United States reported more than 2 million coronavirus cases in one week, breaking yet another record as the omicron variant surges across the country.

The 2.49 million COVID-19 cases within the past week outpaced the previous record of 1.7 million cases from Jan. 3-9, 2021, according to a USA TODAY analysis of Johns Hopkins data.

The entirety of November had just 2.55 million cases, the analysis shows.

The U.S. recorded 647,067 million cases Thursday; more than 2 million were notched in the last four days.

With both the omicron and delta variants infecting people, the U.S. is now averaging about 356,000 cases per day – and more than four cases every second.

One of every 10 counties set a record for cases in the week ending Thursday, the analysis shows. U.S. cases are now being reported 95% faster than they were just a week earlier.

Globally, cases are up 61% over the previous week and are approaching 14 cases per second. The global tally has nearly doubled in just two weeks.

The U.S. weekly death count, however, isn't approaching record levels. The most deaths recorded in a single week was 23,415 during the period of Jan. 10-16 of this year. There have been 10,823 reported deaths in the past week.

The relatively low number of deaths in contrast to high case counts may support early evidence that omicron is more contagious but less severe.

Also in the news:

► The Food and Drug Administration is expected to broaden eligibility soon for COVID-19 booster shots to allow children ages 12 to 15 to get an extra dose, the New York Times and NBC News reported.

► More than 2,800 U.S. flights have been canceled Friday, according to FlightAware, which tracks flight status in real-time. There have been more than 9,000 cancellations since Christmas Eve, mostly because of staffing issues tied to COVID-19, airlines have said.

► About 1 in 15 people in London were likely to test positive for the coronavirus in the week before Christmas, new data from Britain's Office for National Statistics showed Friday. Throughout all of England, about 1 in 25 were likely positive, or about 2 million people.

► New Mexico is running short of free at-home rapid tests to detect COVID-19 infections as the state struggles with the spread of the omicron variant.

📈Today's numbers: The U.S. has recorded more than 54.2 million confirmed COVID-19 cases and more than 824,000 deaths, according to Johns Hopkins University data. Global totals: More than 286.5 million cases and 5.4 million deaths. More than 205.8 million Americans – 62% – are fully vaccinated, according to the CDC.

📘 What we're reading: Rapid tests, lots of rapid tests: How US schools plan to reopen amid omicron-fueled COVID surge. Read the full story.

Keep refreshing this page for the latest news. Want more? Sign up for USA TODAY's free Coronavirus Watch newsletter to receive updates directly to your inbox and join our Facebook group. 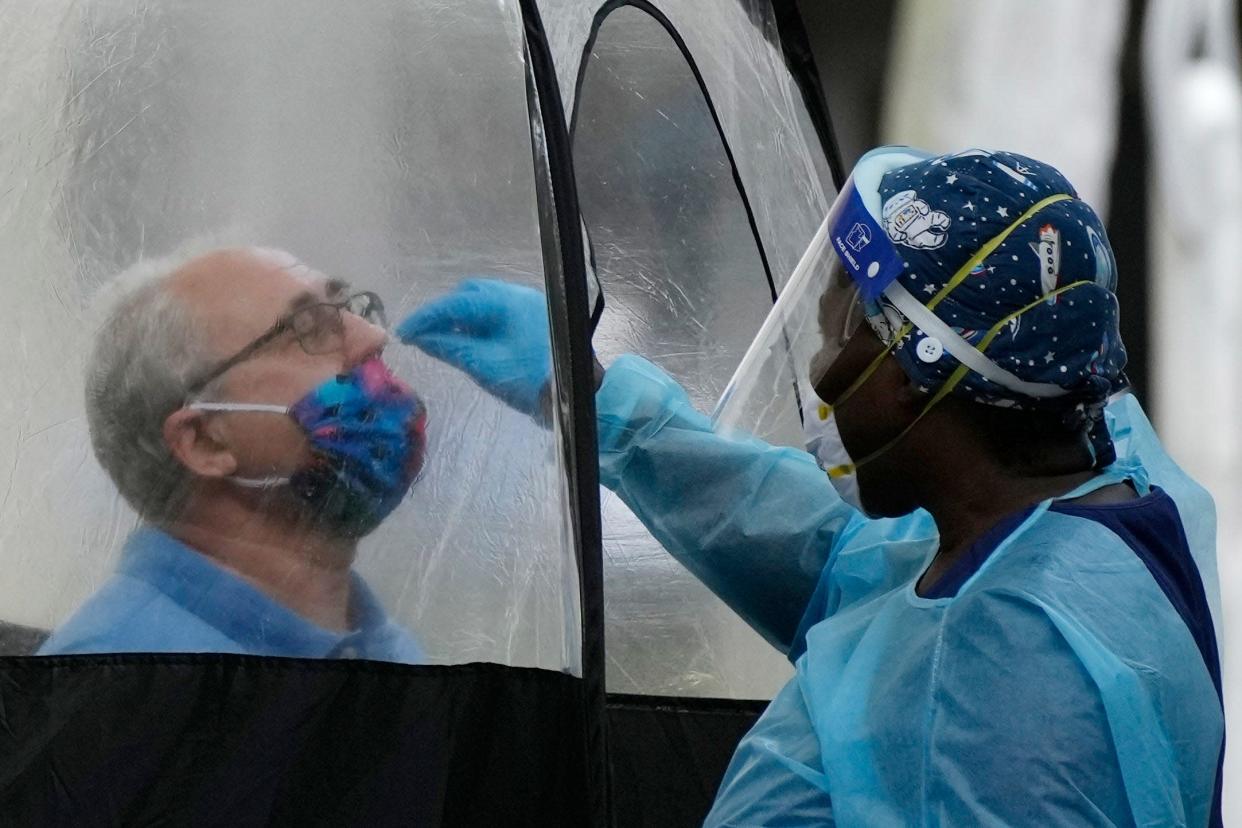 Despite record numbers of COVID-19 cases across the city and nationwide, New York City is forging ahead with modified plans for its annual New Year's Eve ball drop in Times Square on Friday.

"We want to show that we’re moving forward, and we want to show the world that New York City is fighting our way through this," Mayor Bill de Blasio said in a Thursday interview with the TODAY Show.

In 2020, revelers were banned from the celebration as a result of the pandemic, and only a few essential workers, media members and police were at Times Square as the ball dropped.

This year, the city will require those who attend to show proof of vaccination and photo ID and to wear masks. The event normally hosts 58,000 people, but this year will be limited to about 15,000 attendees and won't allow entry until 3 p.m. ET, de Blasio said last week.

A new South African study found that hospitalized patients during the omicron surge were far less likely to have severe illness or die.

Compared to South Africa's coronavirus waves in summer 2020, winter 2020 and spring 2021, the newest wave of the virus, which coincided with the identification of omicron, saw fewer severe cases and deaths.

Seventy-four percent of hospitalized patients required oxygen therapy during the delta variant's wave in South Africa. That number has dropped to 17.6% amid omicron. The median length of stay in the hospital prior to omicron was seven to eight days – it’s since dropped to three days.

The death rate of hospitalized COVID-19 patients in South Africa during the delta wave was 29.1%. Omicron’s is 2.7%.

Because omicron is so incredibly contagious, some medical experts say its peak isn't likely to last long. It's already burned through South Africa since it was first identified the day before Thanksgiving and cases are falling there.

US children hospitalized with COVID-19 in record numbers

The omicron-fueled surge that is sending COVID-19 cases skyrocketing across the U.S. is putting children in the hospital in record numbers, and experts lament that most of the youngsters are not vaccinated.

“It’s just so heartbreaking,” said Dr. Paul Offit, an infectious-disease expert at Children’s Hospital of Philadelphia. "It was hard enough last year, but now you know that you have a way to prevent all this.”

During the week of Dec. 22-28, an average of 378 children 17 and under were admitted per day to hospitals with the coronavirus, a 66% increase from the week before, the Centers for Disease Control and Prevention reported Thursday.

The previous high over the course of the pandemic was in early September, when child hospitalizations averaged 342 per day, the CDC said.

On a more hopeful note, children continue to represent a small percentage of those being hospitalized with COVID-19: An average of nearly 10,200 people of all ages were admitted per day during the same week in December. And many doctors say the youngsters seem less sick than those who came in during the delta surge over the summer.

Tested positive for COVID during the holidays? Here's what to do.

Testing positive for COVID-19 starts a confusing, disruptive and at times frightening process – one that millions of Americans will likely go through in the coming week.

First, you need to isolate. That’s a more intense version of quarantining – it means cutting off contact with other people as much as possible so you reduce the chance of infecting them. This also means forgoing travel, not going to work and even limiting contact with people in your own household who aren't infected.

The CDC says isolating is a necessary step whether you’re vaccinated or unvaccinated, and whether you have symptoms or feel fine.

Everyone who tests positive for COVID-19 should monitor their symptoms. And people who are unvaccinated or at high risk for severe disease should be extra-vigilant for symptoms that might require emergency care. Call your doctor for early treatment options.

How long should you isolate? How long will I be contagious? What if you are in close contact with someone who tested positive? Here’s what you should know about omicron and COVID-19 this holiday season.

This article originally appeared on USA TODAY: COVID-19 news: US surpasses 2 million cases in one week for first time