Tatt’s Amore! US tourist on sightseeing tour of Britain gets souvenir tattoo of Uncle Joe’s Mint Balls… to remember her dream visit to Wigan sweet factory

An American tourist on a sightseeing tour of the UK has had a tattoo inked on her arm to commemorate her dream visit… to Wigan’s Mint Balls factory.

Kristi Kimmel, 48, underwent the needle to get the iconic image after touring Uncle Joe’s Mint Balls sweet factory, in the Greater Manchester town, ahead of other tourist attractions like the Angel of the North, York Minster and Liverpool’s Albert Dock.

The sleeve tattoo is now taking pride of place on her right arm alongside other inkings representing people near and dear to her.

Uncle Joes’s Mint Balls was established in Wigan 1898 by William Santus and ownership has been passed down through the family generations and is currently owned by the founder’s great nephews.

Mrs Kimmel from Frederick, Maryland said: ‘We came to visit friends in Wigan and my friend, Alice Kinley, took me to a sweet shop. The bright red Uncle Joe’s tin with a smiling man drew me in. I picked it up and said: “I’m getting this”.

‘She told me that they are made in Wigan, and Wigan is known around the world for this candy. She went on to say that they’ve been around over 100 years. That made me love them even more.’ 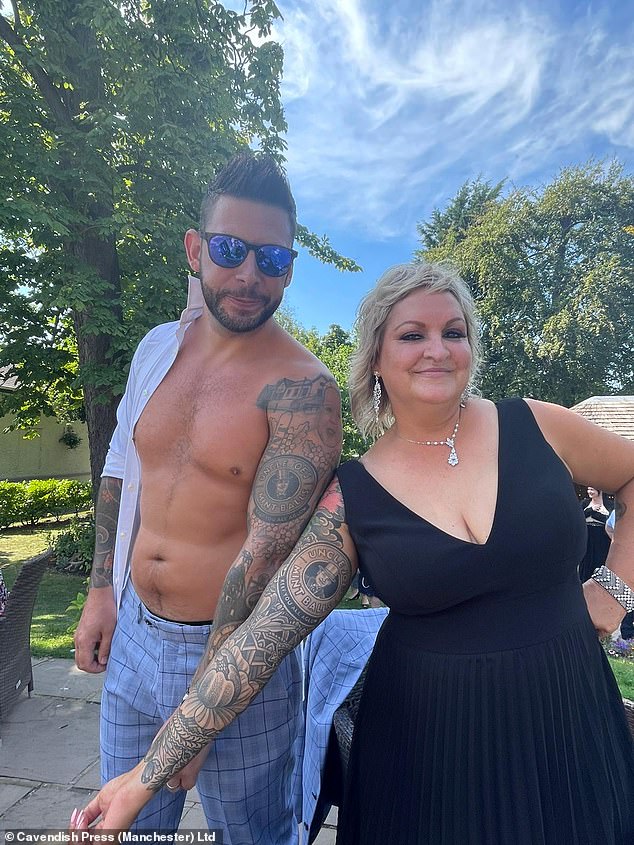 American tourist Kristi Kimmel (right), 48, on a sightseeing tour of the UK has had a tattoo inked on her arm to commemorate her dream holiday… to Wigan 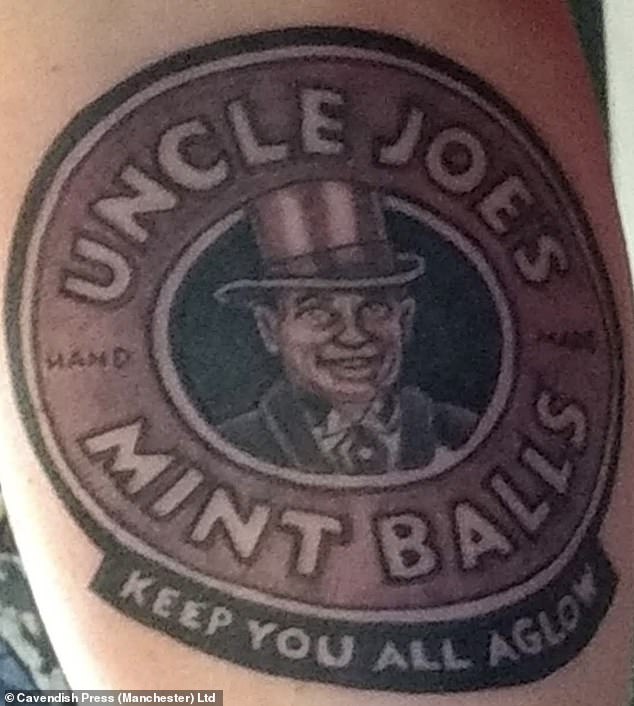 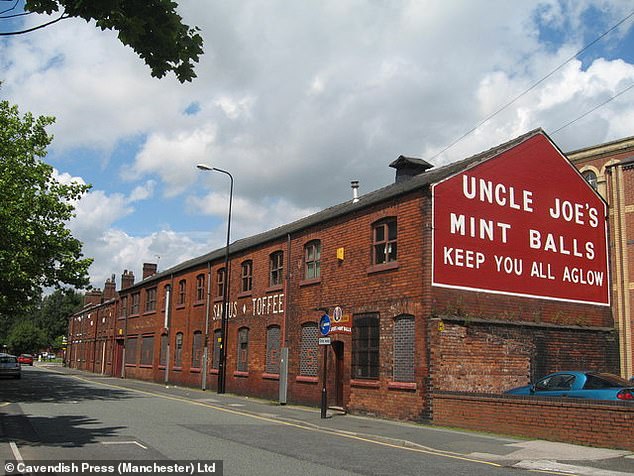 Uncle Joe’s Mint Balls was  established in Wigan 1898 by William Santus and ownership has been passed down through the family generations and is currently owned by John and Antony Winnard, Mr Williams’s great nephews. Pictured: Uncle Joe’s sweet factory in Wigan, Greater Manchester

She added: ‘When we came home, I put that happy tin with all my memories on a shelf in my kitchen where I could see it every day. People would ask about it and I enjoyed telling the story.

‘When I decided to start a sleeve tattoo I wanted to include things that mean a lot to me. I got the idea to include something to represent Wigan and our treasured friends and Uncle Joe’s Mint Balls was perfect.

‘I told Alice my idea and she said her nephew had a similar tattoo.’

She has three stars representing her husband Rick and two sons, a puzzle piece for her youngest son who has autism and peonies for her mother who passed away 10 years ago.

Her Little Prince tattoo, reminds her of her son’s journey with autism, and a chameleon symbolizes her ability to change.

Kristi has travelled to California and across America and has also been to the Dominican Republic and Morocco, but Wigan is the only place represented on her tattoo.

On her last visit to Wigan, last month, she went to take pictures of the Uncle Joe’s factory and was invited inside for a tour.

When staff found out about her tattoo she was presented with an Uncle Joe’s T-shirt and a small book telling the story of how the sweets were first made and how the company has grown.

Kristi said: ‘I brought home a bunch of tins. I put one on my station at work and can now tell the incredible story of going to the factory and meeting everyone. There are many great places in the world but Wigan is a wonderful town.’

The former cotton and mining town is usually known for Wigan Pier and the DW Stadium which is home to Wigan Athletic Football Club and Wigan Warriors Rugby League Football Club. On her last visit to Wigan, last month, Mrs Kimmel went to take pictures of the Uncle Joe’s factory and was invited inside for a tour 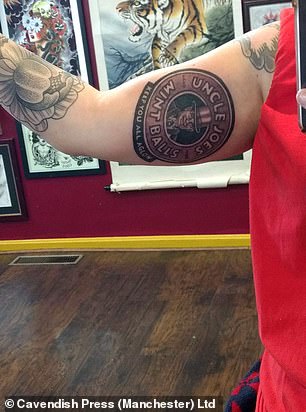 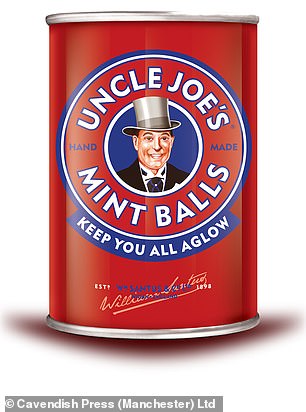 A perfect likeness: Kristi Kimmel’s tattoo of the Uncle Joe’s logo in the tattoo parlour after being inked (left) against a tub of the traditional Mint Balls (right), which are manufactured in Wigan 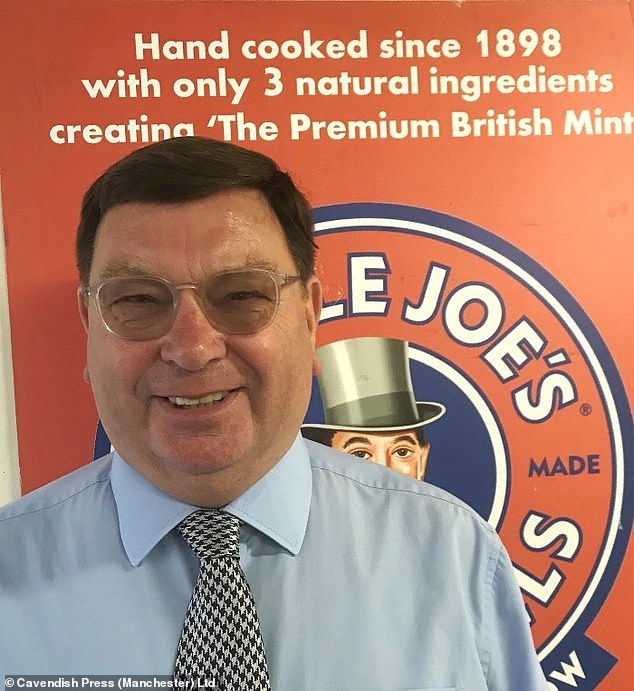 In a statement Joint Managing Directors of Uncle Joe’s, John Winnard MBE and Antony Winnard, said: ‘We were delighted to find out why Kristi wanted to visit our factory and honoured that she chose our logo to represent the warm and friendly welcomed which she received in Wigan.

‘The town is sometimes looked upon unfavourably, usually by people who have never been, but we think it is the best place in the world. We’re simply delighted Kirsti agrees.’

Uncle Joe’s Mint Balls are made by Wigan-based William Santus and Co Ltd, a privately-owned traditional sweet company that was established in 1898.

The ownership has been passed down through the family generations and joint Managing Directors John Winnard MBE and Antony Winnard are the great, great nephews of the company’s founder.

The Mint Balls are still manufactured using the same traditional methods as when Mrs Santus originally made the sweets in her kitchen in 1898.