A deadbeat Utah dad, who beat his wife to death in front of their daughters on a cruise ship off Southeast Alaska in 2017 after she told him she wanted a divorce, received a 30-year prison sentence Thursday.

Kenneth Manzanares, 43, pleaded guilty last year to second-degree murder in connection with Kristy Manzanares’ slaying aboard the Emerald Princess in U.S. territorial waters, according to Acting U.S. Attorney for the District of Alaska Bryan Wilson.

The couple got into an argument in front of their daughters in the cabin of their cruise ship on July 25, 2017, according to prosecutors. Kristy Manzanares told her husband she wanted a divorce and that he should get off the cruise when the ship reached Juneau.

Kenneth Manzanares ordered his daughters to leave the room, prosecutors said. But after the girls heard their mother scream, they tried to re-enter. 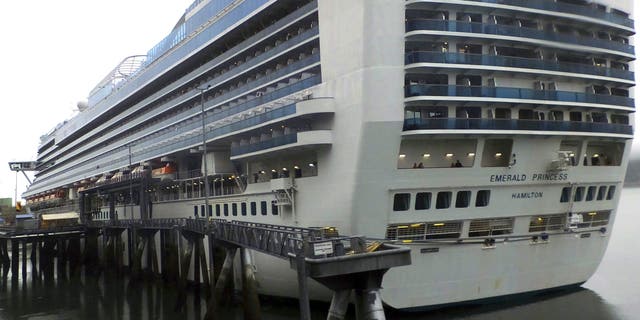 This file photo shows the Emerald Princess cruise ship docked in Juneau, Alaska. A federal judge on Thursday, June 3, 2021, in Juneau, Alaska, sentenced Kenneth Manzanares charged with first-degree murder to 30 years in prison for the beating death of his wife, Kristy Manzanares while aboard the ship.
(AP Photo/Becky Bohrer, File)

With the door locked, they went around via a connected balcony and witnessed their father “straddling Kristy on the bed, striking her in the head with closed fists.”

Then he allegedly tried to throw her body overboard before his in-laws broke into the room, and one of them stopped him.

Kristy Manzanares’ died from her injuries.

“[She] had a severe head wound, and blood was spread throughout the room on multiple surfaces,” according to an FBI arrest affidavit.

The victim’s brother-in-law, identified in court documents as D.H., found Kenneth Manzanares with bloody hands and Kristy Manzanares covered in blood on the floor, according to an FBI affidavit.

“She would not stop laughing at me,” Manzanares allegedly told D.H.

Authorities ruled the cause of death blunt force trauma to the head and face.

“In 2017, Kenneth Manzanares brutally murdered his wife Kristy Manzanares while on an Alaskan cruise with their three daughters and extended family members,” Wilson said in a statement. “This was not a random act of violence but a chilling neglect for human life.”

Robert Britt, the special agent in charge of the FBI’s Anchorage Field Office, described the victim as “a beloved mother, daughter, sister and friend.”

“While justice has now been served, the lasting impact and trauma this man inflicted on Kristy’s family can never be erased,” he said. “Our thoughts are with Kristy’s family and her home community.”

His, man, murdered, utah, Who, wife
You may also like: