Uvalde, Texas: Even as bullets whizzed around him, Daniel and his classmates stayed quiet.

As a gunman stormed his primary school, firing hundreds of rounds into a handful of classrooms, Daniel and the others huddled together silently, praying for help. They watched as their teacher rushed to lock their classroom door before the shooter, Salvador Rolando Ramos, reached them.

Daniel saw the Ramos approach the window of his classroom’s door and then shoot through the glass, striking his teacher in the leg. Another bullet ricocheted off a wall and hit a student in the nose. She had been crouched down a few feet away from him. 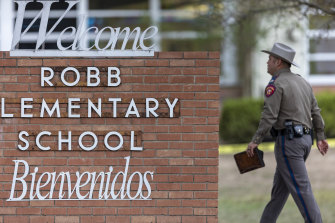 A state trooper walks past the Robb Elementary School sign in Uvalde, Texas.Credit:AP

Still, no one screamed. For more than an hour while he waited to be rescued, Daniel heard only occasional sobbing and hushed instructions from his injured teacher to stay quiet.

“I was scared and nervous, because the bullets almost hit me,” said Daniel, who is being identified only by his first name because he is a minor. “Some of us, the ones thinking he could see us, they acted like we got shot and stuff. They were playing dead.”

In an interviewed authorised by his mother, Daniel provided an account of survival, saying he wanted to highlight the heroism of the students in his year four class. Daniel said his classroom was one of a handful the gunman fired into on Tuesday, and he believes quick action by his teacher saved his life. At a news conference this week, officials said the bulk of the deaths and injuries occurred in rooms 111 and 112. Daniel was hiding in room 109. 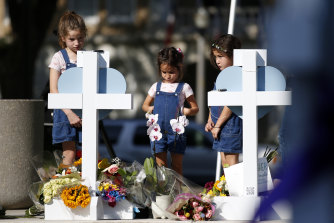 Children pay their respects at a memorial site for the victims killed in this week’s elementary school shooting in Uvalde, Texas, on Thursday.Credit:AP Photo/Dario Lopez-Mills

Daniel’s mother, Briana Ruiz, agreed to let her son be interviewed because she wanted the world to know the Uvalde students face an agonising journey as they struggle to recover from the tragedy. (Ruiz and her son do not have the same last name.)

Since police rescued him by breaking out the classroom windows and having him crawl through glass to safety, Daniel has been awakened by nightmares. He refuses to play to his beloved video games and mostly stays quiet. His favourite cousin, and 10 other close friends, are among those who were killed earlier this week.

“The child that made it home, thankfully they are here. But mentally and emotionally, a piece of that child that left their home that morning never came back with them,” said Ruiz, 31, a former teacher’s aide at Robb Elementary School. “They are traumatised, and they have to deal with it for the rest of their lives.”

Daniel’s terrifying day began just minutes after his class completed an awards ceremony marking the end of the school year.

As they were returning to their classroom, Daniel heard gunshots coming from the hallway near a back door that the gunman apparently used to enter the building. Immediately, Daniel said, his teacher rushed to the door and inserted a key, apparently breaking it in such a way that door jammed, he said.

The teacher also turned off the lights and urged her students to dive under their desks or crawl into the corner.

“We just ran to get to cover,” Daniel said. “And [the teacher] grabbed the key, and it broke and just jammed” in the door.

Crouched under a classroom table, Daniel could see his classroom door.

Initially, Daniel said he could hear the gunman firing on another classroom at the end of a hallway. Ruiz said there are about eight classrooms in that wing of the school, but several were probably unoccupied because students were at lunch or in gym class.

Then, Daniel said, he could hear the gunman make his way down the hall, firing into another classroom.

About 15 minutes after the shooting began, Daniel said he saw the gunman approach his classroom door.

The gunman initially tugged at the door handle but was apparently unable to open it. Daniel also told his mother that Ramos made mocking hand gestures toward the students in his classroom.

Then Ramos fired through the door’s glass window and into Daniel’s classroom.

Daniel described the bullets as being “hot” as they bounced around the classroom. A fragment of one of those bullets slammed into his classmate’s nose. Daniel was close enough to hear the “crunching” sound as it struck the student.

During the gunfire, Daniel’s teacher was shot twice but survived.

On Wednesday, Texas law enforcement officials said it took about an hour for police officers to find and shoot the gunman and rescue the students. Daniel believes it took about 2 hours for his classroom to be evacuated.

While they waited for help, Daniel said heard his injured classmate softly ask the teacher to “call 911” because she “was bleeding a lot.” But for much of the time, Daniel said the injured student neither cried nor spoke.

Daniel’s teacher, meanwhile, was lying on the floor where she had been shot.

“She had some blood on her, but she was like whispering, ‘Stay calm. Stay where you are. Don’t move,’ ” Daniel recalled.

He said that some students whispered back to the teacher asking if she was okay.

But most of the time, the students just did what the teacher asked them to do. They stayed quiet.

Ruiz, meanwhile, faced her own nightmare outside of the school.

When she was a teacher’s aide, Ruiz also worked at the junior high school. During the 2014-2015 school year, Ruiz said Ramos, the alleged gunman, was in her class.

The morning of the shooting, Ruiz attended Daniel’s awards ceremony at Robb Elementary School. She had just driven away from the school when she got a phone call from her father alerting her about a disturbance at the school.

As she stood outside the school, Ruiz and other parents were confused as to why police officers at the scene were not entering the building to confront the gunman. She watched panicked fathers attempt to tear down a fence to enter the school to rescue their children. Ruiz and other mothers started screaming at anyone they could find, demanding answers about what was going on inside the school.

“I kept telling them, ‘That is his building. That is his building,’” Ruiz said as she saw officers start aiming their weapons at the section of the school that included Daniel’s classroom. “All I kept thinking is I should have just brought him home with me” after the awards ceremony.

Over the next hour, Ruiz watched as students in other sections of the school either fled or were evacuated to safety by police. But Daniel’s cousin never emerged.

Meanwhile, inside the school, Daniel said eventually the gunman stopped firing his weapons. Daniel thinks the gunman hid in a nearby classroom until police arrived.

“We could hear a cop telling him to come out and stuff,” Daniel said. “We heard the cop say put your handgun down, and put the rest of your guns down, and come out of the classroom.”

“We could hear the shooter say something in Spanish,” Daniel added. “And then we heard like two gun shots, and the cop calling for backup to get us out to safety.”

After the gunman was shot and killed by police, Daniel said police officers were also unable to open the door that his teacher had jammed with the key. Officers then broke out the windows in the room so Daniel and his classmates could crawl outside, leaving shards of glass in the palm of their hands.

Daniel watched as police also broke the windows out of the neighbouring classroom.

But Daniel said only four students crawled out, his first sign that his cousin, 9-year-old Ellie Garcia, did not survive. Ruiz said Daniel often stood up for Ellie when she was bullied at school, and now he feels guilty that he survived but she did not.

By telling his story to a reporter, Ruiz hopes that it will make Daniel feel comfortable talking about his feelings with a psychologist. At a news conference Friday, Abbott promised that anyone in Uvalde will be able to receive free mental health services.

Since Tuesday, Ruiz said Daniel sleeps in her bed and wakes up with nightmares.

On Wednesday night, Ruiz and Daniel sat down and looked at the photos of all the students who died that day. Daniel pointed to photographs of one of his best friends and nine other friends who were among the victims.

Even though Daniel lives in a cramped trailer with his sister and brother, Ruiz said he has yet to set foot in the room that contains his gaming equipment. His two favourite video games used to be “Fortnite” and “War Game.”

Asked why he no longer plays his video games, Daniel dropped his head and said, “I don’t like the gunshots and stuff.”

Yet despite his trauma, Ruiz is confident Daniel will grow up knowing that he is also a hero.

“He feels that his friends and his classmates, at that moment, were being very brave even as they were so scared,” Ruiz said. “He kept saying, ‘We did good, mom. We did good. We stayed quiet.’”