Vaccination delays cause new anguish for Australians with family overseas

Sydney academic Jake Olivier is worried sick that his mother in New Orleans will lose her battle with cancer before he and his son Declan get to say goodbye in person because overseas travel has now been pushed back due to vaccine delays.

Dr Olivier’s wife, Dr Melissa Norberg, is the deputy director of Macquarie University’s centre for emotional health and works in mental health. She is under 50 and her doctor did not feel the benefits of the vaccine outweighed the risks given there are so few COVID-19 cases in Australia. 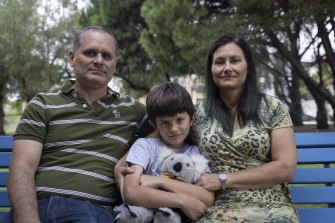 Dr Olivier’s mother, Mary Lou Olivier, 70, was diagnosed with breast and kidney cancer more than seven years ago in the United States.

“They didn’t get it all and it spread to her liver and caused spots on her lungs,” he said. “She still has some quality time and it would be nice if I could spend it with her.”

Dr Olivier, a mathematician and statistician at the University of NSW, said FaceTime had helped them to stay in touch but it wasn’t the same as seeing her in person. “We haven’t been able to visit. I’m worried sick she will pass and I won’t be able to say goodbye.”

Dr Olivier’s case illustrates the huge amount of uncertainty now hanging over families with friends and relatives overseas as a result of further delays to the vaccine rollout in Australia.

The nation’s borders have been effectively sealed for more than a year and Prime Minister Scott Morrison said on Friday that further easing of domestic restrictions would occur “on the basis of international borders remaining substantively closed” for the foreseeable future.

On Friday, the Morrison government announced it had secured another 20 million Pfizer vaccine doses that will arrive in the final quarter of 2021, for a total of 40 million Pfizer doses.

The extra capacity comes after the government decided to make Pfizer the preferred vaccine for people aged under 50 when medical experts expressed concerns about rare blood clots potentially linked to the AstraZeneca vaccine.

That prompted NSW to temporarily stop AstraZeneca vaccinations for under 50s on Friday but it later resumed for those who wanted it and had been informed of the associated risks.

Many foreigners living in Australia, or people with dual citizenship such as the Oliviers, are grateful that Australia has done so well in keeping COVID-19 numbers below those of other countries. So is Rhiannon Veness, 31, of Albury.

But she is sad and worried that further delays mean she won’t get to see her mother in Florida, who has lived in isolation for more than a year to protect her health. “Hopefully, we can go back next year. This year is probably a bit of a write-off,” she said.

Ms Veness said her mother’s health was vulnerable. “She hasn’t left the house other than for absolute necessities for more than 12 months,” Ms Veness said.

Her mother sounded depressed, she was fearful of getting sick from COVID-19 and was sad that she was approaching another birthday alone and so far from her daughter in Australia.

Ms Veness is a dual citizen who was born in Australia and lived in the US until she returned to Australia 11 years ago. She said she felt “pulled between two worlds. I get homesick all the time but this is home too”.

Ms Veness said she “had never stopped being grateful for living in Australia. I’d rather there be a cautious approach to the vaccines. COVID is a serious illness, but I don’t think the end should justify the means. If there is a safer vaccine, we should be doing everything we can to make sure we are giving our people the safest vaccine possible.”

Dr Olivier now doubts he will be vaccinated in time to see his mother again. Leaving the country without it and getting vaccinated in the US raised other questions.

“It’s tricky,” he says. “I am pretty sure I could leave, but would I be allowed to come back in? If I did get the vaccine, would Australia be OK with that? Would I still require quarantine?”

The US has had an estimated 30 million cases of COVID-19, with nearly 600,000 deaths. But its vaccination rate has been greater than that of many countries, including Australia.

Nearly 40 per cent of its population has been given at least one dose of a vaccine, compared with fewer than a million doses in Australia.

a, Cause, delays, New, vaccination
You may also like: