New York: Abbigail Bugenske, 22, had all but forgotten about her long-shot bid to become Ohio’s next millionaire.

As the clock inched toward 7.20pm on Wednesday, US time, the state was preparing to announce the winner of its first lottery drawing for vaccinated Ohioans live on television. Bugenske was driving from Cincinnati to her parents’ house near Cleveland when she got a call that left her in hysterics. The governor was on the line. She had just won $US1 million ($1.29 million).

“I thought it was a prank call initially,” said Bugenske, who soon saw an explosion of messages on her phone that confirmed the news. She walked into her parents’ house in disbelief. 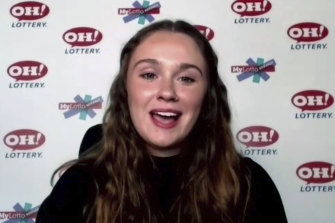 “I was screaming enough that my parents thought that I was crying and that something was wrong,” she recalled Thursday. “I started yelling that I won a million dollars and I was going to be a millionaire.”

Bugenske, who graduated from college last year and recently moved to the Cincinnati area to take a job as an engineer, won the money through Ohio’s new lottery offering $US1 million to people who have gotten at least one shot of a coronavirus vaccine. The idea, which has drawn both enthusiasm and scrutiny, is gaining traction across the country, as states such as Colorado, Maryland and Oregon offer similar incentives in an effort to boost waning vaccinations. 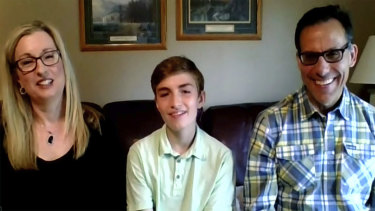 His mother, Colleen Costello, who entered her family into the lottery, recalled how she had joked with her colleagues over lunch that her life could dramatically change if she or a family member won. The chemical engineer, soon forgot about the drawing and was leaving the office when she got a call from Governor Mike DeWine.

“My first reaction was, I thought maybe I was listening to your voice and it was a taped message,” she told the governor at a news conference. “The more we talked, the more we realised, it was really you, live. I was really thankful at that moment that there was a bench nearby because I needed to sit down.”

Her husband, Rich Costello, who works as a teacher, was at a coffee shop doing school work when his wife called and asked if he was sitting down. He hurried to pick up his son from youth group, but kept the news a secret until they got home, where the governor, his wife and members of the governor’s staff planned to visit.

“We were riding home, and I said, ‘Joe, it’s good news, but no questions’,” Costello said. “Just look out the window.” 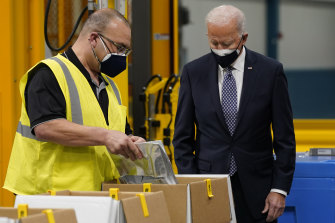 US President Joe Biden tours a Pfizer plant in Michigan. The country’s vaccine rollout is proceeding at a staggering pace – nearly 40 per cent of the population is already fully vaccinated.Credit:AP

A member of the governor’s office broke the news to Joseph in the family’s driveway, his parents recalled, and later, they visited with the governor, their family and neighbours in their front lawn in the Dayton suburbs.

Colleen Costello said that she and her husband had intended to have their children vaccinated against COVID-19 vaccine, but the lottery accelerated their plans. Joseph, who became eligible for a vaccine in the 12 to 15-year-old age group earlier this month, received his shot Saturday, and Colleen Costello entered the family Sunday, before a midnight deadline.

Joseph, who just finished year 8 and is enjoying the first days of his vacation, said he was still deciding what he might study. On his list of potential colleges: Ohio State University.

As for Bugenske, she said she had no plans to quit her day job. She hopes to donate some money and invest the rest. But there is one thing she might like to buy. When she got the call from the governor, she was on her way to northeast Ohio, with the hopes of looking at a used car.

“I think buying a used car is still in my future,” she said.