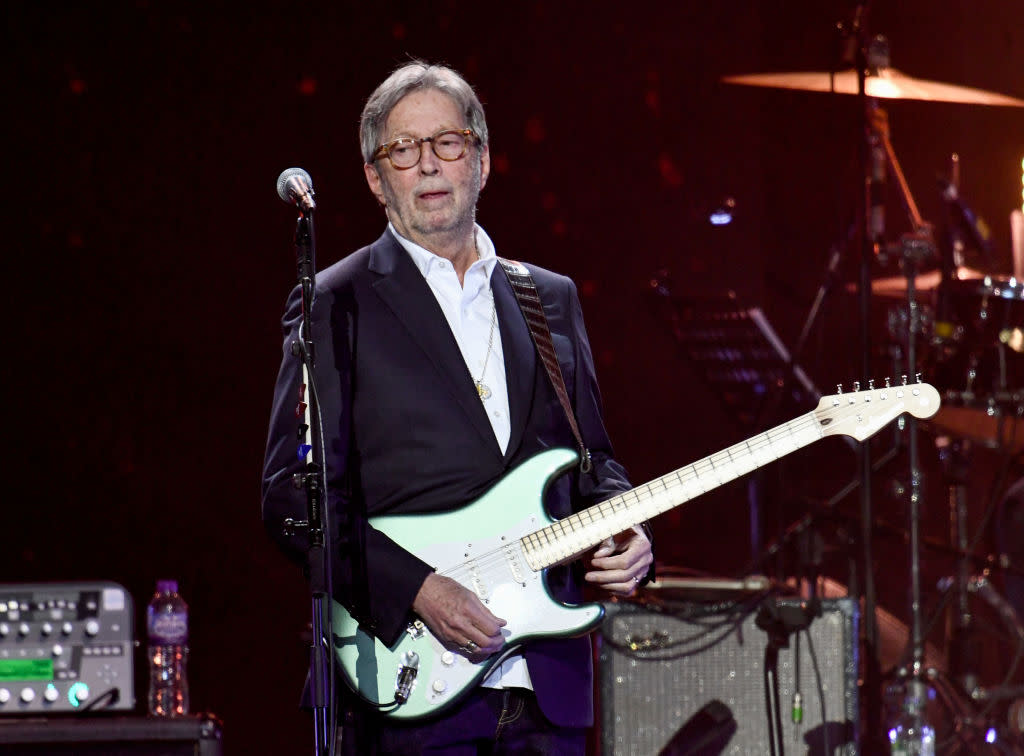 Eric Clapton, who has spoken against COVID-19 vaccines, even saying that he would not play at venues that required them, and sang on songs against lockdown, including "Stand and Deliver" with Van Morrison, has tested positive for the virus.

The development came "shortly after the second concert at [London's] Royal Albert Hall" on May 8.

The Rock and Roll Hall of Famer has postponed shows in Zurich and Milan to recover and avoid passing it on to others. According to an announcement on Facebook, the "Layla" artist hopes to be able to perform again by Friday, when he's scheduled to take the stage in Bologna, Italy.

"Eric Clapton is unfortunately suffering from Covid having tested positive shortly after the second concert at the Royal Albert Hall. He has been told by his medical advisors that if he were to resume traveling and performing too soon, it could substantially delay his full recovery," the announcement read. "Eric is also anxious to avoid passing on any infection to any of his band, crew, Promoters, their staff and of course the fans. So, after intensive internal discussion, it has been decided with great regret and apologies to all those concerned to postpone the performances in Zurich on 17th May and Milan on 18th May, the present hope being to be able to resume the tour starting with the concerts in Bologna on 20th and 21st May."

Clapton's statement noted that this is his first bout with the coronavirus.

"It is very frustrating that having avoided Covid throughout lockdown and throughout the period when travel restrictions have been in place Eric should have succumbed to Covid at this point in time, but we very much hope he will be sufficiently recovered by the end of the week to be able to perform the remainder of the planned performances. A further announcement will be made concerning the rescheduling of the postponed shows once suitable dates can be identified. The shows are due to be rescheduled within the next 6 months and tickets purchased will remain valid for the new rescheduled date."

Clapton is vaccinated. However, in May 2021, he said he's had a "disastrous" reaction to two AstraZeneca shots in a letter published in Rolling Stone. "My hands and feet were either frozen, numb or burning, and pretty much useless for two weeks," the former Cream guitarist wrote. "I feared I would never play again, (I suffer with peripheral neuropathy and should never have gone near the needle.) But the propaganda said the vaccine was safe for everyone."

Last summer, the 77-year-old Brit said that he wouldn't play places that required proof of vaccine, two days after U.K. Prime Minister Boris Johnson said venues would instate such a mandate. The same music magazine reported in September that he'd crossed that line, though, by playing the Smoothie King Center in New Orleans.

The Centers for Disease Control and Prevention maintains that vaccines are safe and effective, and help protect people from becoming more seriously ill or dying if they are infected. The government agency reported Monday that 257.9 million people have received at least one dose of the FDA-approved vaccines.