The president of one of Spain’s main tourist regions has called for post-Brexit visa rules limiting the amount of time Brits can spend in the country to be scrapped.

Ximo Puig, president of the Valencia region where Benidorm and Alicante are located, issued the call after a huge drop-off in tourist numbers after Brexit.

He said the new rules – which limit Brits to a 90-day stay in every 180 days – are putting people off buying holiday homes, visiting their families and damaging the region’s economy. 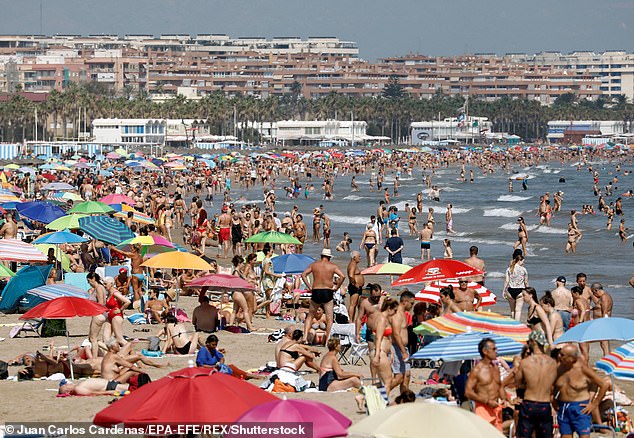 Speaking at a tourism expo in London this week, he called for ‘Brexit to be as Brexit-less as possible’.

Reyes Maroto, Spain’s tourism minister, assured Mr Puig that a task force including diplomats from both the UK and Spain has already been set up.

The embassy teams have been told to work towards ‘joint solutions’ on ‘mobility’ issues, she said – without elaborating further.

Mr Puig issued his demand after the number of Britons visiting his region plunged post-Brexit, from 3million in 2019 to just 600,000 in 2020.

While the pandemic will be behind most of the decrease, Puig warned that it is unlikely figures will return to pre-pandemic levels due to Brexit travel restrictions.

Puig said he is particularly concerned about the effect of the new rules on retirees who own or were planning to buy holiday homes in the region.

Limiting the amount of time they can stay in the country may put people off buying or else convince those who have bought to sell up, Puig said according to The Local, potentially causing prices to crash.

While the new rules do not affect the 380,000 Britons who hold full residency in Spain, Puig fears they will affect hundreds of thousands more people – including the families of those residents –  who do not qualify for the same status.

Carlos Mazón, president of Alicante’s tourism board, described British visitors as a ‘fundamental’ source of wealth for the region at the London expo

‘We are working on reciprocity so that they can also be in our territory for six months in a row when they come to visit us, as these are the conditions that apply for people from Alicante and Spain when they visit the United Kingdom,’ he said.

However, it is not clear exactly how Spain would do this. As a Shengen Zone country, its border policies are dictated by common EU treaties.

While states within Shengen do have the power to set some of their own border rules, this is generally only used in times of emergency – such as during Covid.

All, Be, Brits, to, Valencia, wants
You may also like: