A vegan restaurant has decided to put meat on the menu after being hit by the cost of living crisis – angering many customers who are ‘saddened’ by the change.

The Mango Tree in Taunton, Somerset, closed its doors on Saturday to undergo renovations including an updated menu which will include meat.

They are not the only vegan restaurant to struggle in recent years due to a lack of uptake, but those who loved the plant-based values have hit out saying ‘selling meat is worse than closing’.

The restaurant, however, insisted they were left with ‘no choice’ and said: ‘The only other option was to close permanently.

‘Ethics extend to the jobs and welfare of our wonderful team, to whom we owe a great deal, and another chance.’ 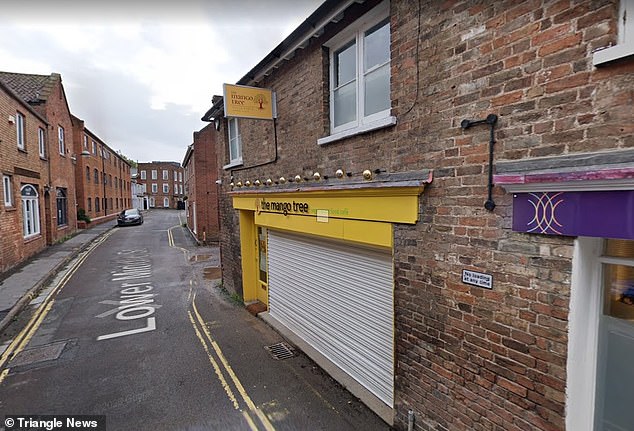 The Mango Tree in Taunton, Somerset, has temporarily shut its doors to customers as renovations take place – they’ll be back in the autumn with a new menu selling meat 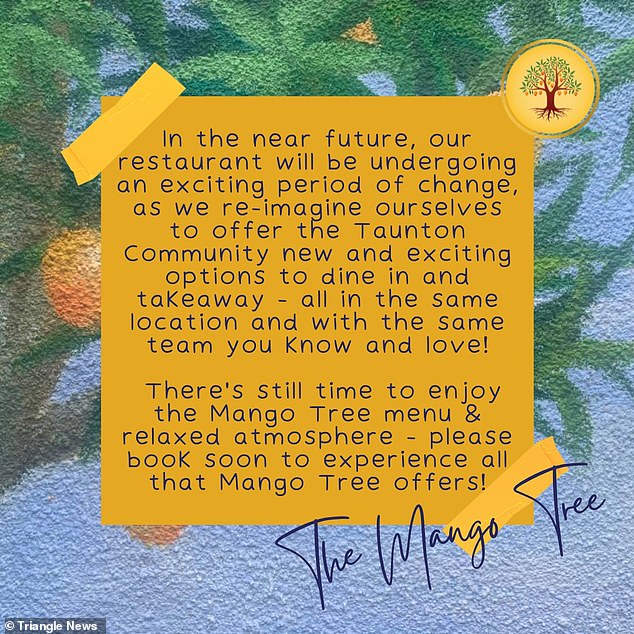 The restaurant announced: ‘In the near future our restaurant will be undergoing an exciting period of change as we re-imagine ourselves to offer the Taunton Community new and exciting options to dine in and takeaway.

‘All in the same location and with the same team you know and love.

‘In the new restaurant we will be serving a variety of dishes to accommodate a wide variety of dietary needs and preferences.

‘Hospitality is increasingly tough and continuing as a purely vegan restaurant has not been sustainable for a considerable amount of time as not enough customers supported us.

‘The changes will allow us to secure the jobs of our wonderful team and allow us to continue offering Taunton delicious plant based dishes that would otherwise have disappeared.’

But the change did not go down well with vegan customers who said they’re likely to lose their clientele.

One person said: ‘I see that you are including meat based dishes. I echo the sadness of others who have commented.

‘Perhaps shaking up the menu, which has, as previously mentioned, remained the same for the past few years, would have ensured repeat business from customers who valued the Mango Tree and its ethos, but I guess if it’s not run by ethical vegans then remaining a veggie/vegan restaurant isn’t the priority.’

Most of the commentators were not so sympathetic to the restaurant’s struggles, hitting out at the decision to sell meat rather than solely plant based meals

Another added: ‘I loved coming here for its authenticity and plant based values. It justified the high prices. But now they’re turning away from vegan values, they’ll be like every other restaurant and more expensive, so I shall not be returning.’

And another said: ‘This is a massive shame.

‘It’s been amazing to have a 100% vegan restaurant in Taunton.

‘Veganism isn’t a business venture. It’s an ethical philosophy that does the best for the animals, the planet, and public health.’

Yet another critic responded: ‘I’m very saddened to hear this as someone who put so much energy into your restaurant I understand entirely why you are doing this but from a vegan standpoint I would see this as unethical practice.’

‘Seems like they’re likely to lose a lot of their original vegan clientele and probably not gain that many more close-minded omnivores they’re targeting as they’re so closely associated with plant-based,’ another added. 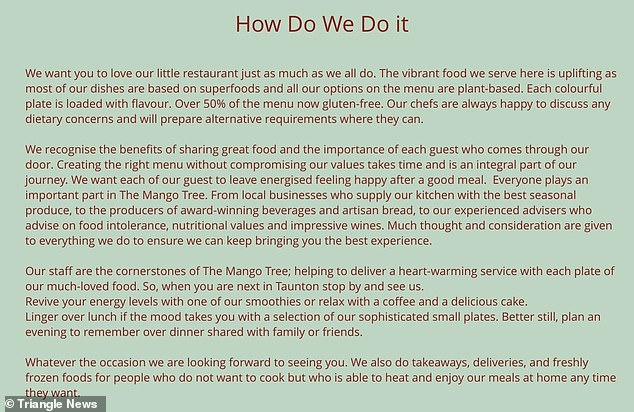 The Mango Tree said they could not get enough customers visiting them in the current format, so changes are being made to stay open

In reply, the restaurant said: ‘Despite lots of marketing, many special offers, offering dine in and takeaway, introducing the use of home delivery partners, and working incredibly hard to be as efficient as possible, not enough of the local population used us regularly enough to make continuing in the current format sustainable.

‘We must move on with positivity and are determined to do so.’

The restaurant will reopen this autumn with no fixed date announced yet.

It comes after a host of trendy vegan restaurants were forced to shut in recent years due to a lack of customers.

Another vegan restaurant, 1847 in Manchester, closed down three months ago after nine years.