Victoria recorded 733 new coronavirus cases and one death on Friday, as fears increase that a protest in Melbourne’s CBD could be a superspreader event after an attendee tested positive for COVID-19.

There were 41,029 vaccination doses administered on Thursday, while more than 56,500 people were tested for COVID-19. Victoria now has 7160 active cases. 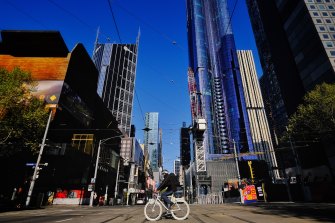 The figures come after it was revealed a person who attended the anti-lockdown and anti-vaccination protest in Melbourne’s CBD on Wednesday is now in hospital being treated for COVID-19.

A spokesperson for the Department of Health said public health investigations were underway into the positive case. The person has been included in today’s case numbers.

“We are urging protesters to get tested should they experience COVID-like symptoms, no matter how mild,” the spokesperson for the department said.

The positive case comes after a vaccination hub run by cohealth at the Melbourne Town Hall was closed until Monday, after staff in the CBD were abused on their way to work.

The community health operator’s chief executive, Nicole Bartholomeusz, said staff had now been instructed not to wear their uniforms, lanyards, or scrubs in the city to avoid being targeted.

“I am distressed to report that there have been several incidents of cohealth workers in the city being physically and verbally abused while on their way to work, targeted because they were wearing their cohealth identification,” she said in a statement.

“There have been some disgraceful scenes, particularly at the Shrine – deeply disturbing and deeply upsetting and deeply offensive,” he said. 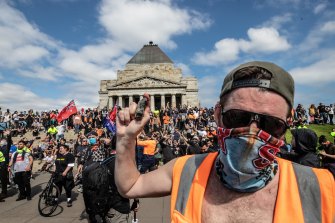 Thousands of people angry about vaccinations and Lockdowns shut down parts of the city and descended on the Shrine of Remembrance before being forced out by riot police. Credit:Jason South

“We respect freedom of speech but equally there are things we must deeply respect and the desecration of the Shrine of Remembrance is truly sickening.”

“There have been some disgraceful scenes, particularly at the Shrine – deeply disturbing and deeply upsetting and deeply offensive.”

A primary school in Melbourne’s western suburbs and a childcare centre in Melbourne’s north are the latest tier-1 coronavirus exposure sites listed by the Department of Health.

Sunshine North Primary School was listed as a tier-1 exposure site on September 15, meaning that any students, staff or parents who attended the school will need to isolate for 14 days and get tested immediately.

Joybelle Childcare Cente Fawkner, in Melbourne’s northern suburbs, has also been listed as a tier-1 exposure site on September 17.

Other tier-1 exposure sites listed last night include Prestige Tyre and Auto Service in Roxburgh Park, which was visited by COVID-positive person September 16 and 17.