More hotels will be contracted to house people in quarantine ahead of an expected jump in the number of Australians landing in Melbourne from next month.

The Age can reveal the Andrews government has asked the Hotel Grand Chancellor in Melbourne’s CBD, which has 160 rooms and operated as a quarantine hotel from July until the government stopped using it in October last year, to prepare to host quarantine guests again from next month.

A government spokeswoman confirmed details of the new hotels would be announced once plans to expand the international arrivals cap were finalised. 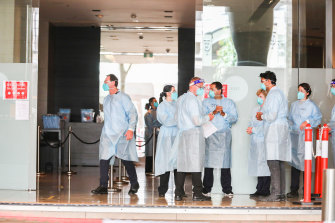 “The Victorian government is currently considering a range of options to expand mandatory quarantine – including new hotels – to allow more overseas Victorians to return home safely,” she said.

“The number of required sites will vary depending on whatever the new arrivals cap is set at, as well as individual building capacity.”

The preparations come as Premier Daniel Andrews on Friday announced a further easing of coronavirus restrictions, allowing up to 30 people to gather in homes from Saturday, double the previous limit of 15.

Victoria’s travel ban on nine of 10 local government areas in western Sydney previously deemed “red zones” has also been lifted, while Greater Brisbane has been upgraded to a “green zone” with no travel restrictions.

Victoria has been receiving 1120 Australians from overseas per week since its hotel quarantine program resumed on December 7, with more than 2200 people in hotels in Melbourne at any one time. 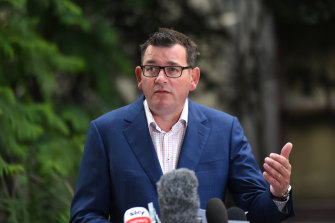 That number will likely increase significantly next month, around the same time a temporary 50 per cent cut on international arrivals in NSW, Western Australia and Queensland ends on February 15.

In a further boost for returning Australians, Emirates on Friday reversed its decision to cancel all services to Australia.

Victoria’s second wave of coronavirus was sparked by lapses in hotel quarantine where workers in two hotels contracted COVID-19 and spread it into the community, leading to months of tight restrictions and more than 800 deaths.

An inquiry into the program found serious, systemic problems with the Andrews government’s infection control and management in the hotels.

When the quarantine program restarted in December under newly created agency COVID-19 Quarantine Victoria, the state government contracted 11 hotels in the CBD and near Melbourne airport, including two “health” hotels for positive coronavirus cases.

The 39,000 Australians overseas who have registered an interest to fly home suffered a setback earlier this month when national cabinet halved arrivals caps, primarily to guard against the more infectious UK strain of COVID-19. 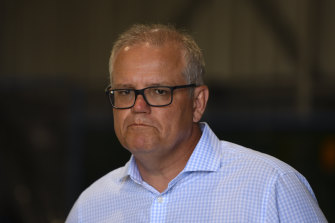 Prime Minister Scott Morrison reiterated on Friday that the caps would not increase before February 15 but said the topic would be a priority for discussions with premiers and chief ministers ahead of the next national cabinet meeting on February 5.

“Of course there is more [people trying to come home] given the deterioration of the situation around the world,” Mr Morrison said.

“Our first priority … is the health and safety within Australia, and then to seek to bring and support as many Australians seeking to come home as possible.”

In Victoria, three additional quarantine hotels are hosting about 1200 Australian Open players and officials until the end of the month.

The government views that program, paid for by Tennis Australia, as a dry run for boosting quarantine spaces, with hundreds of newly trained staff that will be able to work across other sites.

From next month, Victoria could return to similar quarantine numbers as May last year, when up to 16 hotels hosted more than 4000 people simultaneously, or about 2000 new arrivals per week. 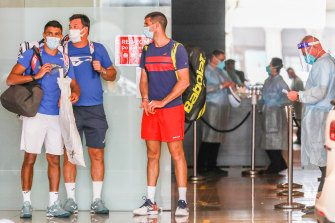 Australian Open players in front of the Grand Hyatt Melbourne, one of three hotels housing tennis players and officials.Credit:Getty

Melbourne’s hotels will soon receive about 330 Tasmanians currently overseas as part of an agreement where the southern state will in turn host 1500 seasonal workers from the Pacific Islands for Victoria.

Mr Andrews said other states “will be pleased to see us do more” once Victoria boosted its cap.

“We’re very confident we can do that but that’s not next week. That’ll be in coming weeks, and we’ll make announcements very soon about that,” he said on Thursday.

Domestically, only Cumberland council in western Sydney remains a “red zone” after Friday’s announcement. The rest of Greater Sydney is “orange”, meaning people entering Victoria must be tested within 72 hours and isolate until they receive a negative result.

Mr Andrews said: “That will be great news, I know, for people who are wanting to come home and, of course, those who, for whatever reason, need to travel into those communities.”

COVID-19 Quarantine Victoria came under fire for the first time since its creation this week when neighbours complained of discarded personal protective equipment on the street outside the View hotel on St Kilda Road.

Mr Andrews apologised on Thursday and said a late garbage truck had caused overflowing PPE bins to spill over in front of the hotel, which is hosting tennis players.

“They are now putting in place overflow arrangements, so if that is to happen again there would be additional storage capacity so that it could be stored safely,” he said.

“We don’t want to see that happen again and we apologise to local residents if there was any distress caused by it.”

Government contracts to enter the quarantine program are hotly contested among the hotel industry despite the risk of negative publicity if outbreaks occur.

The government pays a standard rate to book out the entire hotel, guaranteeing full occupancy on contracts up to 12 months at the same time hotels continue to suffer from international and interstate border closures.

Melbourne hotel occupancy was 35 per cent last week, a 10 per cent drop since Victoria introduced border closures on NSW from January 1 according to statistics from Accommodation Australia.

Prior to this month’s reductions, NSW was receiving 3000 returning travellers per week and Western Australia and Queensland about 1000.

Mr Morrison confirmed that hotel quarantine workers would be among the first to receive coronavirus vaccinations once they begin in February or early March.