Victoria is unlikely to reopen the border to NSW soon, despite both states recording few new coronavirus cases on Monday, as the Andrews government expresses "cautious optimism" that it has the Black Rock outbreak under control.

However, agricultural workers who are employed in both NSW and Victoria will now be able to work across the two states amid a labour shortage in the industry as a result of closed international borders. 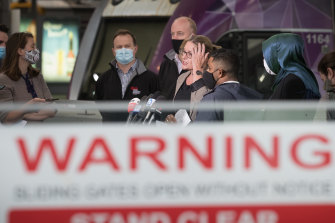 Acting Premier Jacinta Allan has warned Victoria will not make a snap decision to reopen its borders to New South Wales. Credit:Jason South

Victoria recorded three new locally acquired COVID-19 cases on Monday, all linked to the Black Rock cluster, and one case in hotel quarantine after 32,000 tests were processed. While NSW reported no new local cases up to 8pm on Sunday, two new cases have been detected since then.

"The clear plan is to get back to those zero days as quickly as possible and hold it there [before reopening the border with NSW]," Ms Allan said.

"That is also is not just dependent on the cases here in Victoria, it does depend on what's happening in other states, and that will also rely on Victorians continuing to get tested, continuing to follow the rules.

"There is a reason to be optimistic, but we do have to be cautious in our optimism … this is a dangerous and difficult virus, and it can move very, very quickly around our community."

The acting Premier did not say how long Victoria would need to record zero daily cases before the state changed its border restrictions, but urged people to continue monitoring for symptoms and getting tested.

Liberal MP David Davis derided Victoria's handling of the coronavirus outbreak, labelling the Andrews government's management as "chaotic, hopeless and incompetent" despite the lessons, he said, the state should have learnt from the second wave of the pandemic, including the investigations into the hotel quarantine debacle and contact tracing.

The senior Coalition frontbencher also called on Premier Daniel Andrews to return from leave, saying "this is a major crisis and he should be home".

Ms Allan said Mr Andrews was receiving daily live updates on the Black Rock cluster, and that he was still talking to the state's public health team.

There have been more than 2200 applications from Victorians stuck in NSW seeking an exemption to the hard border closure, with 175 of those processed.

Ms Allan could not say how many exemptions had been granted, but revealed more resources were being deployed to the team that examines the applications to streamline the process.

Changes were made to the National Agricultural Workers Code on Monday, paving the way for the agricultural workforce to complete farm work in Victoria and NSW.

Workers entering Victoria from NSW will be required to wear masks at all times and isolate when they're not working. They will only be allowed to leave their accommodation for food or in case of an emergency.

"We want to make sure that these important workers alongside essential workers can have that movement between the two states," Ms Allan said.

"It means that important work that makes a big economic contribution to our state and country can continue."

She said the hotels to be used by players and staff connected to the game had been signed off by COVID Quarantine Victoria and was "based on and ticked off" by the public health team.

bo, reopen, to, unlikely, Victoria
You may also like: