The Victorian government has refused to commit to adopting laws that would allow potential domestic violence victims to access the criminal records of new partners, despite some family violence groups and the opposition backing the changes.

On Monday, NSW Premier Dominic Perrottet announced the trial of a scheme that would let people at risk of domestic violence check if their partner has been convicted of similar offences. 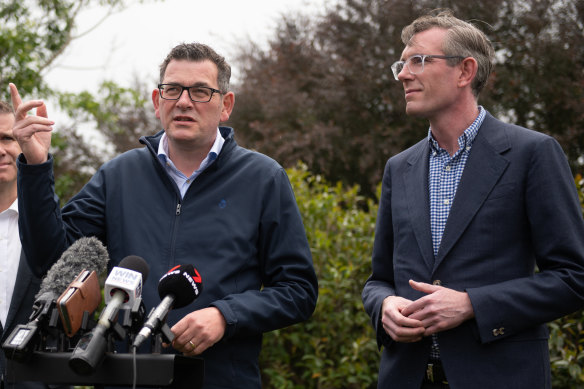 Victorian Premier Daniel Andrews and NSW counterpart Dominic Perrottet (right). The Andrews government will not commit to a “Right to Ask” scheme similar to that being trialled in NSW.Credit:Jules Boag

Under NSW’s 12-month “Right to Ask” trial – based on Britain’s domestic violence disclosure scheme known as Clare’s Law – police will be given the power to disclose relevant information about a perpetrator to new partners via an online portal or phone line. The information must first be approved by police and undergo privacy controls.

The reform is expected to be discussed at an online safety forum later this week, which will be attended by state and federal ministers, tech giants and the eSafety Commissioner.

At least 10 women were killed as a result of domestic violence in Australia in December – the deadliest December in a decade, according to Safe and Equal, Victoria’s peak body for specialist family violence services.

When asked if the Right to Ask scheme would be adopted in Victoria, the Andrews government refused to commit, instead pointing to reforms implemented since the 2015 Royal Commission into Family Violence, such as the Family Violence Information Sharing Scheme. Under that scheme, core workers can share relevant information about perpetrators with victim-survivors.

Brad Battin, state opposition spokesman for crime prevention, told The Age the Right to Ask scheme could play an important role in protecting people at risk of domestic violence.

“The Liberal Party is open to considering any measures that help reduce family violence and support giving people the practical tools they need to stay safe,” he said.

Some domestic violence groups say that with proper oversight, the scheme could be a step in the right direction, but they also argue there is more the government should be doing to help women and children at risk.

Full Stop Australia chief executive Hayley Foster said the organisation was “thrilled” with the NSW government’s commitment, describing it as a step towards preventing domestic violence and protecting people.

“We’re hoping that other states and territories will follow suit in what we see as a commonsense reform.

“This is an important step towards developing a national domestic and family violence offender register, similar to the existing sex offender register, to simplify the process of finding out about a partner’s history of violent behaviour no matter where they have lived.”

Chelsea Tobin, chief executive of Safe Steps, said Right to Ask laws were helpful as long as the process did not impose further trauma on domestic violence survivors.

“As with any legislation on domestic and family violence, it needs to be trauma-informed and recognise the complexity of coercive controling behaviours,” she said.

Even more pressing were issues around access to emergency accommodation for victim-survivors, Tobin said. She said more than 100 women and children checked in to hotels on Monday night because there was a lack of alternative options.

“This is the issue we want the government to commit to addressing. Right to Ask laws won’t have a significant impact on the women and children in danger tonight.”

Tania Farha, chief executive of Safe and Equal, said: “Schemes like a family violence offender register can look like a quick fix to prevent family violence, when what we really need is ongoing systemic reform and long-term social change.

“The Victorian Royal Commission into Family Violence set out a road map for these reforms and, nearly seven years on, the foundations are in place for a whole-of-system response to family violence in our state.”

Victoria has invested more money and resources into domestic violence prevention than any other jurisdiction, according to the government.

While there was a 1 per cent dip in the number of family incidents attended by police in the 12 months to September 2022, there were still 91,500 recorded across the state.