Victorian universities have moved up global rankings as new data suggests the country’s tertiary institutions made it through the first year of the pandemic in better shape than expected.

But universities are still predicted to face a grim few years as job cuts and student fee losses bite. 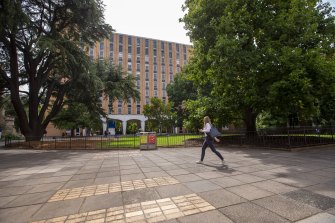 Melbourne University is moving up the rankings.Credit:Wayne Taylor

The University of Melbourne was the top-placed Australian university, at number 33 on the Academic Ranking of World Universities – up from the 35th slot in 2020 – while Monash University has also improved its position, going from 85th to 80th.

Higher education expert Ian Marshman said the results reflected a boom period for Australian universities before coronavirus, and this year would be tougher than last year because of the international border closure and lockdowns in Victoria and NSW.

“Preliminary reports indicate 2021 international student enrolments will be lower than in 2020,” he wrote with his University of Melbourne colleague Frank Larkins.

“2021 is now likely to be the proving ground for the strategies and pandemic responses each university adopted, whether explicitly or implicitly, in the first year of the pandemic.”

The pair analysed the annual reports of Australia’s public universities and found they weathered 2020 better than had been forecast, even after missing out on the federal government’s wage-replacement scheme, JobKeeper.

“The overall impact on revenues has been significantly less – at $1.8 billion – than the $3 billion to $4 billion initially predicted by several commentators including ourselves,” they wrote.

“Having experienced only a 5.2 per cent decline in total revenues, universities appear to have been extraordinarily resilient, particularly when university sector ineligibility for … JobKeeper and other pandemic business support is taken into account.”

Federal Education Minister Alan Tudge said on Monday that universities had suffered more from reduced earnings on investments than a reduction in international students, and called on them to diversify their revenue sources by commercialising their research.

“The government has already provided significant support to the sector and we continue to do so,” Mr Tudge said.

“Of course when student numbers do come back, we need to do it differently. To get greater diversity, to have better alignment with skills shortages, and to ensure that the student experience of international and Australian students is maximised.”

However, consulting giant EY has warned that Australia’s international student numbers will not return to 2019’s pre-pandemic peak, and higher education revenues could slump by a further $6 billion by 2030, threatening the viability of some institutions.

“If the government chose to give a higher percentage of the full cost of research, then that would remove pressure on the universities to find other sources of income,” Professor Maskell said.

“It would give us more freedom, in fact, to choose how many international students to take and how to set that entire system up.”

global, move, Uni's, up, Victorian
You may also like: