Victoria has recorded no new local cases of coronavirus after mask-wearing rules were reintroduced at midnight to combat a growing number of cases and high-risk exposure sites and the state government meets to discuss further restrictions.

Health authorities reported 11 new cases yesterday but 10 of those are officially included in Thursday’s figures. Two schools have closed after one of the new outbreaks spread to regional Victoria.

All 10 of Thursday’s cases are linked to the current outbreaks.

Eight of the government’s most senior cabinet ministers were meeting on Thursday morning to hammer out a new plan to deal with the fast-moving outbreaks.

Victoria’s latest coronavirus outbreaks are both offshoots of Sydney’s Delta clusters: three Sydney removalists who breached their permit conditions and a person who returned from Sydney and was supposed to be isolating at home.

Western Australia on Wednesday enforced new border restrictions on visitors from Victoria, who must isolate for 14 days upon entering the state, while South Australia also tightened restrictions for Victorians, requiring them to undertake a COVID test within 24 hours of arriving and not enter high-risk settings such as aged care for 14 days after arriving.

Four of the cases announced on Wednesday were residents of the Ariele Apartments complex at Maribyrnong in Melbourne’s north-west. The parents of one of those residents, a man in his 60s, also tested positive, making cases five and six.

The seventh reported cases was a man in his 30s who visited the same Coles in Craigieburn Central as an infectious City of Hume resident.

Case eight was a teacher from Bacchus Marsh Grammar who watched the Carlton versus Geelong AFL match at the MCG on Saturday with a friend who lives in the Ariele Apartments.

Two of his family members have also tested positive, becoming cases nine and 10.

Both Bacchus Marsh Grammar and Barwon Heads Primary School remain closed today after one of the positive cases visited each school.

Victorian restrictions expected to be tightened

The Victorian Department of Health announced late on Wednesday evening that mask-wearing rules would be reintroduced from midnight. 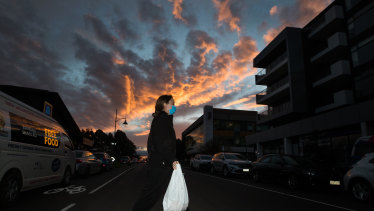 A Victorian government worker carries food into a locked down apartment complex in Melbourne’s north-west.Credit:Jason South

Masks must be worn in all indoor areas, including in all workplaces and secondary schools.

Tighter restrictions for Victoria are expected to be announced at a press conference late on Thursday morning.

The eight senior cabinet ministers who are meeting on Thursday also met on Wednesday night. They include Premier Daniel Andrews.

Some experts have called for a return to work-from-home rules, while other restrictions announced on Thursday could include indoor crowd limits and restrictions on the number of visitors permitted in homes.

“We have seen increasing cases over the last few days, more exposure sites every day and we know that if we go early with lockdowns, the earlier we go, the shorter they need to be,” he said.

“We need to get on top of this and we still don’t really understand the scale of the number of cases that have been created at the moment. I would really support an early lockdown.”

The health department listed more than 30 fresh exposure sites late on Wednesday including medical and dental clinics, a variety of shops at a DFO in Bundoora and an ATM at Campbellfield Plaza.

Also added in after 11pm were two sporting clubs in the tier 1 category. Barwon Heads Football and Netball Club (players and coaches) on July 12 from 4.30pm to 6pm and the Craigieburn Sporting Club on July 12 from 10.45am to 2.30pm.

Spectators at the Barwon Heads Football and Netball Club on July 12 from 4.30pm to 6pm should get tested according to tier 2 rules.

There were 27,061 COVID-19 test results processed in the 24 hours to midnight on Wednesday, and more than 15,161 people received their vaccine doses.

aga, INDOORS, Mask, up, Victorians
You may also like: