Victoria’s heatwave won’t just physically exhaust us, but be mentally taxing too

After an unusually cool and wet spring, the state is now in the middle of the summer’s first heatwave. A top of 37 is forecast for Melbourne on Tuesday, while temperatures are to reach the low 40s around the Mallee and Wimmera regions in the state’s north-west, before a cool change arrives late on Wednesday. 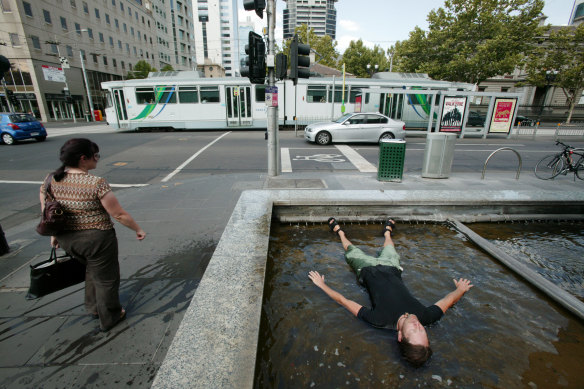 People will look for ways to keep their cool when high temperatures sweep Victoria this week.Credit:Erin Jonasson

Heatwaves are Australia’s deadliest natural disasters, killing more people than fire, floods and other disasters combined. But only in the past decade have researchers started to discover how they affect people mentally as well as physically.

“Your tolerance for anything is less when you’re hot and bothered. People become more violent, more mentally unwell,” she said.

“It may exacerbate depression. Domestic violence incidents can go up. And people tend to drink a bit more alcohol.”

A 2015 study, using survey data from more than 12,000 Australians, found temperatures over 30 degrees led to a deterioration in mental health equivalent to the effect of being unemployed, a feeling that could last for several months. A study from Adelaide found a 7.3 per cent increase in mental health hospital admissions during heatwaves.

A systematic review of international studies, published in 2018, found an increase in a wide range of mental illnesses, including schizophrenia, as well as in suicide risk during periods of extreme heat. A study published in JAMA earlier this year showed that as temperatures rise, so do hospital visits for substance misuse, anxiety, stress and other mental health conditions.

“They feel that there’s just no escape from the heat. It grinds them down,” he said.

It’s not clear why heat wears us down so badly. But data published in Environment International by an Australian team this month suggests the cause may be partially genetic.

Monash University Professor of Planetary Health Yuming Guo and his team used blood taken from 479 twin sisters in Australia to study how heat affects the way genes express themselves.

Genes are the instruction book for our bodies. But they are not static – they get “marked up” by our environment, a bit like writing notes in the book’s margin. These markups change the way our genes operate.

The study’s twins shared DNA, which allowed Guo’s team to pick out the effect of their environment on their gene expression. 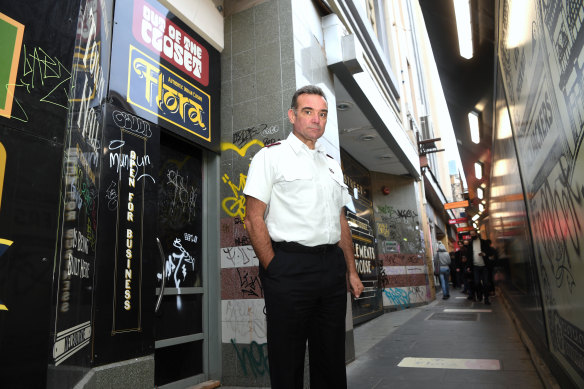 The Salvation Army’s Brendan Nottle is concerned about how heatwaves affect people who sleep rough.Credit:Justin McManus

By measuring the temperature where each sibling lived on the day blood samples were taken, they could show extreme temperature fluctuations changed the expression of a range of genes that are linked to mental and physical health.

“If the temperature is not stable over several days, people with mental disorders … they are much more vulnerable,” Guo said.

Natural Hazards Research Australia chief executive Andrew Gissing described heatwaves as a “social disaster” because most related health effects are preventable if measures were in place.

The elderly, people who live alone, the less wealthy or those with existing chronic or mental illnesses are the most vulnerable.

“If you don’t have a car or access to transport, it’s harder for you to access a cooler place or see a doctor,” Gissing said.

Nottle is most worried about elderly people who live alone.

“I consistently hear from people who … won’t switch the air-con on because they can’t afford it. They live in small flats or apartments and they heat up – they are literally like an oven,” he said.

“When we go through moments of … extreme weather, I think the temptation for a lot of people is to focus on self-preservation. But it’s during those times we really need to be looking out for others.”