Video appears to show George Santos dressed in drag in 2005

The fabulist looking fabulous: 2005 video appears to show George Santos bragging about dressing in drag and performing in Rio de Janeiro clubs – that has surfaced hours after he DENIED the claims

New video has surfaced on Thursday appearing to show New York Republican Rep. George Santos discussing his participation in drag shows in Brazil, according to an explosive report.

Video obtained by the New York Post purportedly depicts Santos, speaking in Portuguese, listing off the venues at which he did ‘presentations’ – all of them being prominent drag venues around Rio de Janeiro.

It was reportedly taken in 2005 at a Pride Parade in Rio’s suburbs.

‘I do presentations at 1940 in Jacarepagua, I do Cascadura, I also did Cabaret Casanova in Gloria and I did one at Le Boy,’ he reportedly said.

Santos goes on to praise the LGBTQ event as ‘good, well-organized.’

He told the Post regarding the video, ‘Absolutely false and just another bit of nonsense from the pile on effect I’m dealing with.’ The beleaguered New York Republican  denied a pair of unseemly allegations on Thursday morning, as questions mount over the the freshman lawmaker’s unraveling backstory.

He called claims that he ‘performed’ as a drag queen named Kitara in Brazil circa 2008 ‘false,’ while also calling accusations that he swindled a disabled veteran out of medical dollars for his sick dog ‘insane.’

Santos, who is under growing pressure to resign as details of his backstory continue to unravel, was identified in a 15-year-old photo depicting two drag queens on Brazil’s Icaraí Beach. 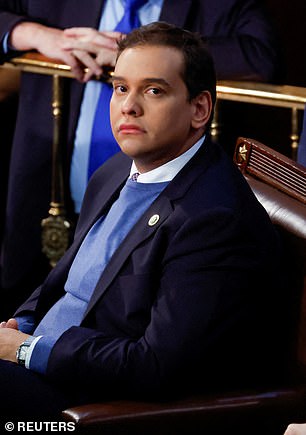 Embattled freshman Republican Rep. George Santos of New York has been under growing pressure to resign as key details of his backstory continue to unravel. He has thus far refused to step down

A Brazilian drag queen named Eula Rochard told independent journalist Marisa Kabas that she was the other person in the photo and named Santos, now 34, as her friend alongside her.

Rochard described Santos to NBC News as having an ‘outgrown sense of grandeur’ and said he lied frequently.

She said Santos was ‘never the type of drag queen who could hold down the show.’

Santos’ critics have made clear that their issue does not lie with his alleged cross-dressing, but rather the hypocrisy of aligning himself with ideologies in the Republican Party that actively oppose LGBTQ lifestyles.

But the freshman congressman denounced the claim as ‘false’ and accused the media of chasing ‘outrageous’ stories.

‘The most recent obsession from the media claiming that I am a drag Queen or “performed” as a drag Queen is categorically false,’ Santos wrote on Twitter Thursday morning.

‘The media continues to make outrageous claims about my life while I am working to deliver results. I will not be distracted nor fazed by this.’

He’s rebuffed all calls to step down, and since getting to Capitol Hill, has appeared to align himself with conservative lawmakers – many of whom have made opposition to community drag shows a cornerstone of their culture war platforms.

But in the 2008 photo, the person identified as Santos appears to be dressed in a strapless red top or dress while sporting longer brown hair. While the photo is grainy, some element of makeup is visible.

His Democratic critics accused Santos of hypocrisy for aligning himself with people whose ideologies see the drag community as an object of scorn.

Santos’ Congressional office did not return a request for comment sent by DailyMail.com on Wednesday night. On Thursday morning, Santos lashed out against claims that he once performed as a drag queen in Brazil

Two acquaintances of the beleaguered congressman told Reuters in a late Wednesday report that Santos participated in Brazilian drag shows a decade and a half ago.

One of those people was Rouchard, who claimed Santos was involved in Rio de Janeiro’s cross-dressing scene since around 2005.

Rochard reportedly recalled Santos going by ‘Anthony’ rather than ‘George’ at the time. She said she was in her late teens when she knew Santos.

‘Anthony Devolder’ was also the name Santos used when he allegedly scammed a disabled veteran out of charity money to save his dying dog.

Santos reacted to that accusation on Twitter Thursday, The reports that I would let a dog die is shocking & insane.’

‘My work in animal advocacy was the labor of love & hard work. Over the past 24hr I have received pictures of dogs I helped reduce throughout the years along with supportive messages,’ he wrote. ‘These distractions won’t stop me!’

Navy veteran Rich Osthoff, who was homeless at the time, told CNN he was connected to Santos as someone who had experience rescuing animals when his service dog, a pit bull named Sapphire, developed a tumor.

Santos purportedly set up a GoFundMe for the dog. But after he raised $3,000 he reportedly became hard to reach and eventually disappeared with the funds.

And House Republican leaders guaranteed that Santos will have his own Congressional workload, despite mounting concern over his place on Capitol Hill.

He’ll be serving on two committees in the 118th Congress – the Small Business panel and the Committee on Science, Space and Technology.

Meanwhile, Santos is under federal and state investigations as well as a Congressional ethics inquiry amid questions over how he came about his recent personal wealth, including the $700,000 he donated to his 2022 campaign.