A brave diver saved a ‘frightened’ giant sperm whale that he has ‘known’ for a decade – by slashing through ropes that had become wrapped around its lower jaw and anchored to the bottom of the ocean.

After Hugues Vitry heard about a tired whale dragging a line of buoys eight miles off Mauritius on May 15, he knew he had to help the stranded animal, which he had been following since it was born in 2011.

Mr Vitry jumped into the water alongside the 33ft mammal and quickly spotted its jaw was entangled with rope that disappeared more than 1.3 miles to the Indian Ocean floor – dragging the whale’s mouth wide open. 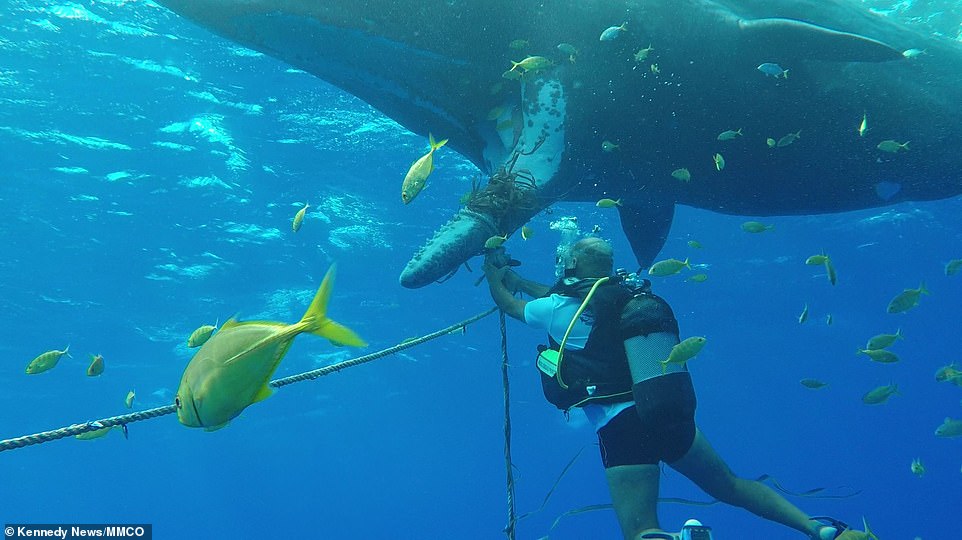 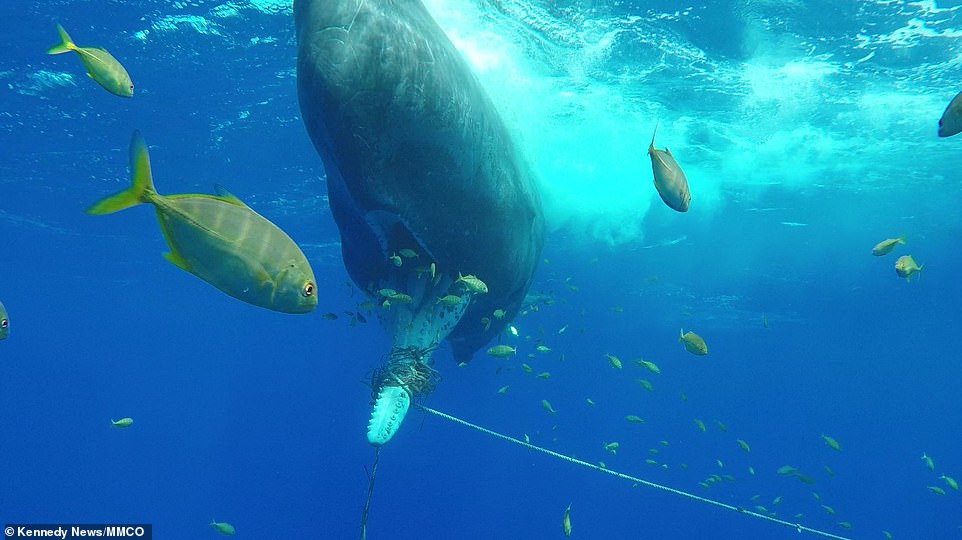 The buoy on the end of the rope was making it more difficult for the whale to swim. According to Mr Vitry, the whale was exhausted by the exertion 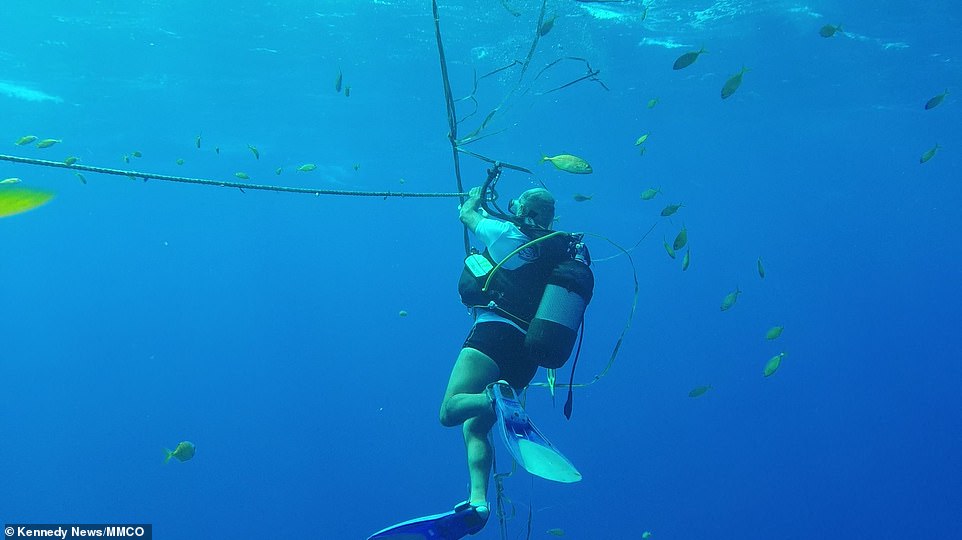 After taking a few minutes to calm the whale, footage shows Hugues painstakingly cut the ties with special scissors, making sure not to damage the flesh.

Having removed the majority of the rope from around its teeth, the whale plunged down into the deep to escape – before the freed buoys resurfaced minutes later.

Mr Vitry, president of Marine Megafauna Conservation Organisation (MMCO), said: ‘I have known this whale since he was born in 2011.

‘The animal was facing us and he also recognised me because I have been studying the pod and we are regularly in water with them.

‘I could see that his eye was wide open in fear, like that of a frightened horse. I went over to him and stroked him to calm him down.

‘After a few seconds he closed his eye as if he was sleeping, I got down and started to assess how I was going to free him.

‘One end of the ropes was anchored far down into the blue at the bottom, some 2000 metres below.

‘At such depths, the pressure of even a slight current on the rope is very high at the surface on the rope and it was pulling on the lower jaw, forcing it to open as wide as possible. 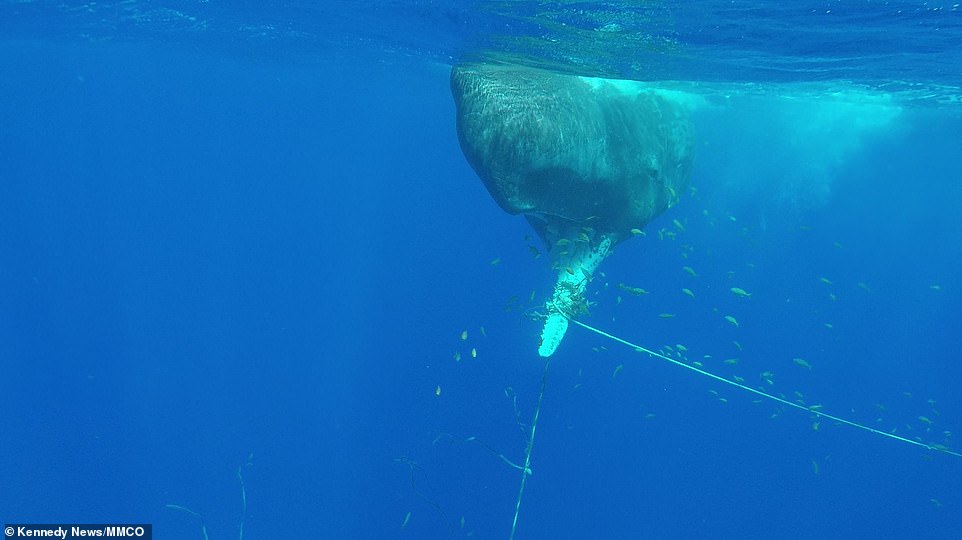 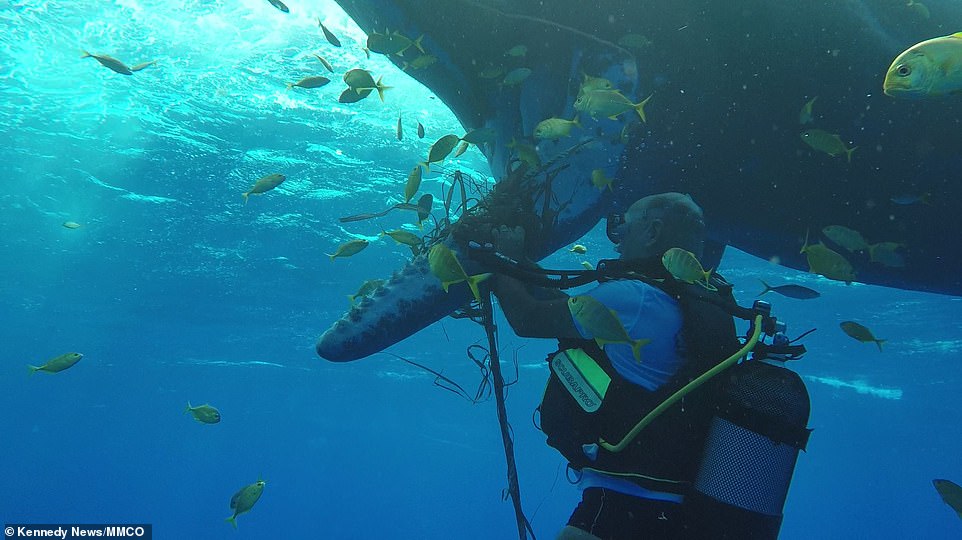 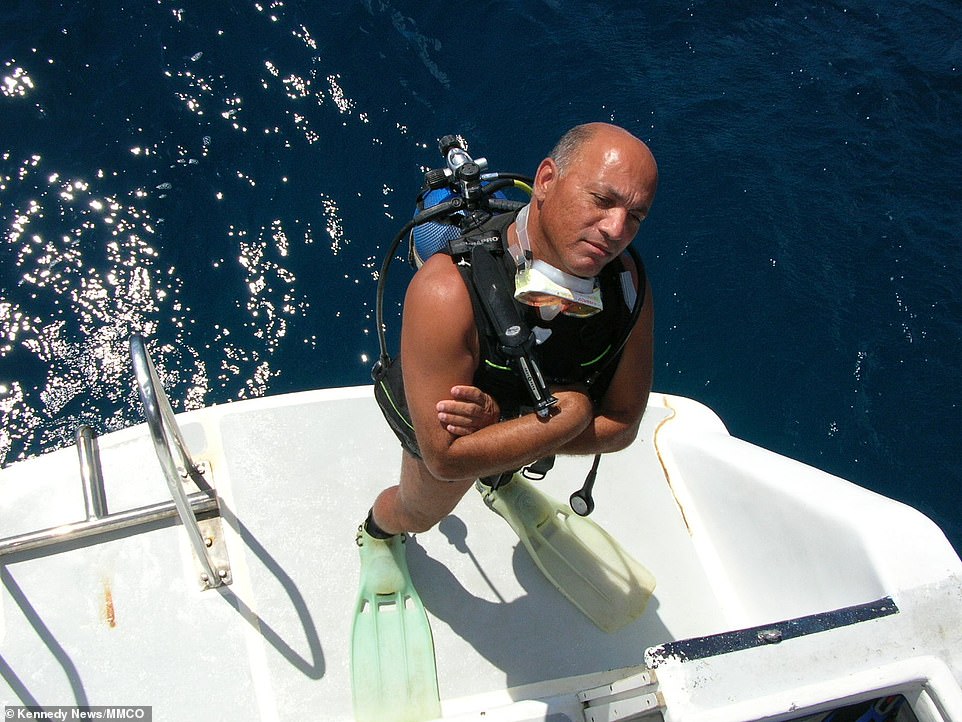 Mr Vitry, pictured, and his team used a special set of scissors to cut through the ropes

‘The ropes were so tightly wrapped around the jaw, I knew using a knife would certainly have also cut into the flesh, so I opted to use special scissors to cut the entanglement.

‘There was a part of the rope where two shackles were connected to each other that acted as a swivel that was trapped on and in between the teeth.’

Mr Vitry and his team had already identified the whale as one they had been tracking for ten years and called ‘tache blanche’ or ‘white spot’ due to distinctive markings on its stomach.

MMCO has been studying sperm whales off the west coast of Mauritius for the past decade.

Mr Vitry said: ‘He was blowing large amounts of water, much more regularly and much louder than usual. He was swimming in a circular fashion, dragging more than two dozen round buoys behind him.

‘As we approached, he dived, pulling on those floats with considerable effort. He stayed underwater for many minutes, then surfaced, completely exhausted.

After removing the ropes the buoys floated to the surface. Mr Vitry said he and his colleagues removed them from the water and took them to port so no other whales could be jeopardised by them. 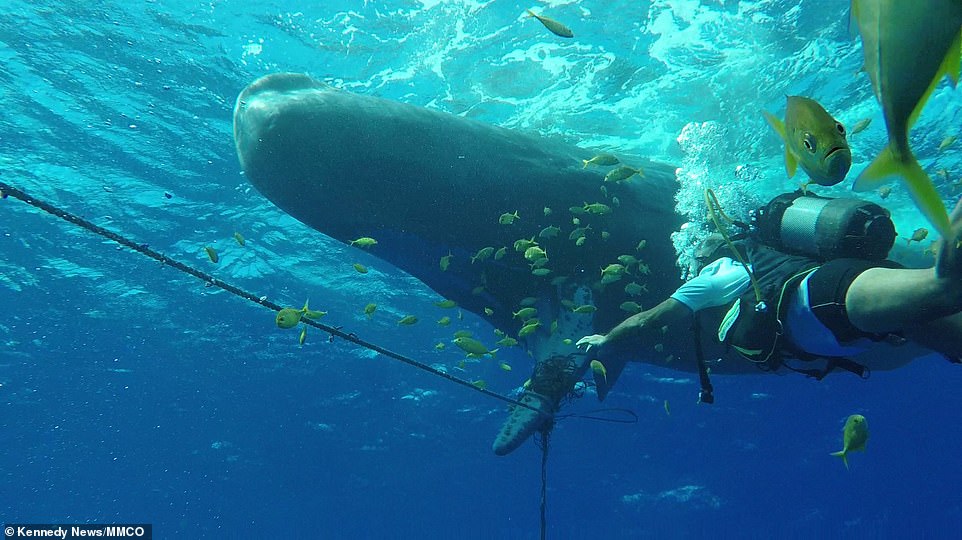 According to Mr Vitry, it was clear the whale was in distress as he was dragging more than two dozen buoys behind him 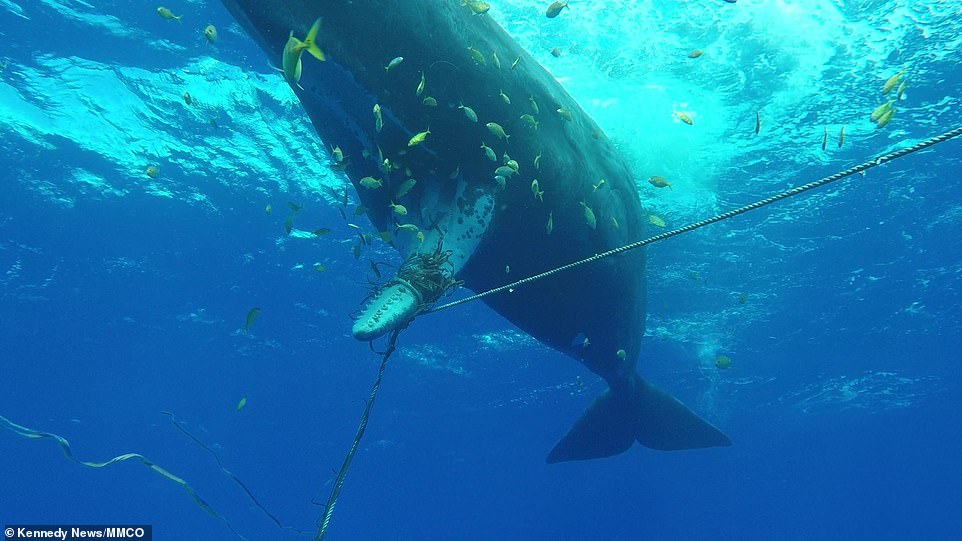 diver, Saves, sperm, video, whale
You may also like: