Shocking footage shows the moment a young man diced with death on a level crossing as he stumbled across the live railway tracks just moments before a train thundered past.

The worrying CCTV has been released by Network Rail as part of a warning to student freshers following the near-miss in the heart of Lincoln’s city centre.

The video shows a young male in black jeans and a grey hoodie, who appears intoxicated, ignoring the obvious alarms and climbing over the barriers of the level crossing to cross the railway tracks.

Just four seconds after he clears the two live tracks on Lincoln High Street, a heavy freight train storms through at around 100mph, blaring its horn.

All the while, the man seems oblivious to the danger.

The footage was released as a ‘lesson in rail safety’ to the latest cohort of students starting at University of Lincoln.

With more than 200 trains speeding through this busy level crossing each day, Network Rail said it was ‘paramount’ to both newcomers to the city and long-term residents to know how to use it safely.

‘The level crossing on Lincoln High Street is a busy and active route across the railway, and it can present a real danger if not used correctly.

‘People need to be well aware of the dangers, pay attention to the unmissable alarms, and remain vigilant when crossing the tracks, particularly while under the influence.

‘We’ve worked with our rail industry partners to deliver a hard-hitting lesson for new students at the University of Lincoln and help people understand how to stay safe around the railway.’ 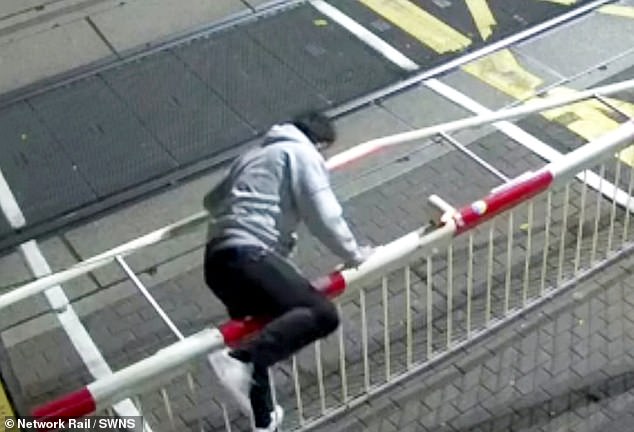 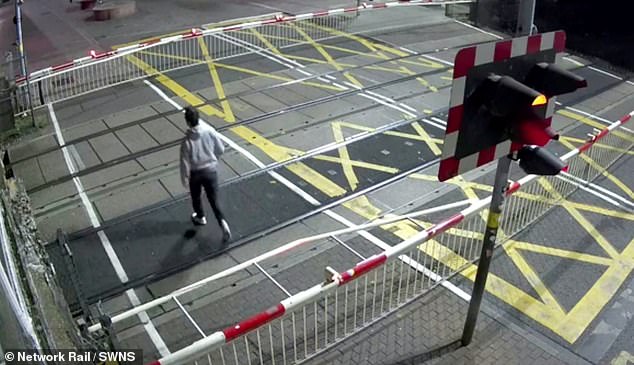 They delivered a vital safety session for freshers as part of the University of Lincoln’s ‘staying safe on a night out’ week.

These tips are: it is easy to get distracted, especially by phones, music and conversation; stop, look and listen, follow signs and instructors; check both ways before crossing; if there is a train coming, don’t cross; understand the warnings (lights, barriers, alarms).

BTP Chief Inspector Rick Sweeney added: ‘The railway is no place to take a shortcut.

‘Getting somewhere a little quicker is not worth the risk, and we have seen first-hand that this can lead to tragic consequences or life-changing injuries – both outcomes are avoidable. 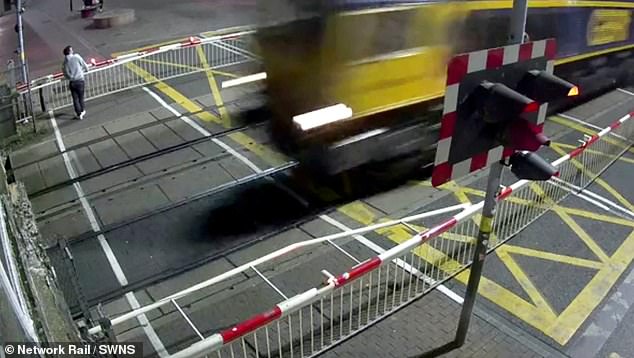 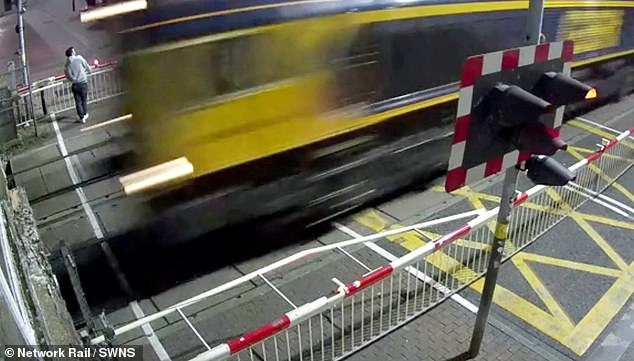 ‘There is simply no excuse for not following the safety procedures at level crossings.

‘Trains travel at speeds of up to 125mph, sitting wider than the tracks they run on and often quieter than expected.

‘The person involved shows a reckless regard for their own lives, as well as the safety of train passengers and railway staff.

‘Ignoring warning signs and instructions at level crossings can have devastating repercussions, especially while under the influence and we hope this footage provides an important reminder that people should always follow the rules and remain alert when crossing the tracks.’