An Ohio police officer is on leave after he was seen in a cellphone video repeatedly punching a Black woman in the face, leaving her with a bloodied lip, following a dispute over a slice of cheese.

The incident Monday just before 5 p.m. began when Butler Township police Sgt. Todd Stanley and officer Tim Zellers were called to a McDonald’s because of a disturbance. Staff requested that the woman, Latinka Hancock, “be formally trespassed from the property” after she got into a dispute with an employee, Chief John Porter said at a news conference on Wednesday.

Porter said the officers repeatedly asked Hancock to identify herself, which he said is a requirement when officers need to issue a trespass notice. When she refused, the officers attempted to place her under arrest, the chief said. During the arrest, Sgt. Stanley struck Hancock, his police body camera footage shows.

In the footage, which was played at the news conference, Hancock explained that she got into a dispute with an employee because she paid to have extra cheese on her burger but the sandwich did not include it. Stanley said that he needed to issue a trespass notice and asked Hancock for her information but she refused to give it to him.

“You’re going to make it more difficult than it has to be,” the sergeant said, according to the footage. 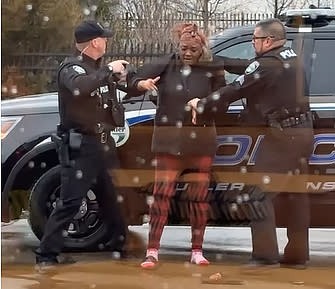 “If you arrest me I promise you’re going to have a problem,” Hancock responded.

Things escalated and Hancock is seen in the video raising her voice at the officers. Stanley told her that she was being disorderly.

Zellers body camera video, also played at the news conference, showed Hancock giving him her last name but she refused to provide him with any more information. Zellers told her she was under arrest.

Both videos showed Stanley hitting Hancock in the face following a brief struggle. She was arrested and charged with resisting arrest and failure to identify, police said. She also received citations for driving under suspension and having an open container of alcohol in a vehicle.

Michael Wright, an attorney for Hancock, said at a news conference that the “incident should have never occurred.” He said McDonald’s should be “ashamed” for calling the police and condemned the officers’ handling of the situation.

According to Wright, Hancock left McDonald’s when a manager told her to leave. She waited outside the eatery so she could explain what happened to the police.

“This is an incredibly sad day when Ms. Latinka Hancock’s life has been upended over a piece of cheese,” he said.

The incident left Hancock with a busted lip, loose teeth, a closed head injury, and a back injury, Wright said. McDonald’s did not immediately respond to a request for comment.

Hancock told reporters that she was “scared” because of her interactions with the officers.

“That video shows a woman explaining herself,” she said. “When he asked me to identify myself it wasn’t that I’m trying to be belligerent … it wasn’t that. It’s over a sandwich, a sandwich that I have to literary now sign a paper over trespassing.”

She continued: “If it would have been done right, I wouldn’t have had to come back. … But because I just tried to come back and get it at least figured out, I almost lost my life behind it. The reason why I said I’m going to be quiet now, I’m going to stand up, I’m not going to be George Floyd.” Floyd, a Black man, was killed during an arrest by Minneapolis police in 2020.

NBC News could not immediately reach the police officers Friday at phone numbers listed for them.

Attorney Wright called for Stanley’s firing and said the sergeant should be charged with assault.

“The way he handled Ms. Hancock was despicable. This was brutal and so unnecessary,” he said.